Good evening and welcome to our live blog of the Eredivisie Sunday. I am Robbert van der Linde and I will keep you informed of the latest developments in the Dutch fields.

Ajax-AZ · a few seconds ago

26 'Martínez has a bit of patience and position play and tries to surprise Bizot from distance, but the AZ keeper sees the Argentinian's weak and moderately aimed shot coming from far away.

Ajax-AZ · a few seconds ago

26 'The game comes to a halt for an injury treatment at Promes. The attacker of Ajax is in a lot of pain, but can continue the match for the time being.

That AZ takes the lead is not surprising when you look at the statistics. The Alkmaarders have now taken the lead in twenty of their 24 Eredivisie matches, most of all clubs. Ajax and Feyenoord follow with eighteen.

22 'Onana keeps Ajax going! AZ is back in no time at all in the counter-blow, after which Idrissi finds the incoming Midtsjö. The Cameroonian keeper prevents his team from falling behind by throwing himself like a lion in front of the ball.

Myron Boadu has managed to score more goals this season alone against the traditional top three than ten Premier League clubs in total.

5 - Myron Boadu has scored five Eredivisie goals against Ajax, Feyenoord or PSV this season, more than 10 of the 18 current Eredivisie sides. Colossal.

15 'Ajax tries to take the initiative after the quick hit. The Amsterdammers manage to do that nicely, but that is also because the people from Alkmaard have them make the game. The team of Arne Slot defends solidly and lurks on the counter with its super fast attackers.

Myron Boadu passes André Onana and shoots the opening goal on the scoreboard.

Daley Blind is disappointed after the 0-1, which is largely his responsibility.

9 'Ziyech has a world goal in mind with a volley, but finds out that his right is slightly less than his left. He doesn't even hit the ball halfway, he hits it for a quarter, after which the ball doesn't even reach the back line.

Myron Boadu is cheering away after he has made the opening goal. Just as in the home match, the young striker scored a goal against Ajax, only Cyriel Dessers succeeded this season too. It is Boadu's fourteenth competition goal this season.

7 'Tagliafico is sent deep on the left and almost reaches Ziyech with a cross. Before the Ajax attacker can fill in, Wijndal throws himself in to head the ball away.

All the more reason to laugh with AZ coach Arne Slot, who sees his team experiencing a dream start in Amsterdam through Myron Boadu.

Ajax gives AZ the opening goal on a silver platter. A dramatic pass by Daley Blind is intercepted by Jordy Clasie. He can then put Myron Boadu in front of André Onana, because Blind cancels offside. The striker of the Alkmaarders stays cool and comes in through the inside of the post.

2 'Ajax is quickly creating danger for the first time through Promes and Tadic. The Serbian heads a shot from the left winger as a shot, aimed at Bizot, who keeps the ball out of his goal with a reflex.

The wishes of Ajax supporters after the European elimination are clear.

1 ' The ball is rolling in the Johan Cruijff Arena! The top match between Ajax and AZ has started, a delicious dessert of this Eredivisie weekend.

The gladiators enter the arena (literally), the battle is about to begin.

Also nice for Ajax is that left back Nicolás Tagliafico is back again. The Argentinian 'gaucho warrior' was missing against Getafe last Thursday due to a suspension.

Hakim Ziyech prepares for his return to the base. How fit is Ajax's playmaker?

Both Ajax and AZ are praised for the attacking possibilities, but this game is also a battle between the two best defenses of the Eredivisie. The Alkmaarders have seventeen goals against the least passed defense, the Amsterdammers follow with twenty. AZ goalkeeper Marco Bizot already kept the clear sixteen times, his Ajax colleague André Onana was not passed in eight matches.

AZ already won against Ajax earlier this season, just as it did against Feyenoord and PSV. "Those were not stolen victories," says trainer Arne Slot. "In those duels we were able to work very hard even without a ball. Furthermore, Ajax was particularly dangerous on the counter. That is another weapon today, you get room to play against Ajax. They are very strong on the ball, but once you conquer the ball, there are many spaces. If we use it, we can achieve a good result. "

How does Ajax-AZ end today?

Erik ten Hag reacts at FOX Sports to the absence of Ryan Babel. "He is not fit, he has calf complaints. That happened last Thursday (against Getafe, ed.), He has not been training since then. It is an overloaded calf muscle, we will have to see when," said the trainer, who states that Ajax has processed the European elimination and is happy that the infirmary is getting a bit more army. "We were not good enough at the time, we have to accept that and leave it behind quickly. We still have enough to play for with the competition and the cup. The competition is now the most important thing. players return from injuries, for example, it is very nice to be able to play with Ziyech and Promes again tonight. We have to wait and see whether they are top fit and can play ninety minutes. "

Earlier this season, AZ won 1-0 against Ajax in Alkmaar. The game seemed to be heading for a scoreless draw, but Myron Boadu scored in the last minute. The striker of the Alkmaarders can become the second player after Cyriel Dessers of Heracles Almelo to score against Ajax in both league matches this season.

The players in the Johan Cruijff Arena have started the warm-up, with the keepers as always slightly earlier than the field players. Another half an hour until the kick-off.

The position in the top of the Eredivisie prior to Ajax-AZ.

The draw at PSV-Feyenoord allows Ajax to take a big step towards the national title. With a win tonight, the team from Amsterdam increased their lead on AZ to six points, the margin on Feyenoord to nine and put the PSV on ten points.

Do you know better? You can bet from as little as 1 euro. Bet here and win!

Setup! These are the eleven names of AZ for the top player in Amsterdam. Arne Slot chooses the same names as Thursday against LASK:

An image that will make Ajax fans happy. The shirts of Ziyech and Promes are ready for the kick-off of 8 p.m.

Ajax with Ziyech and Promes against AZ
Ajax now also confirms the earlier setup of FOX Sports . Hakim Ziyech and Quincy Promes start in the basics! Ryan Babel is not even on the couch, because according to Ajax he is "not fit for a match".

The AZ players have now arrived in Amsterdam. A little less than an hour and a half until the kick-off.

Past! Sparta Rotterdam is booking a nice home win at FC Emmen. It will be no less than 5-1 at Het Kasteel for the team from Rotterdam, who is now firmly in 11th place in the ranking. FC Emmen remains twelfth.

It is also a big win for Sparta, because after a nice attack Rayhi puts the ball down for Harroui and he scores.

There it is still 4-1 and this is also the decision in this game. A corner from Sparta came in through Emmen's Miguel Araujo. An own goal so.

81 'Bryan Smeets can decide the game, but the Spartan only hits the Emmen keeper for Telgenkamp.

76 'Another fifteen minutes on the clock at Het Kasteel. Sparta still leads 3-1 and seems to win this match. FC Emmen will have to score again soon to make it really exciting.

Setup! According to FOX Sports, these are the eleven names of Ajax for the home game with AZ. Hakim Ziyech returns to basics and so does Quincy Promes. Ryan Babel is therefore on the couch.

1️⃣1️⃣ | This is the line-up of Ajax with Hakim Ziyech and Quincy Promes. #ajaaz https://t.co/04as56WvkV

According to Ajax's press folder, Hakim Ziyech is not one of the injured ...

68 'Sparta is again the better team and the 4-1 is more logical than the 3-2. But you do notice that the home team has not yet won the bag.

61 'A quick changeover from Sparta ends up with Joosten, but his low cross / half bet goes through Heylen and the outside of the post next to the goal.

Well! FC Emmen and especially Michael de Leeuw seem to read the live blog. The attacker of the visitors signs for the 3-1 against Sparta and then Emmen can still hope for a good result.

52 'FC Emmen is really trying to make something of it, but the visitors will really have to score to reduce the tension somewhat.

46 'We are playing football again in Rotterdam! Sparta-FC Emmen (3-0) start the second company.

32 - @ SpartaRotterdam's three-goal lead after 32 minutes was their fastest 3-0 in an Eredivisie game since January 2008 (by De Graafschap). Triple.

It's peace! Sparta is doing well with a 3-0 lead against FC Emmen.

45 'The last minute of the first half is running. Sparta still leads comfortably 3-0 against FC Emmen.

Joy with Rayhi and trainer Henk Fraser after the 2-0 of the dribbler against FC Emmen. Sparta is already leading 3-0. 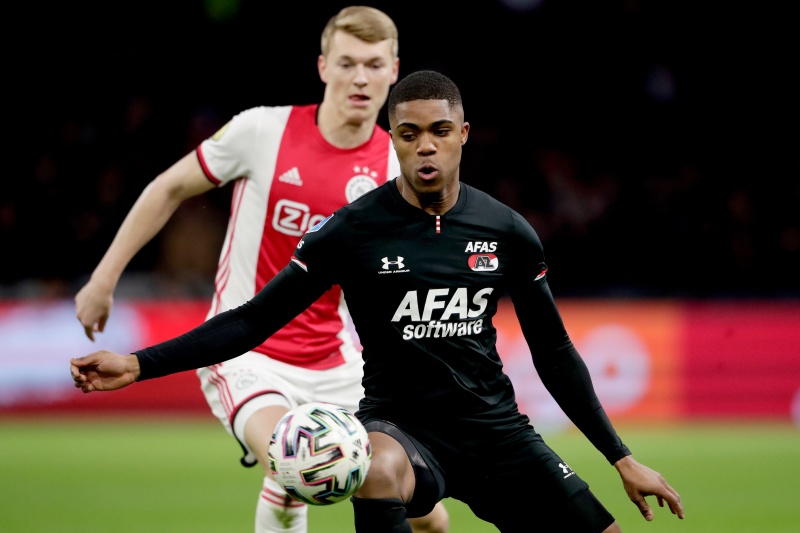 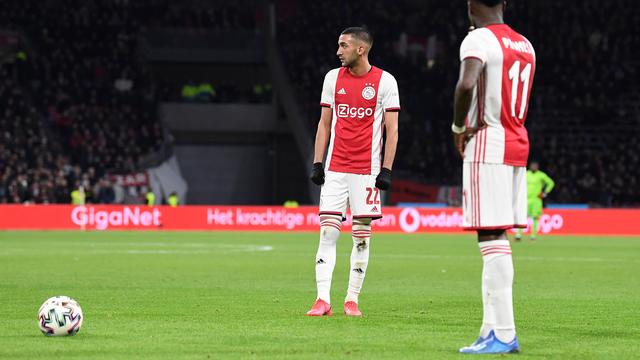 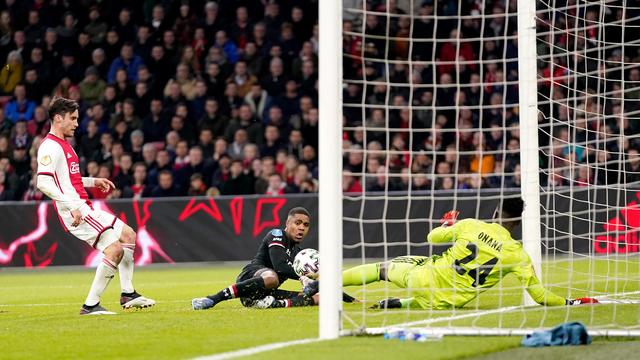 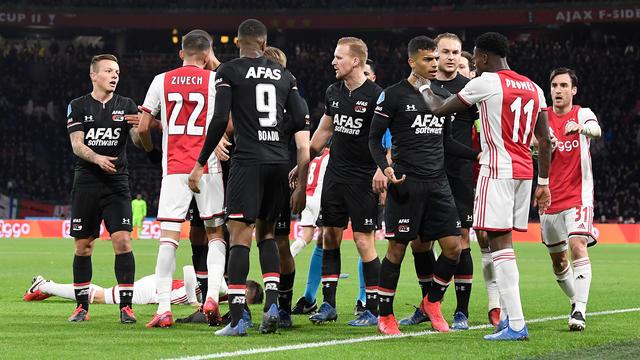