These twelve will take Sweden to the Olympics

Nathalie Fontaine is back in the squad that, starting on Thursday in Belgium, will qualify for the Olympics. - She is, of course, I think. The last time she joined last spring, she was an important cog in the team, says SVT's basketball expert Elisabeth Egnell. 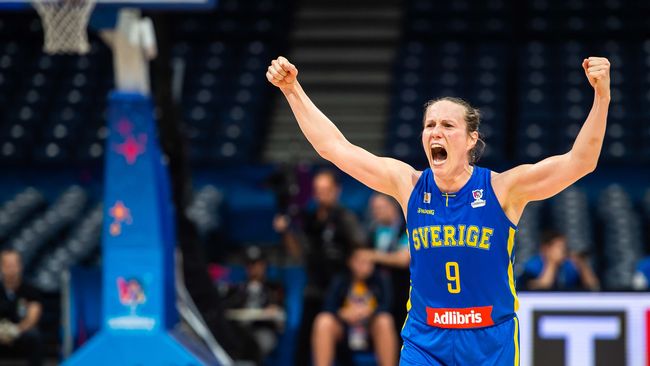 From a gross squad of 20 players, the Confederate captain Marco Crespi has now lost the squad to twelve players.

- The frame is intact from this summer's European final, with new additions in the form of Paulina Hersler, who has had a very good development in Slovenia, and Nathalie Fontaine, who is now back from the injury that prevented her from playing this summer. All the players who have been to the camp we have now finished have really shown qualities and we can conclude that the competition for the twelve places has probably never been tougher, says national team manager Fredrik Joulamo.

In addition to Fontaine, Paulina Hersler is also back in the squad.

- Cool. A very interesting name. She has had a great season and it is important that she is rewarded for being in shape. It feels fresh, Egnell says of Hersler's involvement.

The two who have been before, at the European Championships, but now placed outside the squad are Daniele Hamilton Carter and Josefin Vesterberg. Both are experienced and have been around for a long time, but now they get to watch when Sweden should try to make it historic - to make it to the first Olympics.

- It is probably a somewhat controversial move to lift Carter out, perhaps. But that these two are not included still feels reasonable. There should be super tough competition for the places, Egnell says.

- But if we can manage the qualification, then a new selection must be made, Egnell says, and says that no one has missed the Olympic train yet.

Swedish squad for the Olympic qualifiers:

The Olympic qualifier will be played in Ostend, Belgium on 6-9 February and in addition to the host nation, Sweden will face Japan and Canada. The two best besides directly qualified Japan from Sweden's group go to the Olympics.

- If Sweden goes to the Olympics it would be the biggest thing a Swedish national team has ever done. It is the last Olympic chance for the golden generation, who took silver in the U19 World Cup 2007, says Elisabeth Egnell.