The expert's guide to the Olympic qualification: "Most things should be about Zahui"

Sweden may be knocked out of the sub-world against world nations such as Japan, Canada and the home team Belgium, in the historic basketball qualifier you see directly in SVT. Should Sweden get to the Olympics, it is the biggest thing that happened to Swedish basketball. Here SVT expert Elisabeth Egnell looks more closely at the resistance and what Blågult must do to reach the Olympics. 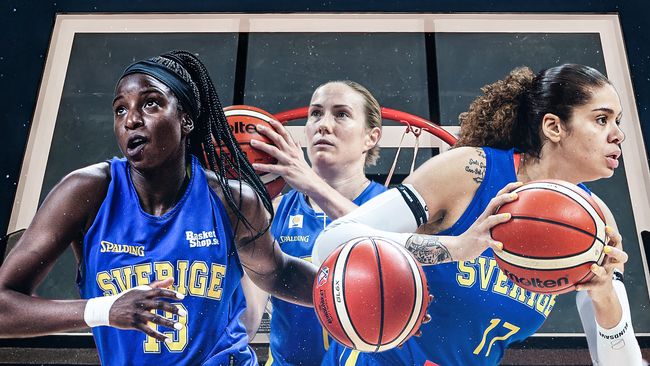 Sweden's chances of advancing from the group should be quite good, as three out of four teams move on. But unfortunately, Japan, which as host nation is directly qualified for the Olympic Games, was in Sweden's group and only two places remain to play. Fighting two plastics against nations like Belgium and Canada is a very tough task in all respects.

"Canada - medalists in all major championships"

Canada has made a tremendous development journey in recent years, and is now a medal candidate in all major championships. Virtually all of Canada's players have gone to college in the United States and are now pros in European leagues and the WNBA. Has previously had an identity linked to a tough and tough defense game with a solid team game as an engine, but now also has a number of world-class fixed stars in par with Sweden's Amanda Zahui.

Kia Nurse and Natalie Achonwa are the team's brightest stars, and Canada may be considered favorites in the group. The fact that the team is also preparing for the Olympic qualification in Japan to get acquainted with this summer's Olympic arena says a lot about the goals the team has set.

Has a complete squad with all the tools needed, where Emma Meesseman and Julie Allemand are a lovely duo who juggles basketball IQ. The team is coached by big shooter Kim Mestdagh's dad, and the squad also includes Swedish acquaintances Julia Vanloo and Marjorie Carpréaux, both of whom are guaranteed to offer great highlight clips during the tournament.

Belgium made a semi-bleached European Championship this summer based on the high expectations the team had on themselves, and is going through a difficult phase as a group when taking the step from being an underdog to an established nation.

Belgium is my favorite team since the World Cup in Spain 2018 and Sweden are set against them in their last match which is very likely to be decisive for both teams. The question then is how Belgium handles the pressure of playing at home.

The fact that you have to be tall to play basketball is only partially true, and that is proof of Japan. The tournament's most unconventional team traditionally sets up a good much shorter lineup than one usually sees on a basketball court, and the Asian basketball is also faster, wiser, plays with more passes and more movement without a ball.

The big question mark is how to handle these matches as you are already qualified for the Olympics. When Japan defeated both Australia and China in the Asian Championships last fall, it can be said that the preparation for the Olympics is well underway, despite the fact that you do not need to enter the qualifiers with a form top.

Japan is still the team that the players have the least control over and Sweden will have a length takeover in virtually all positions. Particularly dangerous are point guards Nako Motohashi, Ramu Tokashiki and Yuki Miyazawa. But here it is the collective that applies above all else.

See Sweden-Japan in the Knowledge Channel and SVT Play 17.55.