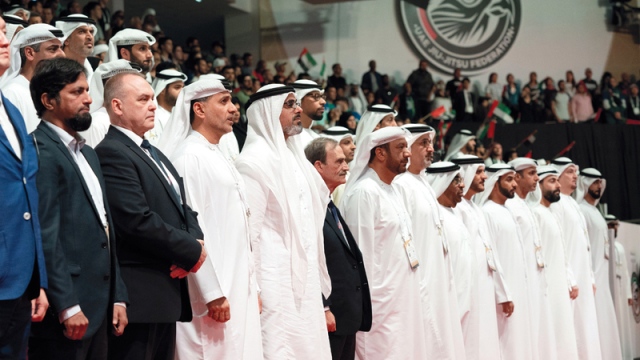 HH Sheikh Khalid bin Mohammed bin Zayed Al Nahyan, Member of the Abu Dhabi Executive Council and Chairman of the Abu Dhabi Executive Office, inaugurated the World Jujitsu Championship, held under the patronage of His Highness at the Mubadala Arena in Zayed Sports City, Abu Dhabi. With the participation of about 1500 athletes from 69 countries from different continents of the world.

The tournament establishes Abu Dhabi as the capital of the global jujitsu, organizing the largest tournaments, adopting the best programs to spread and develop the game in the world, hosting the headquarters of the Asian and international federations, as well as adopting the efforts of international accreditation of the game in continental and global organizations. His Highness attended the opening ceremony and a number of competitions, amid a large audience, and honored a number of winning heroes.

The UAE U-18 and U-21 champions finished the first day at the top of the standings with 34 colored medals, including nine gold, 10 silver and 15 bronze medals.

The opening ceremony started with the national peace of the UAE, followed by a speech from the Greek Federation Panayotos Theodoropoulos, President of the International Federation, in which he stressed that the UAE provides an example and always set an example of excellence, creativity and success, when organizing any sporting event, and is a forerunner in launching humanitarian and charitable initiatives. By the time of World Tolerance Day (yesterday), the government and people of the UAE were celebrating from the beginning of the year tolerance.

For his part, Chairman of the Organizing Committee, Mohammed Al Dhaheri, said the speech of the Jujitsu Federation, and valued the role of wise leadership in supporting sports in the UAE, said: «Recently yesterday we celebrated with our wise leadership (ambition Zayed embraces space), and throughout this year tolerance was the title The motto and practice of all state institutions, through our wise leadership initiative, is this year as a year of tolerance. In the midst of Dana Dunia Dubai's preparations to host the world's largest Expo 2020, this world championship brings together all the fans of various jujitsu under its umbrella, hoping to transform the dreams of the heroes into the podiums.

The opening ceremony was also attended by the President of the Asian and UAE Federations, First Vice-President of the International Federation, Abdul Moneim Al Hashimi, members of the Executive Office of the International Federation, the Secretary General of the Abu Dhabi Sports Council, Aref Al Awani, the Assistant Secretary General of the General Authority for Sports, Abdul Mohsen Al Dossari, and a large number of sports leaders.

The opening opera included three impressive paintings, written and supervised by the poet Aref Omar and sung by Ayda Al Menhali. The paintings were attended by 60 Emirati children, the first being titled "Zayed's Ambition", the second titled "Tolerance" and the third titled "Abu Dhabi, the Capital of the World." After the opera ended the queue began to the countries participating in the tournament, and then held the finals of some categories, where Sheikh Khalid bin Mohammed bin Zayed Al Nahyan, accompanied by Abdul Moneim al-Hashemi, and Panayotos Theodoropoulos, honored the first-place in those categories, most of which won the UAE champions.

Today, the tournament will see the continuation of the women's competitions in the junior and young women category, in a league system, followed by competitions for men and women. On the other hand, the Para Jujitsu category will be held tomorrow.

For tomorrow, the program also includes the "Combat System" category for women and men, accompanied by showcasing for men and women "Dua", then the team competition and medal ceremony.

On the 20th, the combat system for men and women, the parade for men, and the professors' class will be held the next day. On the 22nd, adult competitions for men will be held until the next day, while the final day will witness the competition of teachers.

The UAE champions of both sexes started the tournament strongly, winning 9 gold, 10 silver and 15 bronze.