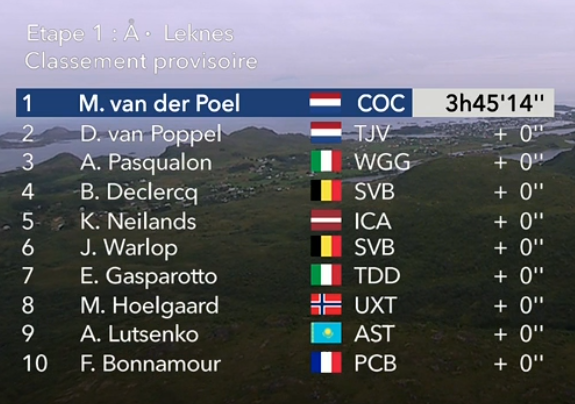 In the 181-kilometer ride between Å i Lofoten and Leknes, which included three climbs of the second category, 24-year-old Van der Poel was the strongest of a thinned peloton. Danny van Poppel (Jumbo-Visma) came in second.

Dimension Data's Steve Cummings seemed to be on his way to victory in the final kilometers, but he was caught shortly before the finish. No one subsequently had an answer to the sprint of Van der Poel, who is automatically the leader in the classification.

The Dutchman is making his comeback on the road in Norway since he impressed in April with a win from the Amstel Gold Race. He focuses on stage victories and works towards the World Cup on the end of September in Yorkshire.

"Everyone went full gas all day and I love that," said the stage winner. "A difficult situation arose in the last ten kilometers, but I took a sprint bet. I finally timed perfectly."

The cyclocross world champion has been active on mountain bike in recent months and with success. He won three world cup competitions, including Sunday's race in Lenzerheide, Switzerland.

Last year Van der Poel won two stages in Norway, where he eventually finished in 14th place. The final victory was after four days for the Russian Sergey Chernetskiy of Astana.

Van der Poel indicated on Wednesday that he would not go for the classification in the stage race this year. "The climbing here is a bit too heavy for me, so it's not a goal to go here for the overall victory."

The Arctic Race of Norway, which is not part of the WorldTour, will continue on Friday with an almost flat stage of 164 kilometers, starting in Henningsvaer and finishing in Svolvaer.