“You will defeat me today, and I will beat you tomorrow”: runner Semenya issued an ultimatum IAAF

Runner Custer Semenya will not take part in the September World Athletics Championships if she is not allowed to compete in the 800m race. This was stated by the South African herself after winning the American stage of the Diamond League. She stressed that she intends to continue the fight with the International Association of Athletics Federations (IAAF) for the right of women with elevated testosterone to start at the start, along with the other athletes. On her side stood a double medalist of the world championships Edge Wilson. 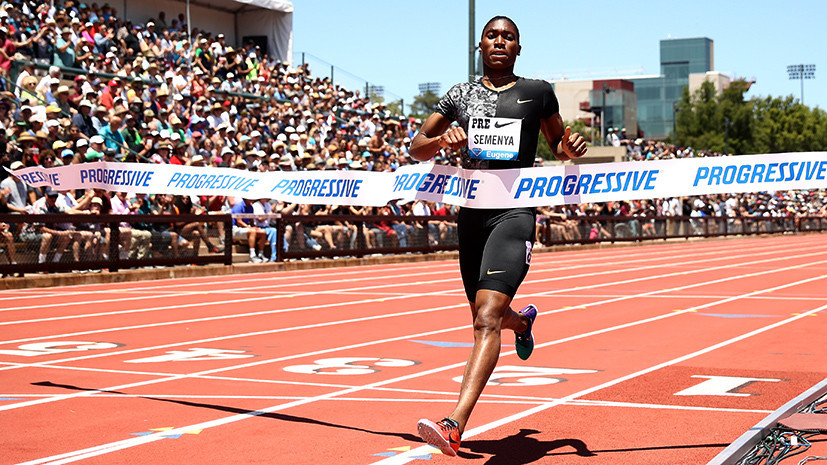 South African runner Custer Semenya continues to protest against the new rules of the International Association of Athletics Federations (IAAF), prohibiting athletes with elevated testosterone to compete on par with other women. The runner threatened to refuse to participate in the World Championships, which will be held in September in the Qatari capital Doha, if she is not allowed to perform at her profile distance of 800 meters.

“If I don’t run in the 800 m race, I won’t run at the tournament at all. My goal is to protect my title. Therefore, if this happens, then so be it. I am not going to take part either in the 1500 m race, nor in any other way. Instead, I’ll just take a vacation and return it in a year, ”the athlete Reuters quotes.

In addition, she stressed that she did not intend to end her career, despite the circumstances. In her plans for the near future - participation in the Summer Olympics in Tokyo, Paris and Los Angeles.

Earlier, Semenya was included in the preliminary composition of the South African national team for the upcoming world championship. At the same time it was reported that the runner could compete in the 3000 m race in the event that the new rule did enter into force.

Despite the fact that at the beginning of May this year, the Court of Arbitration for Sport in Lausanne (CAS) rejected the appeal of the South African against the decision of the IAAF, the athlete has repeatedly stated that she does not intend to take medications that regulate the level of male hormones in the blood.

The South African Athletics Federation (ASA) took the side of the Seed, which filed an appeal with the Federal Supreme Court of Switzerland to repeal an ambiguous rule. This decision was made due to the fact that this instance, among other things, may consider the case from the point of view of human rights violations, as the Seed side points out. In addition, the Ministry of Sport of the country said that in parallel, an application will be submitted to the General Assembly of the United Nations (UN).

In early June, a Swiss court suspended the rule, which enabled the South African to take part in competitions under the auspices of the IAAF. Clarified that we are talking only about her case, but her lawyer noted that this decision will set a positive precedent and in the future will be able to help other athletes who are faced with a similar problem.

Semen admitted that many months of proceedings adversely affect her psychological and physical condition. However, she stressed that she intends to continue to assert her rights, even if for this she will have to refuse to participate in competitions.

“It’s like a legal battle. Like a war. I will not give up. You will defeat me today, and I will defeat you tomorrow. But I do it not only for myself. I am a world champion who has achieved everything I ever wanted. In the end, I do it for those who cannot protect themselves, ”added Semenya.

On the eve of Semenya won her second victory in the official starts after the rejection of the appeal. In the 800m race as part of the Diamond League stage, which is taking place in the USA these days, she won first place, ahead of the American women Edge Wilson and Raevin Rogers, who took second and third places respectively. South African result was 1 minute 55.70 seconds.

Wilson hoped that they could meet again on the same track at the Doha competition.

“I am sure that Semenya will be allowed to compete. In my opinion, no one should be forbidden to compete in tournaments. I find it difficult to judge the attendant circumstances, but I think she should do what she wants, ”says WBC NBC.

The rule that women with a testosterone level above 5 nmol / l should reduce this figure or take part in competitions on an equal basis with men was first adopted in 2018. In the following months, the CAS suspended its action several times due to Seed claims.

The World Medical Association (WMA) stood on the Seed side. Its members demanded that the IAAF abolish the innovation, which, in their opinion, not only violates human rights, but can also cause serious harm to the body of athletes.

Semenya is the current winner of the World Cup 2017 in the 800m race, as well as the two-time Olympic champion in the same discipline.