Putin is waving an amendment to carry out the first nuclear strike, Zelensky renews his country's peace plan, and Western concern over Russia and Iran's cooperation

Russian President Vladimir Putin spoke about the possibility of amending his country's military doctrine in order to allow a preemptive strike to disarm the enemy, while the Ukrainian president said that the peace formula proposed by his country includes 10 points. 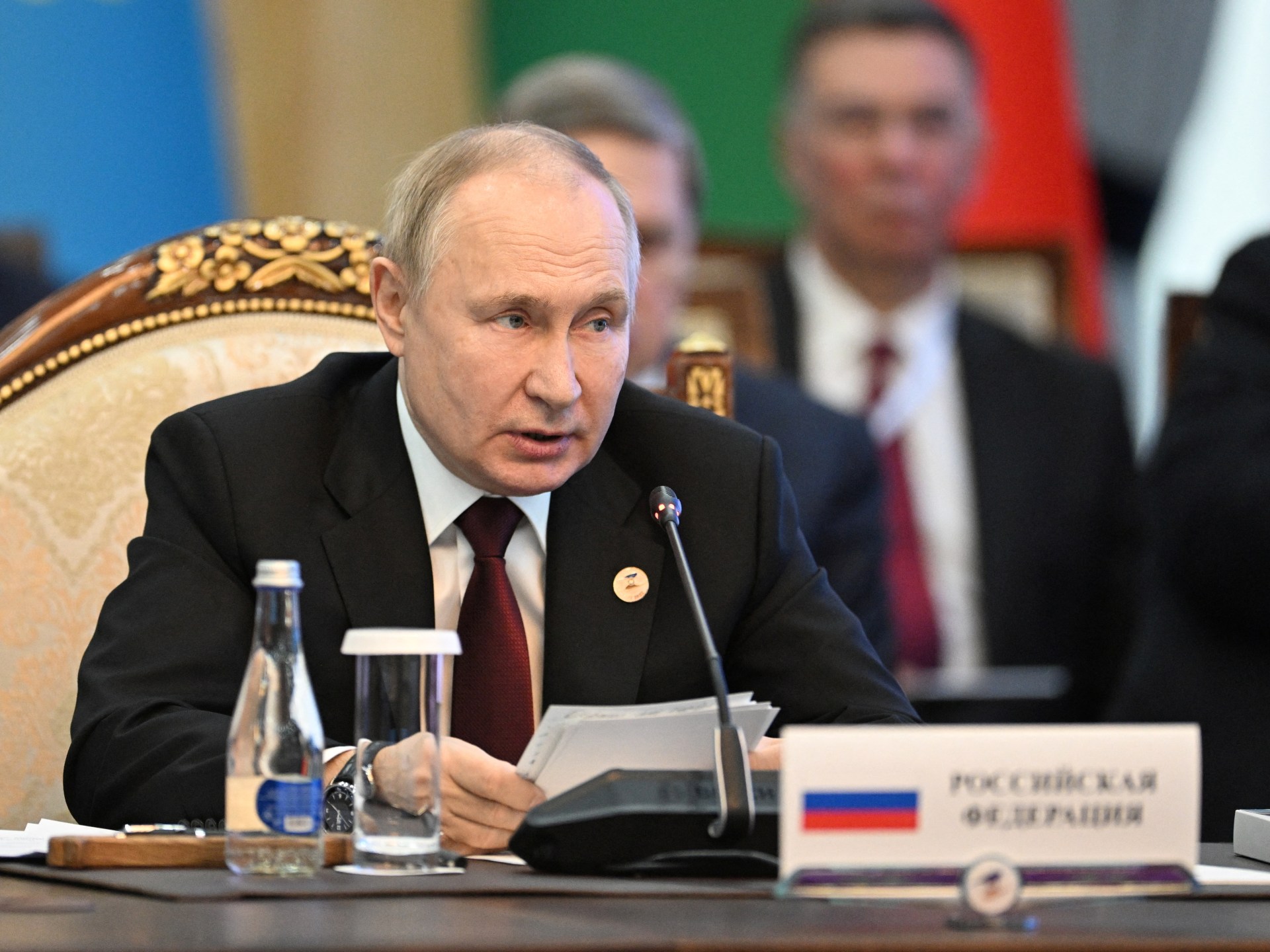 Russian President Vladimir Putin spoke about the possibility of amending his country's military doctrine in order to allow for a preemptive strike to disarm the enemy, while Ukrainian President Volodymyr Zelensky said that the peace formula proposed by his country includes 10 points.

Putin was responding to a question posed by a journalist during a visit to Bishkek, where he was asked to clarify a statement he made earlier this week regarding the use of nuclear weapons.

And he considered that perhaps Moscow should consider adopting "the ideas developed by the Americans to ensure their security," but he said, "We are only thinking about this matter."

The Russian president stressed that his country's hypersonic missiles and systems are "more modern, and even more efficient" than those possessed by the United States.

Putin had hinted the day before yesterday, Wednesday, that Moscow would only use nuclear weapons in response to an attack of this kind, saying, "We consider weapons of mass destruction (nuclear weapons) as a means of defense, (resorting to them) is based on what we call the response in retaliation, if we are hit." We strike in response," but he revealed that "the threat of a nuclear war is increasing" given the confrontation between Russia and the West over Ukraine, blaming the Americans and Europeans for that.

On the other hand, Ukrainian President Volodymyr Zelensky said that the peace formula proposed by his country includes 10 points, while Western concern escalated in the form of Russian-Iranian military cooperation.

Zelinsky said that the situation in major areas of the Donbas front in the east of the country is still very difficult, enumerating the hotspots in Bakhmut, Solidar and Kremina, noting that all residential places in these areas have been damaged by the long-term bombing.

He also added, in a videotaped evening speech, that the Russian forces destroyed the town of Bakhmut, one of the centers of the fighting in recent times, and that they had brought "hell under the Russian flag" to Ukraine, as he put it.

Zelensky said that his country's peace formula includes 10 points, including nuclear security, restoring Ukraine's territorial integrity, energy security, and the return of all prisoners of war and deportees held in Russia.

He added that one of Ukraine's main tasks is to involve the world in a concrete implementation of the points of the peace equation, and stressed the need to ensure that what he described as a terrorist state is held accountable for this war.

On another issue, the United States today, Friday, expressed its concern about the formation of a "full defense partnership" between Russia and Iran, which it described as causing "harm" to Ukraine, Iran's neighbors and the world, as it includes the exchange of weapons and military expertise between the two parties.

Western powers accuse Iran of supplying drones to Russia for its war against Ukraine, where it bombs energy infrastructure to gain advantage in the bloody conflict.

Washington has previously condemned military cooperation between Iran and Russia, but on Friday it spoke of a broad relationship that includes equipment such as drones, helicopters and combat aircraft.

John Kirby, Strategic Communications Coordinator at the National Security Council, said that Washington is considering options for bringing together several countries to discuss Russian-Iranian military cooperation, and that it will use all tools to obstruct this partnership.

He said that there are reports indicating that Moscow and Tehran are considering establishing a joint production line for lethal drones.

Kirby added that the United States will impose sanctions on "3 entities centered in Russia" that are particularly active in "possessing and using Iranian drones."

The United States is also considering "other export control measures" that are supposed to "restrict Iran's access to sensitive technologies," according to the official.

Last November, Tehran acknowledged sending drones to Russia, but stressed that it supplied them before its invasion of Ukraine began.

In the same context, Britain's representative to the United Nations, Barbara Woodward, said that Russia is trying to obtain more weapons from Iran, including hundreds of ballistic missiles.

She added that Moscow provides Tehran with an unprecedented level of military and technical support, as described, expressing concern that Russia intends to provide Iran with more advanced military equipment that would enable it to enhance its capabilities in the field of armaments.

US Secretary of State Anthony Blinken said that the United States imposed sanctions on 65 individuals and entities involved in corruption and human rights violations in 17 countries.

He explained that sanctions were imposed on Russian officials and agents who contributed to the continuation of the illegal and deadly Russian war in Ukraine, as he described it.

He added that sanctions were imposed on the Russian Aerospace Forces, the state's 924 drone center, and the Military Transport Aviation Command.

He also pointed out that Russia's acquisition of Iranian drones violates UN Security Council Resolution 2231 and further fuels the conflict in Ukraine.

On the other hand, Russia's ambassador to the United Nations Vassily Nebenzia told the Security Council that Moscow had already refuted "on many occasions" accusations that Russia receives military supplies from Iran.

"The military-industrial sector in Russia can function well, and does not need anyone's help, while the Ukrainian military industry basically does not exist, and it is supported by Western industry," Nebenzia said.

He stressed that some of the weapons donated to Ukraine appeared on the black market in countries in the Middle East, noting also that there are reports of the transfer of weapons from warehouses in Ukraine to African countries.

In turn, the Chinese delegate to the Security Council expressed his country's concern about the possibility of diverting the flow of weapons destined for Ukraine, noting also that there are reports of armed groups in the Middle East and Africa illegally obtaining weapons flowing to Ukraine.

But the US representative to the Security Council said there was no reliable evidence that the flow of US equipment donated to Ukraine had diverted.

On the other hand, the Elysee confirmed today, Friday, that President Emmanuel Macron's recent statement about granting Russia "security guarantees" was taken out of its "context", ahead of a new conference next Tuesday in Paris on aid to Ukraine.

The French presidency affirmed that "the dialogue between the President of the Republic (Emmanuel Macron) and the President (Ukrainian Volodymyr) Zelensky is excellent," adding, "There is a difference between some movements or some people who seek to cut a section of a sentence out of its context and the reality of the work we are doing, which is being done." Really without difficulty.

And when he spoke with his US counterpart Joe Biden at the beginning of this December about the security structure in Europe and rebuilding it after the end of the war in Ukraine, the French president stressed that it would also be necessary to give "guarantees" to Russia to find a balance with it.

Macron said - referring to Russia's repeated demands 30 years after the fall of the Soviet Union - that "one of the main points is the fear that NATO will come to its doors and deploy weapons that could threaten Russia."

Ukrainian and Eastern European officials have expressed their annoyance and even their opposition to the content of that statement.