“At the expense of the Europeans”: why the EU decided to finance the construction of a new railway in the Baltics

Up to 85% of the costs for the construction of the Rail Baltica railway will be covered from the funds of the European Commission. This was announced by the project coordinator in the highest executive body of the EU Katrin Trautmann. According to her, such a decision was made in Brussels, among other things, because of the military significance of the future artery - it will be used for the transfer of military equipment and military personnel. Recall, Rail Baltica should connect the Baltic States with the rest of Europe. According to experts, due to the lack of economic feasibility, the project experienced problems with financing for a long time. Experts associate the allocation of money with the plans of NATO and the United States to build up their military presence near the borders of the Russian Federation. 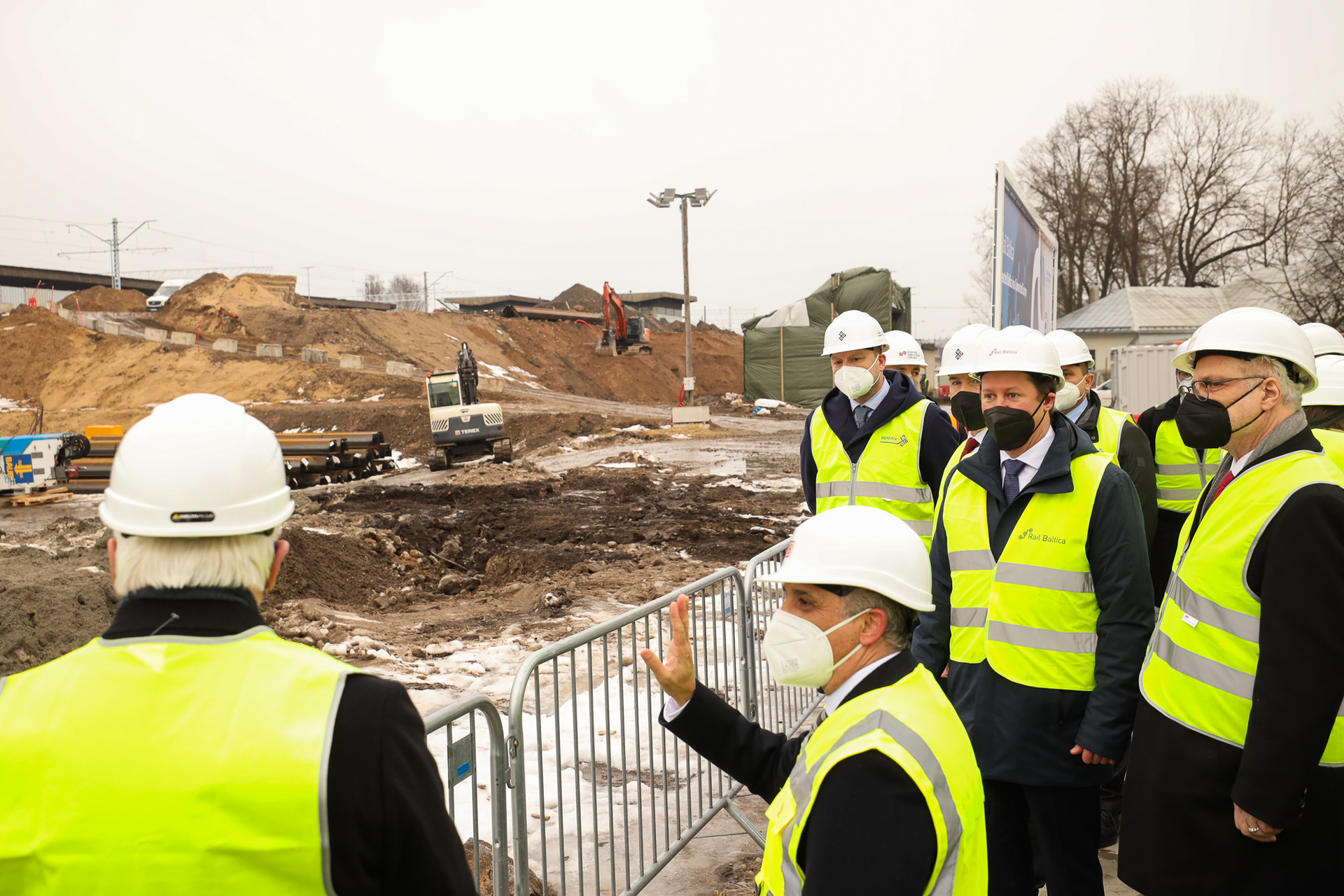 The European Commission has decided to finance up to 85% of the cost of building the Rail Baltica railway.

This statement was made by the project coordinator in the highest executive body of the EU Katrin Trautmann at the Rail Baltica Industry Days conference held in Riga.

“This is important information for future contractors, indicating the significance and financial reliability of the Rail Baltica project,” Trautmann was quoted as saying by the Lithuanian edition of Postsen.

As the official explained, the European Commission decided to allocate funds in connection with the economic and military significance of Rail Baltica.

According to Trautmann, the railway artery will be used to transport military equipment and military personnel.

The coordinator of the Rail Baltica project in the European Commission emphasized that the construction of the road is of great importance in the context of the imminent accession of Sweden and Finland to NATO.

Trautmann also admits that in the future the Rail Baltica branch will be stretched across the territory of Ukraine to the port of Nikolaev.

according to European standard

The coordinator of Rail Baltica in the European Commission, Katrin Trautmann, did not announce the amount that Brussels is ready to allocate.

In September of this year, the Latvian newspaper Diena published expert estimates, according to which, before the aggravation of the situation in Ukraine, the real costs for Rail Baltica amounted to €10-12 billion. Currently, taking into account the economic crisis, inflation and other negative factors, potential costs may exceed €15 billion .

Recall, Rail Baltica should connect the Baltic States with the rest of Europe and solve the problem of the lack of direct passenger traffic between Lithuania, Latvia and Estonia.

The highway is planned to stretch through Vilnius, Kaunas, Riga and Tallinn.

A railway line will be built from Lithuania to Warsaw and Berlin.

The total length of Rail Baltica in the Baltic States will be 870 km.

The idea to build an international highway was born by the authorities of the Baltic states back in the 1990s.

The construction agreement was signed by the transport ministers of these countries in 2001.

However, the practical implementation of ambitious plans was fairly delayed.

Agreements on the establishment of a joint venture (RB Rail) for the development of the project were reached by Lithuania, Latvia and Estonia only at the end of 2011.

In 2015, Rail Baltica participants announced their intention to start construction of the highway in 2018 and complete the work in 2025.

However, the originally announced deadlines were not met.

Then, in 2019, Finland, according to media reports, took a break in the practical implementation of Rail Baltica, saying that it intends first of all to deal with the development of national infrastructure.

The Baltic countries began to implement the project on their own, starting the construction of individual sections.

The deadlines for completing the construction of the railway artery have been repeatedly postponed.

The work is currently expected to be completed in 2027.

In an interview with RT, Sergey Margulis, senior lecturer in the Department of International Politics and Foreign Regional Studies at the Institute of Social Sciences of the RANEPA, noted that Rail Baltica would not be built without EU money.

At the same time, before the special operation in Brussels, they were in no hurry to allocate funds for the implementation of the project, which is unprofitable from an economic point of view.

As the expert explained, the current railway infrastructure of the Baltic states is focused on ensuring the operation of ports and transit, the volume of which has noticeably decreased due to the deterioration of relations with Russia and Belarus.

“Due to a serious reduction in the transit of Russian and Belarusian goods, the Baltic states are having difficulty maintaining the current railway network in a normal technical condition.

Lithuania, Latvia and Estonia have not found a replacement for the transportation of Russian and Belarusian goods.

Therefore, I can’t imagine how they could build, maintain and maintain new railways on their own,” the expert says.

The expert drew attention to the fact that Rail Baltica will be an artery with a European gauge of 1435 mm.

At the same time, since the time of the Russian Empire, the railway network of the Baltic states has consisted of tracks with a width of 1520 mm.

“The new road is being built according to the European standard, as a result, it will turn out that in Latvia, Lithuania and Estonia there will be tracks with two types of gauge at once.

This will naturally complicate operation and lead to a rise in the cost of maintaining railway lines, ”says Margulis.

In a RT commentary, Georgy Vlastopulo, General Director of Optimal Logistics, said that in the current political realities, the Baltic republics had increased chances of obtaining the necessary funding for work on Rail Baltica.

“In the current difficult times, the European Union, it seems to me, may abandon individual infrastructure projects, but in the case of Rail Baltica this will most likely not happen for political reasons,” says Vlastopulo.

Sergey Margulis also believes that the aggravated confrontation between Russia and the West will contribute to the implementation of Rail Baltica.

According to the expert, the European Union will invest money in the construction of a railway line through the Baltics, but will do it to a greater extent for military purposes.

Recall that in April of this year, the European Connecting Europe Facility (CEF) decided to allocate almost €5 million to ensure the so-called military mobility of Rail Baltica sections in Latvia.

In August, the Ministry of Transport of Latvia signed a new funding agreement with the European Climate, Infrastructure and Environment Implementing Agency (CINEA) to finance the Rail Baltica project as part of a call for proposals in the Military Mobility category.

“In the current geopolitical conditions, the strategic importance of the Rail Baltica project is growing.

It is especially important to ensure reliable communication with Western Europe and make full use of the new railway connection with Europe in order to increase the defense capability of our country,” Latvian Minister of Transport Talis Linkaits commented on the agreement with CINEA.

According to Margulis, the Europeans are increasing funding for Rail Baltica in order to make the process of transferring foreign military equipment to the Baltic states faster and more convenient.

“Under the current conditions, the decision to allocate funds for the implementation of Rail Baltica will be of a military-political nature - I can’t find other explanations for investing in a railway that is devoid of economic sense,” Margulis stressed.

A similar point of view is shared by RISS expert Oleg Nemensky.

As the analyst said in an interview with RT, the new phase of the Ukrainian crisis served as an excuse for the West to improve the situation with the speed of the transfer of troops and weapons to the borders of Russia.

“The Rail Baltica project has been discussed for many years, but it is being implemented very poorly.

He was chronically underfunded, but now, despite economic problems, Europe has decided to allocate billions for construction work.

Such actions are motivated by the desire to transfer a large amount of military equipment to the Baltic States as quickly as possible, ”the expert explained.

According to the interlocutor of RT, the Rail Baltica project will be implemented to a greater extent in the interests of Washington.

According to Nemensky, after the aggravation of relations with Russia in 2014, the United States is trying to adapt the transport system of Europe for the operational deployment of its own troops.

“Once again, at the expense of the Europeans, the United States is solving its own problems.

In this case, this is the development of infrastructure to create additional military pressure on Russia.

For Russia, the implementation of Rail Baltica is another challenge, to which, as I think, our country will respond by strengthening groups in the Baltic region,” Nemensky summed up.