United States: the Supreme Court could authorize businesses to discriminate against LGBT customers 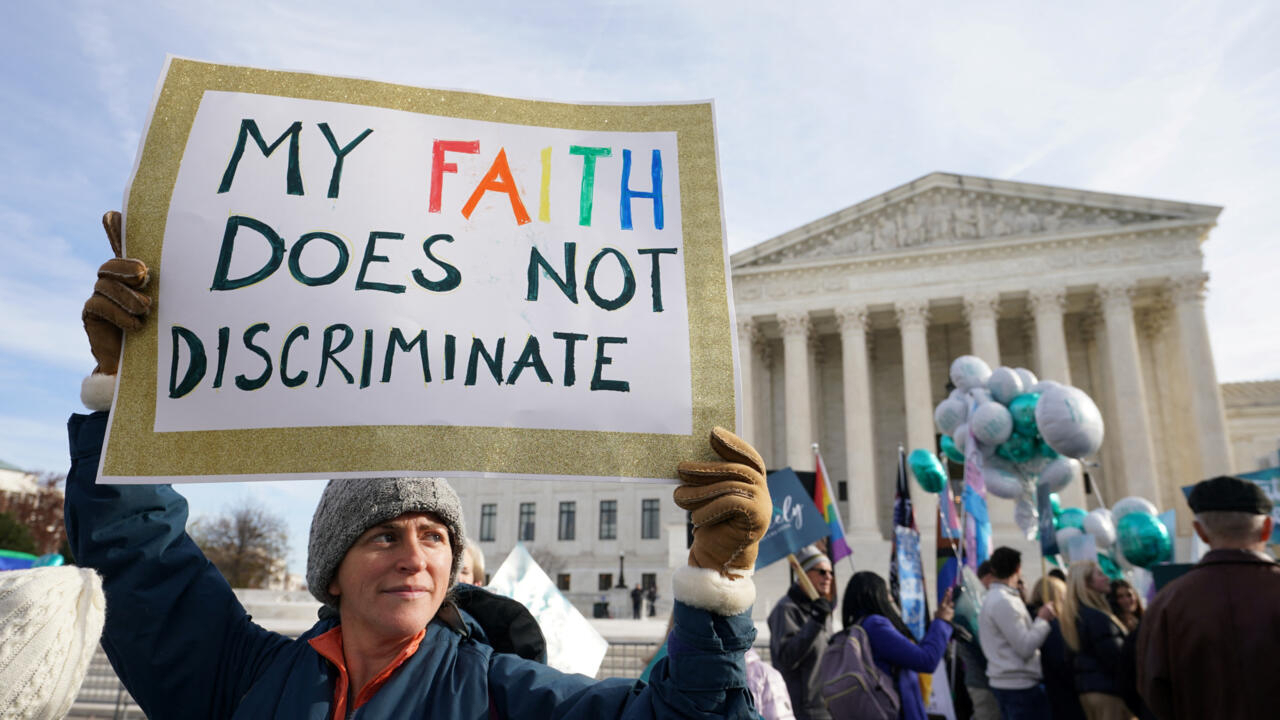 The Supreme Court of the United States seemed to lean Monday, December 5 in favor of a creator of Internet site which refuses to conceive some for homosexual marriages in the name of its freedom of expression and its Christian faith.

“For the first time in its history”, the Court could authorize a company “to refuse to serve a customer on racial, gender or religious criteria”, noted with emotion Judge Sonia Sotomayor.

With her two progressive sisters, the magistrate warned during the hearing against such a judgment, likely according to them to open the door to discrimination of all kinds.

But the six conservative judges of the Court seemed more receptive to the arguments of Lorie Smith, the boss of the company "303 creative" located in Colorado.

"I want to create unique sites to celebrate the beauty of marriage between a man and a woman," she said from the steps of the Court.

But "Colorado is trying to force me to (...) promote ideas contrary to my faith."

This western American state has prohibited merchants since 2008 from discriminating against their customers on the basis of their sexual orientation, under penalty of a fine.

Lorie Smith was not solicited by a gay couple, nor prosecuted by the authorities, but she filed a complaint against the law as a preventive measure.

After losing in an appeals court, she turned to the Supreme Court.

This is not the first time that the high court, which recognized the right to same-sex marriage in 2015, has been called upon to arbitrate between sexual minorities and Christian traders.

In 2018, she agreed with a pastry chef who refused to bake a wedding cake for a gay couple.

But she had based her decision on additional reasons without enacting major principles.

Since then, Donald Trump has consolidated his conservative majority and the Court could issue a judgment with a broader scope by June 30.

The White House called her for restraint.

“There is no reason to change the current balance,” said spokeswoman Karine Jean-Pierre during a press briefing.

The Democratic administration believes that all Americans "have the right to equal access to society, which includes products and services" for sale in the country, she added.

During the hearing, Lorie Smith's lawyer maintained that it was not about homophobic discrimination, but about defending the freedom of expression of an "artist".

But she does not want to be forced to "send a message" contrary to her values.

The law does not relate to the content of the products, but obliges to offer them to all the customers, retorted the lawyer of Colorado, Eric Olson.

For him, Lorie Smith could very well adorn her websites with biblical messages on marriage "between a man and a woman", but cannot refuse to sell them to homosexual couples.

Lorie Smith refuses to produce marriage sites for heterosexuals who are divorced or have committed adultery so "it's the message, not the sexual orientation of the couple that counts", declared the magistrate.

And to ask if a mall photographer, intent on recreating the 1950s vibe, might be allowed to refuse to sit black children on Santa's lap?

"What if someone thinks disabled people shouldn't get married? Where is the line?"

For him, the Court could therefore content itself with answering a limited question: "Are site designers like restorers or publishers?"