Ringing the bells of Mosul: the priesthood of a Norman foundry

Gabriel, Michel and Raphaël will soon ring in Mosul: three bells born in the foundry of Villedieu-les-Poêles (Manche) will fly to Iraq to join the church of the Notre Dame convent... 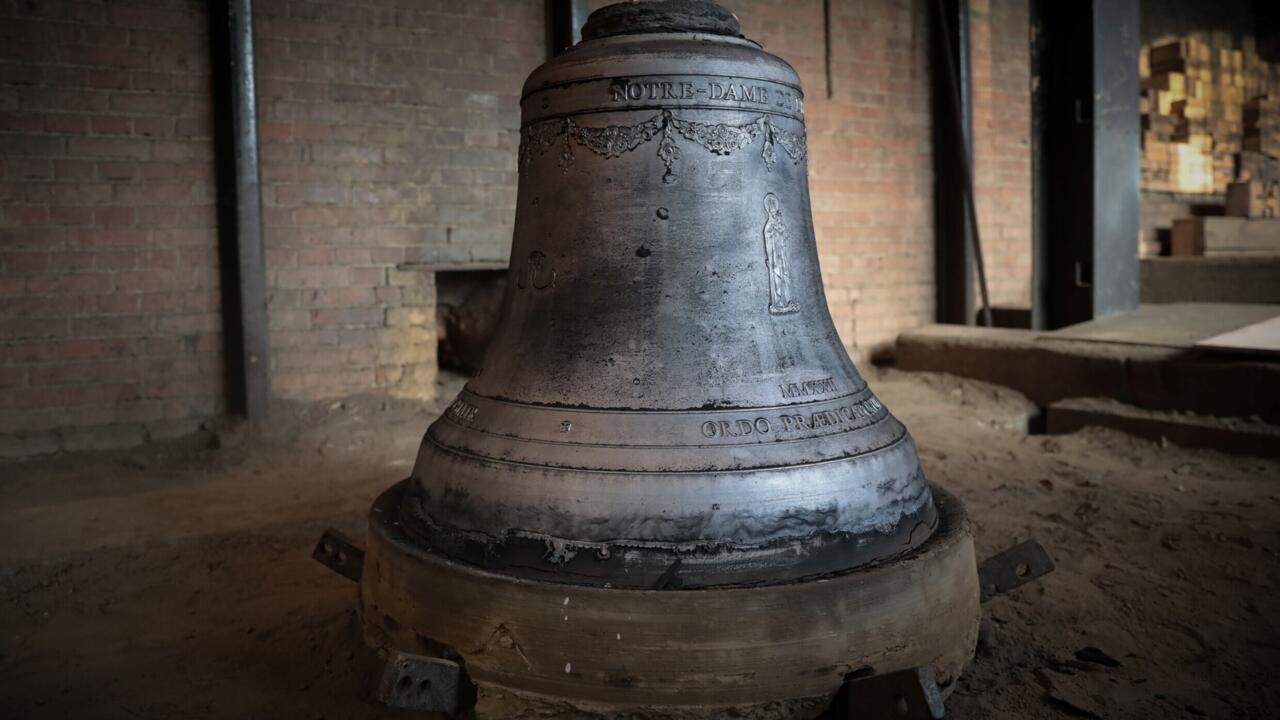 One of the three bells, already cleaned and tuned, rang for the first time on Monday under the beating of the Iraqi ambassador to France, Wadee al-Batti, accompanied by the director general of UNESCO Audrey Azoulay and the Dominican Provincial Nicolas Tixier.

The delegation had made the trip to attend the "déchapage" (removal of the exterior mold Ed), and give the first brush stroke to the two other bells still under mold before the transport of the three instruments by plane to the second city of Iraq , in the far north.

"As a Christian from the city of Mosul, I have many memories of this bell tower, throughout my childhood, during my studies, it punctuated my life," said Mr. al-Batti, also an ambassador to UNESCO. since Sunday.

UNESCO Director-General Audrey Azoulay gives a brushstroke to one of the bells intended for the Notre-Dame-de-l'Heure convent in Mosul, on December 5, 2022 at the Cornille Havard foundry, in Villedieu-les- Stoves © Lou BENOIST / AFP

Ringing bells again in Mosul is for him "a victory of life: that of being united together against terrorism and violence".

First school for girls in Iraq, first school for teachers, the convent of Notre-Dame de L'Heure (al Saa-a in Arabic) was built by Dominican brothers in the middle of the 19th century on the plans of an architect French.

The campanile of his church (bells and clocks) had been paid for from Empress Eugénie's personal funds.

This symbol had been destroyed in 2017 by the men of Daesh before being driven out of the city by the Iraqi army.

UNESCO is overseeing the reconstruction of the old city of Mosul after its destruction during the fighting against the Islamic State, a project costing more than 100 million euros.

The Director General of UNESCO Audrey Azoulay saw in this project "support for Mosulian society in its diversity, cultural, religious, knowledge, university, library, it is a question of rebuilding this spirit, and not only stones".

"Speaking to All Denominations"

Brother Nicolas, dressed in a single white tunic despite the thermometer close to zero in the Cornille Havard foundry, felt that "these bells bring hope, and not just for the Christian community", before evoking a memory: "I went to Mosul recently and a Muslim policeman asked me when the bells were going to come back."

These three bronze bells, which weigh from 110 to 270 kg (fa, mi, sol) were cast in November in a characteristic alloy composed of 78% copper and 22% tin.

Dominican Father Nicolas Tixier attends the inauguration of the bells intended for the Notre-Dame-de-L'Heure convent in Mosul, on December 5, 2022 at the Cornille Havard foundry in Villedieu-Les-Poeles, in Manche © Lou BENOIST / AFP

Installation and maintenance will be carried out in Iraq by a team of locals trained on site by Paul Bergamo, director and owner of the foundry.

"Going to Mosul was overwhelming, it's a project that will mark me for a while," said the man who wanted to be a "knowledge smuggler" in this adventure.

His workshop employs 15 full-time craftsmen and exports 25% of its production, among others to Vietnam, Ireland or even Benin: 100 church bells per year, for 200 to 300 house bells.

There are only two bell foundries left in France (the other is in Savoy), and about thirty in the world.

A craftsman from the Cornille Havard foundry near one of the bells intended for the Notre-Dame-de-l'Heure convent in Mosul, on December 5, 2022 in Villedieu-les-Poêles, in the Manche department © Lou BENOIST / AFP

The installation of the bells, named after the three archangels, Gabriel, Michael and Raphael to "speak to all faiths", according to Mr. Bergamo, is scheduled before March 6, 2023.

The complete completion of the convent's reconstruction work is scheduled for December 2023 at the latest.