Yesterday, the international coalition led by Washington resumed its usual patrols in the areas controlled by the Kurdish fighters in northern Syria, after they were reduced, following the Turkish air strikes on the area. 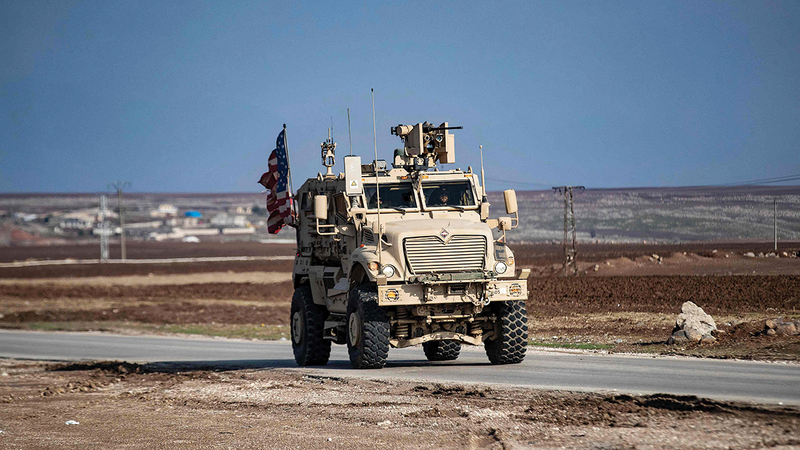 Russia: We are ready to hold a meeting between Assad and Erdogan

A patrol of US forces near Rmeilan countryside in Al-Hasakah Governorate, northeastern Syria, near the Turkish border.

Yesterday, the international coalition led by Washington resumed its usual patrols in the areas controlled by the Kurdish fighters in northern Syria, after reducing them, following the Turkish air strikes on the area.

An AFP correspondent said that two patrols of the International Coalition against ISIS set off yesterday morning, in two different directions, from Rmeilan base in the northeast, accompanied by fighters from the Syrian Democratic Forces.

Each patrol included four armored vehicles that raised American flags, accompanied by a military vehicle of the Syrian Democratic Forces, one of which toured villages adjacent to the Turkish border near the border city of Al-Malikiyah, while the second headed east towards the Iraqi border.

The International Coalition had reduced its patrols following the Turkish strikes that targeted, starting from November 20, the areas controlled by the Syrian Democratic Forces, led by the Kurdish fighters, and due to Ankara's threats to launch an imminent ground attack in the region.

A Kurdish military source, speaking on condition of anonymity, told AFP, "The international coalition, in coordination with the Syrian Democratic Forces, has resumed its usual patrols in northeastern Syria, after reducing them following the Turkish strikes on the area."

He added, "A new weekly program has been established to resume work normally," noting that "patrols have decreased from 20 patrols per week to about five or six, after the Turkish strikes."

In Moscow, the Russian President's Special Representative to the Middle East and African countries, Russian Deputy Foreign Minister Mikhail Bogdanov, said yesterday that Moscow does not impose mediation on Ankara and Damascus, stressing that if requested, Moscow is ready to hold a meeting between Turkish President Recep Tayyip Erdogan and his Syrian counterpart, Bashar al-Assad.