The San Francisco City Council is considering the possibility of using robots for police duties. Officials are considering a proposal that would allow San Francisco police to use robots as lethal force against suspects. A new California law took effect this year, which requires M 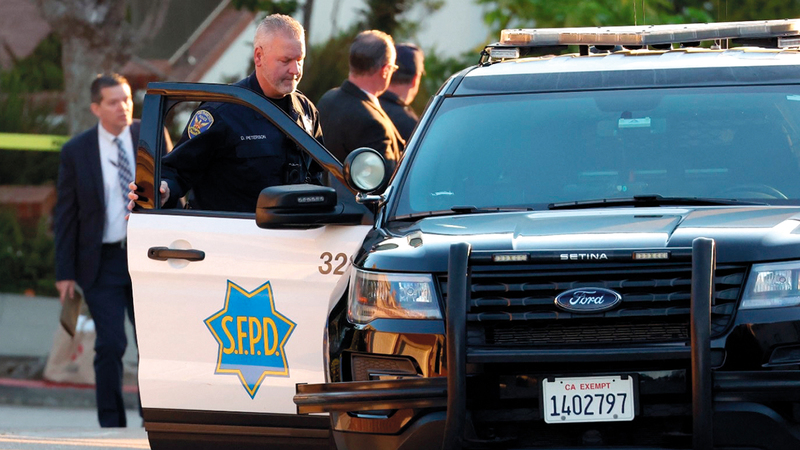 The idea is causing widespread controversy...and the city council is studying the benefits and risks

The San Francisco City Council is considering the possibility of using robots for police duties.

Officials are considering a proposal that would allow San Francisco police to use robots as lethal force against suspects.

A new California law took effect this year that requires every municipality in the state to designate authorized uses for all military equipment in their local law enforcement agencies.

The amended proposal states that "robots will only be used as a lethal option when the risk of loss of life to members of the public or to officers is imminent and outweighs any other option of force available."

The San Francisco Police Department currently has 12 working robots, and they are remotely controlled and are usually used to gain situational awareness, scan certain areas that officers may not be able to reach, investigate and defuse potential bombs, or assist in hostage negotiations.

Much of the military equipment that has been sold to cities for use by police departments is issued by the federal government, Peskin says, but there is not a lot of regulation on how to use the robots. We are doing our best to reach the goal.”

The idea of ​​allowing robots to kill at times has generated a lot of controversy.

And in October, a number of robotics companies, including Hyundai subsidiary Boston Dynamics, signed an open letter saying that general-purpose robots should not be weaponised.

University of Washington law and information science professor Ryan Callow, who studies robotics, says he has long worried about the increasing militarization of police forces, but police units across the country may be drawn to using robots because “it allows officers to control a dangerous person without exposing themselves.” to harm.”

Callow points out that bots could also keep suspects safe.

When officers use lethal force, at their own discretion, the justification is often because the officer feels insecure and perceives a threat, but Callow notes, "You're sending bots into a situation, and there's no reason to use lethal force, because no one is actually there." Exposed".

The first time a robot was reported to be used by law enforcement as a lethal force was in the United States in 2016, when the Dallas Police Department used a bomb disposal robot, armed to kill a suspect, who shot and killed five police officers.

"City Police do not own or operate robots equipped with lethal force, and the department has no plans to equip robots with any type of firearm," San Francisco Police Public Information Officer Allison Maxey wrote in an emailed statement.

Although the robots could be equipped with explosive charges to breach certain structures, they would only be used in extreme circumstances.

"No security strategy can anticipate every conceivable situation or any exceptional circumstance that officers may encounter, and security units must be prepared and have the ability to respond proportionately," the statement continued.

Paul Scharre, author of The Army Without Autonomous Weapons and the Future of War and helped establish the US policy on autonomous weapons used in war, notes that there is an important difference between how robots are used in the military and in law enforcement missions.

For example, the robots used by law enforcement are not autonomous, which means they are still under human control.

"For the army, robots are used in combat against an enemy, and the purpose of that is to kill the enemy, and this is not and should not be the goal of the police forces," says Schar. "They are there to protect citizens, and there may be situations in which they need to use lethal force. But it should be a last resort.

The US expert added that what is worrying about the San Francisco police proposal is that it does not seem well thought out. "Once you authorize this type of use, it can be very difficult to undo it."

He says the proposal makes a false choice between using a robot for lethal force, or endangering law enforcement officers.

Instead, Schar suggests, robots could be dispatched with a non-lethal weapon to neutralize the target, without endangering the officers.

As someone who studies robotics, Ryan Callow says the idea of ​​"killer robots" is a starting point for a larger discussion about our relationship to technology and artificial intelligence.

And when it comes to having robots in the field, Calo thinks about what happens if the technology fails, and a robot accidentally kills or injures a person.

In this, he says, "it becomes very difficult to determine who is responsible."

"Are they the people who use the technology?" Calo asks.

Are they the people who design the technology?

When dealing with people, there are social and cultural dynamics of the situation, which is something you can't do with a robot.

“They are seen as entities to us as opposed to other technologies, and so when you have a bot in these situations, all of a sudden you not only have this question of who is in charge — humans, but you also have This strong feeling that the robot is involved.”

And even if robots can be used to keep humans safe, Calo poses another question. “We have to ask ourselves, do we want to be in a society where the police are killing people with robots?

It feels very dehumanized and militaristic.”

The San Francisco Board of Supervisors is meeting soon to discuss how robots can be used by local police.

Robots continue to transform our world, and law enforcement is no exception to their impact.

For example, in 2019, police in Novato, California, relied on a robot to handle an explosive situation.

After the perpetrator doused the floor of a gas station with petrol in response to a payment problem, he tried, in vain, to set the place on fire before driving off in his truck to a nearby store.

Once he arrived, he asked for a pack of cigarettes and matches.

To deal with the situation, a robot was sent, which was linked to a mobile phone for negotiation purposes.

Eventually, the perpetrator was arrested and charged with attempted arson and vandalism.

This is just one of the many stories of police bots that have grown exponentially over the past several years.

From running speeding tickets and patrolling the streets to dealing with armed and bomb suspects, robots are becoming an effective crime-fighting tool that can save workers and lives.

Some say that in addition to supporting the workforce, by taking on risky missions, robots could keep officers safe and prevent policing bias.

"If an officer walks into a room, and there's an armed adversary, they'll have no choice but to shoot," said former CEO of Endover Robotics Sean Pellatt. "By adding the time and distance between the robot operator, you've introduced an element that can reduce of losses.”

And in 2013, a police robot helped catch the Boston Marathon bombers.

Within years, after a man killed five Dallas police officers and threatened to shoot more in a parking garage, the police decided to avoid more victims, and sent a robot to deal with a shipment of explosives, killing the suspect.

Some fear that bots may do more harm than good.

Even the NYPD canceled its use, in 2021, after it received backlash from the community and government officials.

• 12 robots working with the San Francisco Police Department, and they are controlled "remotely".

• Bots are used to investigate and defuse potential bombs, or assist in hostage negotiations.