His Highness Sheikh Saud bin Saqr Al Qasimi, Member of the Supreme Council and Ruler of Ras Al Khaimah, witnessed the "Martyr's Day" ceremony, which took place yesterday, in the Wahat Al Karama in Abu Dhabi, to commemorate and fulfill the memory of the nation's righteous martyrs in various fields. The ceremony was also attended by His Highness Sheikh Mohammed bin Saud. Bin Saqr Al Qasimi, and L 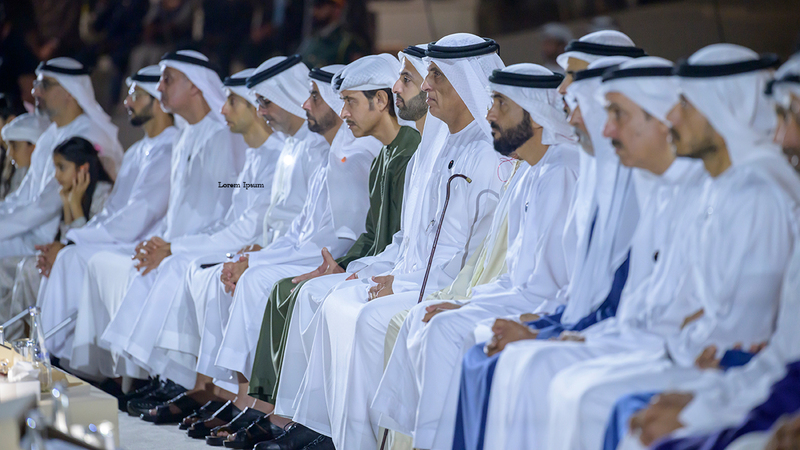 His Highness Sheikh Saud bin Saqr Al Qasimi, Member of the Supreme Council and Ruler of Ras Al Khaimah, witnessed the "Martyr's Day" ceremony, which took place yesterday, in the Wahat Al Karama in Abu Dhabi, to commemorate and fulfill the memory of the nation's righteous martyrs in various fields.

The "Martyr's Day" ceremony began with the arrival of His Highness Sheikh Saud bin Saqr Al Qasimi to the Wahat Al Karama, then His Highness went to the Martyr's Monument and laid a wreath on it, while the artillery fired 21 rounds, a tribute to the souls of the martyrs, and their sacrifices for the sake of the homeland and their heroism. In the fields of glory and dignity.

This initiative comes as a tribute to the sacrifices of the martyrs who sacrificed their lives for the safety and security of the UAE, so that its flag would remain flying, and in appreciation of the patriotic stances shown by their families, during which the most wonderful stories of loyalty to the homeland were written.

After that, His Highness Sheikh Saud bin Saqr Al Qasimi went to the main podium, where the national anthem of the United Arab Emirates was played.

The Head of the Executive Department of Military Health, Brigadier General Staff Doctor Aisha Sultan Muhammad Al Dhaheri, delivered a speech on "Martyr's Day", in which she said: "Despite the passage of years, our righteous martyrs have never been absent from our memory..but we thought that they are alive with their Lord, enjoying joy in the gardens of bliss, from the very beginning. A martyr in defense of the land of the Emirates, on the 30th of November 1971, passing through the martyrs of dignity in defending the fever of sister countries, and confronting the forces of evil and extremism, along with the martyrs of humanitarian work.. One feature unites these righteous martyrs, is that they gave their lives for a higher and higher goal And the most precious thing is to defend the UAE and uphold its values ​​and principles.

Al-Dhaheri added, "I was there...among them, and they were racing with all courage and daring, driven by love of the homeland, loyalty, and belonging to it...to win victory or martyrdom, along with their brothers, to defend the right and duty, and with the grace of God Almighty, they won victory, and some of them were martyred." Yes, I remember their determination and persistence, and those kind faces, and the determination that does not soften and does not deviate from facing challenges .. adversity shows the metal of men .. the metal of the sons of Zayed.

She pointed out that Martyr's Day - and that for many countries it means martyrs of military operations only - but it goes beyond that in the UAE, as the ambassadors of humanitarian work sacrificed their lives to deliver aid to the less fortunate in our world, and to whom the UAE is keen to extend a helping hand to them wherever they are, especially in most dangerous conflict areas.

Al-Dhaheri affirmed that «the pride of the UAE and its prevention is a goal for which it is worth sacrificing everything precious and precious, even if the price is martyrdom. He endowed his children and residents on his land with security and prosperity of life, aided the less fortunate, and hastened to support the oppressed.

And she said, "The righteous martyrs preceded us to the honor of sacrificing the soul for the lofty message of the UAE.. But we remain in the covenant, we do not deviate and we do not slacken in pursuing the blessed march of the distinction of the United Arab Emirates, under the leadership of His Highness Sheikh Mohammed bin Zayed Al Nahyan, President of the State, May God protect him, and his brothers, the rulers of the Emirates.

In conclusion, she turned to the families of the martyrs. ».

During the event, immortal words were presented by the late Sheikh Khalifa bin Zayed Al Nahyan, may God have mercy on him, who was keen to participate in many military missions, and the stations that constituted milestones in the history of the UAE, and in Arab brotherhood and cooperation relations .. He also directly supervised the tasks Our armed forces in a number of fields of honor and dignity.

Then, seven lights were lit in memory of our heroes who were martyred while performing their national duties this year. Air Force and Air Defense planes also flew over the sky of the oasis. The United States stands tall.

At the end of the event, a squadron of Air Force planes flew over the sky of the Oasis of Dignity, in a symbolic formation, saluting the souls of the righteous martyrs, and the symbols they represent of sacrifice and redemption, sincerity of belonging, and reverence for their heroism in the fields of dignity.