China: Clashes break out between police and protesters in Guangzhou

New demonstrations against the restrictive measures linked to Covid-19, interspersed with clashes with the police, took place on Tuesday in Guangzhou, in the south of China. The city is the epicenter… 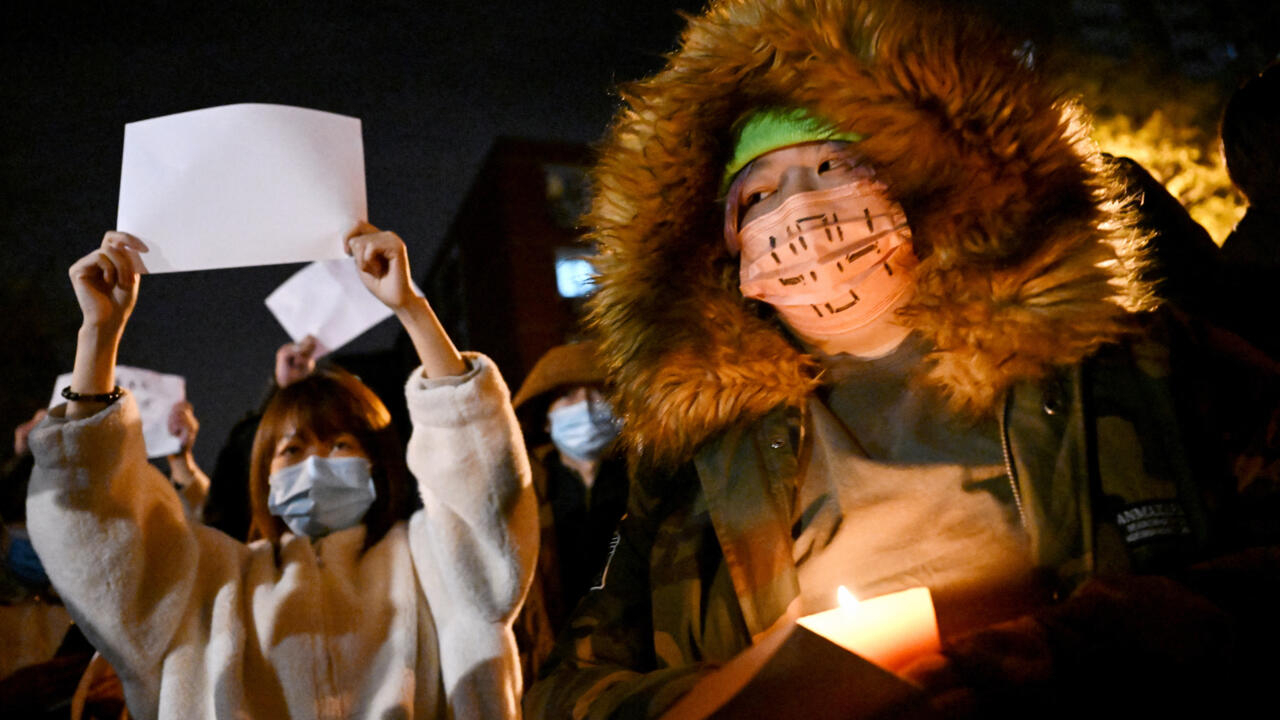 Clashes erupted overnight from Tuesday to Wednesday between protesters and police in Guangzhou, southern China, according to witnesses and videos on social media, after several days of uprisings in the country against health restrictions.

>> In China, zero tolerance of protesters for "zero Covid"

Footage shows police dressed in white full bodysuits and equipped with transparent riot shields, marching in serried ranks down a street in Haizhu district, as glass objects are thrown around them.

On the videos, geolocated by AFP, cries are heard while orange and blue barricades are knocked down on the ground.

People are also seen throwing objects at the police then, on another extract, a dozen individuals, their hands tied, seem to be arrested by the police.

A Guangzhou resident, who only gave his last name - Chen - told AFP that he saw around 100 police officers converge on the village of Houjiao, which is part of the Haizhu district, and stop at the minus three men Tuesday night.

@Reuters was able to establish that the videos were indeed filmed in the Haizhu district.

First demonstrations at the beginning of November

The important Chinese security system reacted quickly to put an end to the historic demonstrations which took place this weekend in several cities of the country.

The anger had erupted after nearly three years of anti-Covid restrictions, which in China involve repeated confinements and almost daily PCR tests of the population.

The trigger for this mobilization, on an unprecedented scale since the pro-democracy demonstrations of 1989, was the fire in a residential building in Urumqi, capital of the Xinjiang region (north-west), which caused 10 deaths.

Internet users have accused the health restrictions in the city of having prevented the rapid arrival of help, an argument swept away by the authorities.

Guangzhou's Haizhu district, home to more than 1.8 million people, is the epicenter of a new outbreak of Covid-19 cases and has been under lockdown since late October.

Earlier in November, protesters in this neighborhood had already expressed their anger, toppling containment barriers and marching through the streets.

Videos of the protest, shared on social media on November 14 and verified by AFP, showed hundreds of people on the streets of Haizhu, some tearing down the plastic tapes surrounding the homes of those placed in quarantine.

According to videos posted Tuesday evening on the social network Weibo, a kind of Chinese Twitter, long lines of cars were visible as residents rushed to leave the neighboring district, Tianhe.

On Tuesday, Zhang Yi, a spokeswoman for the Canton Health Commission, said "the epidemic in Tianhe District is progressing rapidly and the risk of transmission among the population continues to increase."

A student who was ordered out of his college dorm gave his testimonial on Weibo: "I thought it would be the best time of my life... But now I get an urgent notice at 1 a.m., I'm shaking and I cry in the hallway at 2 a.m., I see my friends running away with their suitcases at 3 a.m. At 4 a.m., I sit alone on my suitcase, in tears, waiting for my parents to come.

"At 5 a.m. I finally get in the car and escape this place that devours people. I used to say this land is welcoming, now it's like hell," he said. - he added speaking under the pseudonym Ludao Lizi.