[Bunker Buster] 'Little Li Solju' and Hwaseong-17 type cheers... Kim Jong-un, do you have a corner to believe in?

hello. This is Ayoung Kim from the SBS Unification Diplomacy Team. This is the fifth order of 'Bunk Buster', which unravels the core of diplomacy, defense, and unification news as if it were a precision strike. 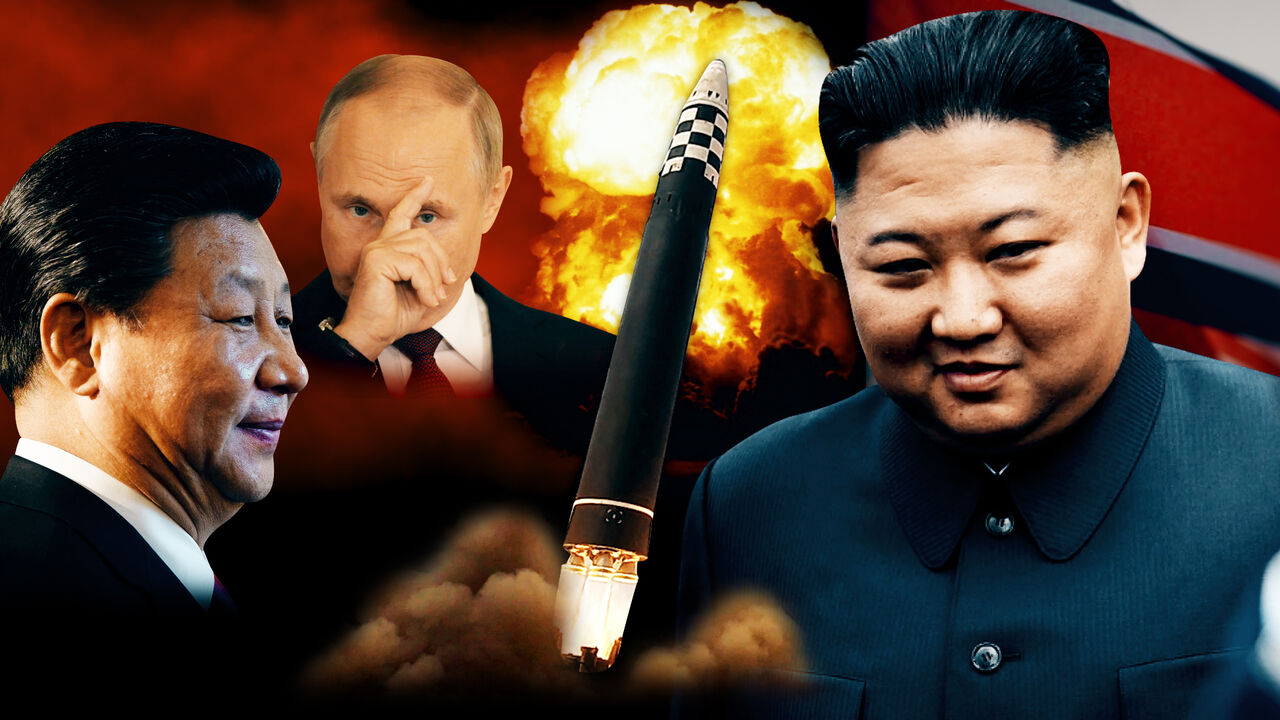 This is Ayoung Kim from the SBS Unification Diplomacy Team.

This is the fifth order of 'Bunk Buster', which unravels the core of diplomacy, defense, and unification news as if it were a precision strike.

The diplomatic battle in November, in which the breathless summit diplomacy raged, has come to an end.

What about the report card?

South Korea, the US, and Japan raised voices of pressure against North Korea.

The U.S. and China insisted not to cross the line, but stood firm on the Taiwan issue.

China, Korea, and Japan still showed a difference in perspective even after meeting for the first time in three years.

It is an evaluation that there was no winner in the midst of each complicated calculation method.

But there were people who laughed.

someone who has watched this international diplomatic war very interestingly, perhaps satisfactorily .

The moment you write hacks, 'The End'...

This is the Pentagon, a place called the heart of US security.

South Korea and the US Defense Ministers met at the Pentagon while the ROK and US Air Force forces frequently sortied and trained on the Korean Peninsula and continued North Korean provocations in response.

After the Korea-US Security Council SCM, a 'red card' for Pyongyang came out.

By specifying the exact name of the person to receive the warning letter.

If nuclear weapons are used, the Kim Jong-un regime will come to an end...

The ROK-US Security Council has been held 54 times so far, and

the expression 'the end of the Kim Jong-un regime' has never been so straightforward in a joint statement.

The two ministers also made an unusual public appearance touring the US strategic bombers B-52 and B-1B.

It even showed the means to retaliate immediately if North Korea uses nuclear weapons.

The first nuclear posture review report, NPR, which was announced in the Biden administration, also contained expressions that North Korea would hate extremely.

[Walter Slocomb/Former Undersecretary of Defense Policy (1st, Source: Atlantic Council): 'If you use nuclear weapons, we will destroy the regime, not the country (North Korea)'.

I think that's a good message.]

What was North Korea's response to the warning from the United States against the Kim Jong-un regime?

[Chosun Central TV (19th): US imperialism that dares to erode our sacred dignity and sovereignty indiscriminately...

It was to shoot the Hwasong-17, a monster ICBM that could hit the US mainland.

While accompanying her daughter 'Juae' to the launch site.

The Hwasong-17 is in the shape of multiple warheads that can carry not one warhead, but several.

Previously, the launch failed while losing face, but this time it is evaluated as a success.

The flight time alone was 4,135 seconds, and it was said that it was over an hour, but it is similar to the level identified by our military.

Rather than shrinking toward the United States, which sent the highest level of warning, it was a bolder provocation.

Aside from Kim Jong-un, North Korea's number one military leader, Park Jeong-cheon, threw a horse bomb prior to the launch.

The warning of the end of the US regime is a 'hush (hutton) absurdity', and now the Korean Peninsula is not a place where the US bluff works as before.

Does this mean that we are no longer afraid of the US nuclear umbrella that is being sent to the Korean Peninsula?

Did you overcome your anxiety?

It is presumed that the North Korean regime was very conscious of the disastrous end of the dictatorship that had collapsed earlier.

You can read the traces of Kim Jong-un's recent remarks at a glance.

the clichéd sermons, sophistry, sanctions, pressure, and military threats of the US imperialists.

are familiar with the events of

Looking back at the end of the two dictators.

Iraq was accused of developing weapons of mass destruction, attacked overwhelmingly by the United States, and Saddam Hussein was hanged after losing the war.

Libya's Muammar Gaddafi, surprised by the US attack on Iraq while under economic sanctions, fell first.

He chose to give up nuclear development to maintain the regime.

But he met a more miserable end than Hussein.

In 2011, a democratic revolution swept across the Middle East, and Gaddafi died while begging for his life from the militia.

It was just two months before Kim Jong-un ascended to power at the end of 2011.

It is a part that can guess what Kim Jong-un's anxiety must have been after watching this.

, it seems that it has now escaped from such anxiety.

what do you believe in

It is evaluated that Kim Jong-un shows such confidence because he has a corner to believe.

First of all, it is because they believe that they are a strategic country with nuclear weapons.

Like India and Pakistan, which are de facto nuclear powers, they have already conducted six nuclear tests, and it is unclear whether they have completed the technology to re-enter the atmosphere, but it is also true that they have successfully launched ICBMs several times.

However, there is one more decisive background that is no less than this.

the dynamics between Biden and Xi Jinping, Biden and Putin

At the G20 summit, President Biden and President Xi Jinping met for the first time.

Some evaluations weighed on the fact that it was a 'first step rather than a decisive battle' between the two countries, but the awkward relationship was exposed.

An American reporter who asked President Xi Jinping a question about human rights was even dragged out of the conference room.

The atmosphere was not different when it came to the North Korean issue.

President Biden pressed for a responsible role in China, but President Xi Jinping rather defended that North Korea's concerns should be addressed.

Chinese data released after the summit did not even mention the North Korean nuclear issue, which is satisfactory for North Korea.

Here, the relationship between Putin and Biden is the worst before Ukraine.

In North Korea, there are two reliable insurance policies.

North Korea's move to recognize the autonomous republics of Donetsk and Luhansk, the Russian-occupied territories in eastern Ukraine, as independent republics before anyone else was also a move conscious of Russia.

So, is it better to provoke?

, it is a matter of concern that this international situation is unlikely to end in a short period of time.

North Korea also believes that the conflict structure between the US and China and the US and Russia will continue for the time being.

[Choi Yong-hwan/Senior Research Fellow, Institute for National Security Strategy: If you ask what Kim Jong-un said in his political speech last year, he defines it as 'the current international situation is a new Cold War'.

And in this year's policy speech, he talks about the transition from a US-centered unipolar system to a multipolar system.

And it seems that they judged that it was much more advantageous for their survival.

It is analyzed that they do not simply endure, but believe that the more they provoke, the more advantageous the environment is created.

: What Kim Jong-un said in his political speech this year

is that the tense international situation presents a very good opportunity for them to strengthen their military power, so I will take advantage of this opportunity. say it will.

In fact, during this year's ROK-US joint training, North Korea's reaction was very different from the past.

[Choi Yong-hwan/Senior Research Fellow, Institute for National Security Strategy: In the past, North Korea was very quiet during the ROK-US joint training.

Even if there had been criticisms before and other provocations after it was over, they did not launch missiles or actively conduct military exercises during joint training (it has changed.)]

North Korea, even though the US nuclear carrier is in Busan, is They carried out armed demonstrations regardless of the constant sorties of fighter jets.

Recently, the pattern of provocations against us has also changed.

In June, a map showing Pohang and the southern east coast was laid out and the military operation plan was revised, and after that, tactical nuclear unit training was released.

A ballistic missile was fired into the open sea south of the NLL, and an air raid warning was sounded on Ulleungdo.

It is an atmosphere where North Korea's confidence toward South Korea and the United States is growing.

Apart from objective history, the fact that North Korea believes so is a problem that cannot be overlooked in itself.

In a situation where responses at the UN level are failing each time, it is a natural result that Korea and the US and Korea and US and Japan are closer together.

However, some point out that this should not be the entirety of diplomacy regarding North Korea.

On the day North Korea shot down the Hwasong-17, the three countries of Korea, the US, and Japan, as well as New Zealand, Canada, and Australia, who were attending the APEC summit in Thailand, hastily gathered together.

The government evaluated that it showed its will to respond to the North Korean nuclear issue by issuing a strong message of condemnation in just four hours.

However, at the press conference on this day, questions about President Xi Jinping came up without fail.

We have to admit that it is China and Russia that can issue the most effective warning to North Korea.

In particular, in a situation where North Korea is using the US-China-Russia international conflict as its weapon, it is necessary to solve higher-order equations not only for Korea-US-Japan, but also for Korea-China and Korea-Russia relations.

'China and Russia will not be able to continue acquiescing to North Korea...

If the international community cannot send even this minimal signal to North Korea, tensions from North Korea may have no brakes for the time being.