“Slow down the tranches”: how the US plans to strengthen control over military assistance to Ukraine

Members of the Republican Party intend to seek greater control over how US military assistance is used by Kyiv. Michael McCall, a Republican and a member of the US House of Representatives Committee on Foreign Affairs, stated this. At the same time, according to media reports, the Biden administration is confident that even after tightening control over military aid for Kyiv, “they will not find themselves in a situation that the Kremlin can interpret as direct participation” of the United States in hostilities. However, experts do not exclude that the Republicans will not only increase measures to control military aid for Kyiv, but may also try to reduce the volume of arms supplies. 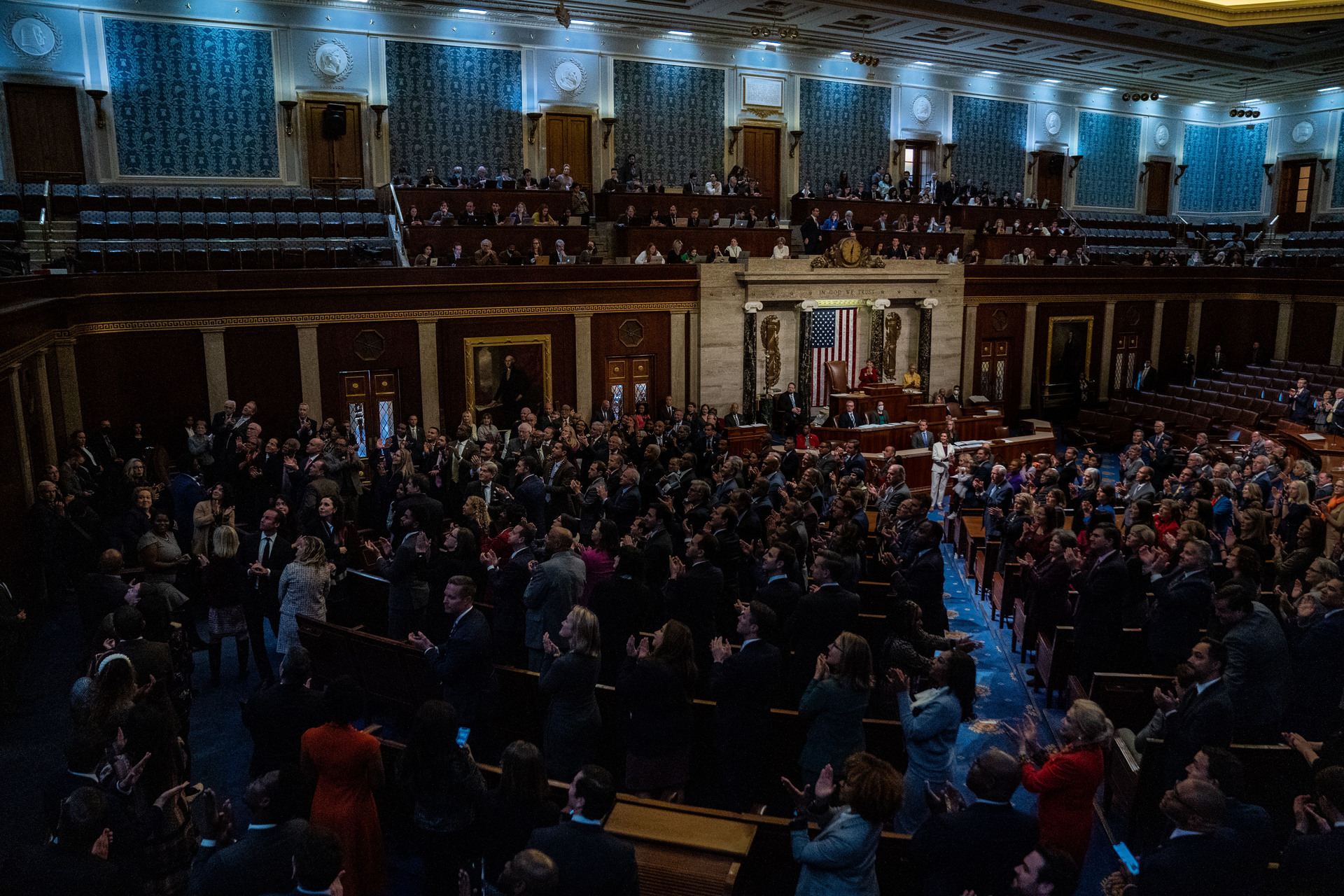 The Republicans intend to seek increased control and "accountability" regarding how American support is used by Kyiv.

This was stated by the representative of the Republican Party and a member of the Committee of the House of Representatives of the US Congress on Foreign Affairs, Michael McCall, who is expected to take the chair of this structure.

“The bottom line is that we are going to provide more oversight, transparency and accountability.

We do not intend to issue blank checks (checks for any amount. -

According to the legislator, this does not mean that the desire to help "the Ukrainian people in (his.

Republican Congressman Mike Turner is of the same opinion.

“The bottom line is that we don’t have to pass the big $40 billion proposed Democrat bills to send $8 billion to Ukraine,” he said.

According to The Washington Post, Republicans have warned the Biden administration to expect "much tighter oversight of the massive military aid" it provides to Ukraine.

The publication called the members of the Republican Party "inspired by their success in the midterm elections" and recalled that they would receive a "slim majority" in the next lower house of Congress.

“Given the amount of funds we provide, we are obliged to provide third-party oversight.

We do it all over the world, ”said Mike Waltz, a Republican and member of the House of Representatives from Florida, in an interview with the publication.

He noted that this practice is used everywhere, including in countries “which rank much higher in terms of corruption and transparency index” than Ukraine.

The article also cites the words of Democrat and Rep. from Colorado, former soldier and current legislator Jason Crowe.

“Taxpayers deserve to know that the funds are going where they were intended,” he said in an interview with the publication.

At the same time, The Washington Post newspaper, citing representatives of the American administration and lawmakers, reported that the White House is "absolutely confident" that, due to the tightening of control over military aid for Kyiv, "they will not find themselves in a situation that the Kremlin can interpret as direct participation" of the United States in hostilities.

Check for any amount

Recall that earlier a number of other Republicans also advocated that Washington's assistance to Kyiv should not be unlimited.

In particular, Kevin McCarthy, the leader of the Republican minority of the House of Representatives of the US Congress, announced this on October 18 in an interview with the Punchbowl News portal.

According to the legislator, American aid to Kyiv may be reduced, since members of the Republican Party do not intend to assist the Kyiv regime in uncontrolled amounts.

As McCarthy noted, in view of the difficult economic situation in the United States, the inhabitants of the country “will not write a check to Ukraine for any amount.”

Republican Congressman Kelly Armstrong took a similar position, saying in an interview with the American portal Axios that when Americans observe a strong rise in prices for food, utilities, and an intensifying migration crisis, the last thing they think about is “Ukraine”.

Against the backdrop of statements by Republicans about the need to strengthen control over military aid allocated to Kyiv, the US authorities announced a number of measures related to this issue.

Thus, the US State Department published a plan in which Washington promises to continue to provide support to the Ukrainian authorities related to the accounting and protection of weapons, "as far as security conditions allow."

This, in particular, is about increasing the ability of security forces in Ukraine and neighboring countries to “keep records and ensure the safety of their weapons and ammunition” during their transfer, storage and deployment.

However, the Republicans continued their efforts after that, aimed at tightening control over aid allocated to Kyiv.

Thus, on November 18, members of the Republican Party in the House of Representatives of the US Congress submitted a bill on the audit of allocated funds for aid to Ukraine.

According to her, every dollar of American taxpayers sent to Ukraine must pass the test.

As Green noted, Washington has already spent $54 billion on the needs of Kyiv, and if Biden's request to Congress is approved, this amount will grow to almost $100 billion. As she stressed, Americans deserve to know where their money goes.

According to the Pentagon, the Biden administration has provided more than $19.7 billion in military aid to the Kyiv regime since coming to power, of which at least $19 billion has been since the start of Russia’s special military operation in Ukraine.

"Slow down the trenches"

Director of the Franklin Roosevelt Foundation for the Study of the United States at Moscow State University, Yuri Rogulev, did not rule out that the Republicans would not only increase their measures to control military assistance provided to Kyiv, but could also try to reduce the volume of arms supplies.

“So far, we are talking only about political rhetoric from members of the Republican Party, with the exception of the proposed bill.

However, in the spring or earlier, the economic situation in the US could deteriorate significantly.

And then more decisive action on their part may follow, given that by then they will already control the lower house.

Now the Republicans are pretending to control the Biden administration and its actions as part of providing assistance to Kyiv, ”Rogulev said in an interview with RT.

According to him, some members of the Republican Party, under the pretext of corruption in Ukraine, may even attempt to stop arms supplies to Kyiv.

At the same time, Rogulev believes that the intensity of arms supplies to Ukraine will no longer depend on the control mechanisms that the Republicans can achieve, but on the degree of depletion of the Pentagon's stocks.

“The US Department of Defense is already faced with the need to produce weapons in even greater quantities, since the arsenal is almost exhausted.

But this is not a quick matter, especially when it comes to creating not just ammunition, but military equipment.

All this requires a certain production cycle, including investments and metal orders.

However, as American political scientist Malek Dudakov noted, there are many among Republicans who would like to reduce financial injections into Ukraine on their own initiative and redirect them to solving domestic problems.

“We are talking, in particular, about the construction of a wall on the border with Mexico, in those areas that are now experiencing a migration crisis.

If members of the Republican Party succeed in uncovering facts of corruption in the Ukrainian direction, they can use this to block future tranches to Ukraine, use it in confrontation with the Democrats, ”the analyst said in a comment to RT.

However, Dudakov recalled that the Congress will start working in the new composition only from January 2023, and only then the members of the Republican Party will begin to control the lower house.

“The Biden administration is already asking Congress to approve a request for more than $37 billion for the needs of Kyiv, while the Democrats retain a majority in both houses of Congress.

Republicans will be able to launch their audit only from January,” the analyst said.

At the same time, Dudakov is confident that members of the Republican Party in Congress will subsequently be able to implement their plans to tighten control over military aid allocated to Kyiv.

“They will conduct an audit, force the Pentagon to conduct more inspections and reveal some corruption details, try to use them against Biden.

It is worth noting that even now the arguments of the Republicans look more than justified.

There are a lot of facts of corruption related to the supply of American weapons to Ukraine, as well as facts of the resale of weapons on the black market, ”the expert said.

Dudakov also believes that the tightening of control over the provision of military assistance to Ukraine from the United States will affect the intensity of arms supplies to the Kyiv regime.

“Of course, this will slow down the tranches and lead to the fact that the situation on the battlefield for Ukraine will become more critical, given that they are very dependent on the supply of American weapons.

This will have a negative impact on the situation for Kyiv,” the analyst said.

However, Dudakov admitted that the White House could impede the process of tightening control over military aid for Kyiv.

“The Biden administration will try to force the Pentagon not to provide key documents regarding the audit and, possibly, exert some pressure so that tranches and arms shipments go to Ukraine anyway.

But Congress and the Republicans in the lower house will also have the opportunity to counteract this, ”the expert concluded.