Thirteen arrested in Spain of the cocaine 'supercartel' directed from Dubai

The Civil Guard has dismantled the European cocaine supercartel in an operation coordinated by Europol that has resulted in 49 detainees in several countries, thirteen in... 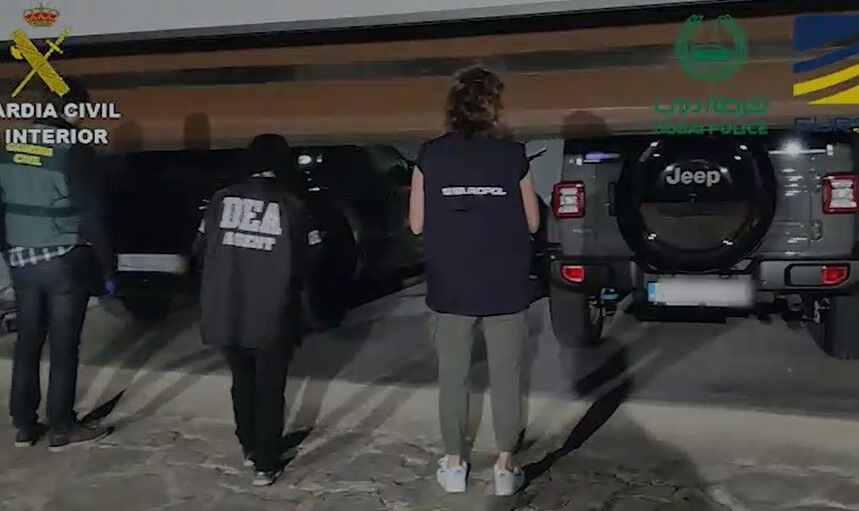 The Civil Guard has dismantled the European cocaine supercartel in an operation coordinated by Europol that has resulted in 49 detainees in several countries, thirteen in Spain, and among them the drug lords who from Dubai directed drug trafficking operations between South America and Europe.

Agents have seized more than 30 tons of cocaine in various European ports and it is estimated that this large organization was behind a third of the total market for this drug in Europe.

In Dubai, six members of the organization known as "drug lords", who had been based in this emirate for years, have been arrested.

In Spain, under the name of Operation Faukas, thirteen people have been arrested, nine of them Spanish, and more than twenty searches have been carried out at homes and companies in the provinces of Malaga, Madrid and Barcelona.

To the six detainees in Dubai must be added the thirteen in Spain and another thirty in France, Belgium and the Netherlands.

The organization had established its base in these countries coinciding with the location of the most important European ports considered the main gateway for drugs into Europe.

As reported by the Civil Guard, a historic milestone has been reached in the fight against global drug trafficking and an unprecedented event with the action carried out in Dubai, where the six "drug lords" of the detained cartel were taking refuge, and from where They directed the different cells with the conviction of being in a sanctuary where they felt untouchable and leading a high standard of living.

The operation took place between the 8th and the 19th and in Spain it was carried out by the Central Antidrogas Group of the Central Operative Unit (UCO) of the Civil Guard, which carried out simultaneous actions in Malaga, Madrid and Barcelona.

The Faukas operation began with the seizure of a container in the port of Valencia in March 2020 in which the organization intended to introduce 698 kilos of cocaine.

This event gave rise to a broad exchange of information with numerous police agencies from other countries, which borne fruit when those responsible for the introduction of the container from Panama were identified.

It was verified that a network had been established in Spain that introduced containers with cocaine inside through the ports of Barcelona, ​​Valencia and Algeciras (Cádiz) and that it had formed a complex corporate network of real estate investments in the area of ​​the Costa del Sol to launder the benefits obtained from drug trafficking.

The agents identified the leader of this network, a British citizen linked to the Costa del Sol who had to leave Spain when they tried to kidnap him and who moved to Dubai, from where he continued to direct criminal activities and maintained contacts and drug trafficking businesses with the rest. of "drug lords" based in the emirate.

They also identified the supplier of the drug, a Panamanian citizen also based in Dubai, allegedly responsible for the introduction of cocaine into the port of Manzanillo in Panama and who also maintained contact with the rest of the drug lords in the emirate.

The network had two structures in Spain, one in charge of extracting drugs from commercial seaports and another for money laundering through companies.

The first was located in the provinces of Barcelona and Malaga with a direct influence on the Barcelona port and was made up of two Bulgarian citizens and three Spanish people, one of them a worker at the port facility, responsible for the entry and exit of vehicles.

The other structure was made up of people highly trusted by the leader of the network and was located on the Costa del Sol, from where they acquired assets, real estate and business shares worth 24 million euros to launder drug money.

In the records, more than half a million euros in cash, three handguns and luxury vehicles were found, some with prices close to 300,000 euros.