Thousands of people have taken to the streets this Saturday in various Andalusian cities to denounce the "collapse" of the coronavirus crisis. who suffers primary care and to ask the Government... 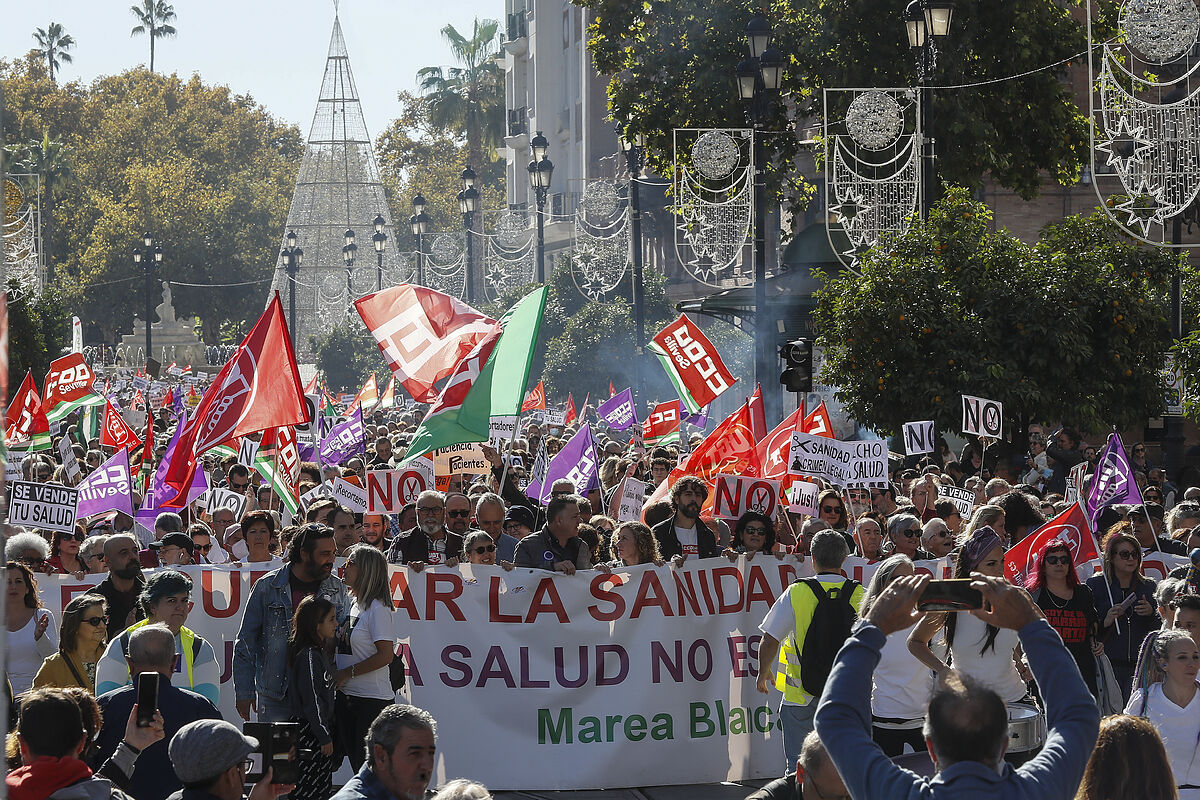 and to ask the Andalusian government, chaired by the

not to privatize public health

In the midst of a festive atmosphere, the demonstrators have displayed banners against the "cuts" and in defense of "public, universal and free" healthcare.

The most massive demonstration has been that of Seville, which has been attended by some

, according to the organizers of the protest (the Andalusian Coordinator of

), although the Police have reduced the number of attendees to 4,000.

In any case, the marches in defense of public health in Andalusian cities have been

than the one held in Madrid a couple of weeks ago.

Then, some 200,000 protesters, according to the calculation of the Government Delegation, gathered in the center of the Madrid capital to criticize the health management of the Executive chaired by Isabel Díaz Ayuso.

, recently deceased, during the period of the socialist Susana Díaz as president of the Junta de Andalucía two legislatures ago .

This Saturday demonstrations have been held in Seville, Cádiz,

The march of the Seville capital has started from the San Telmo Palace, seat of the Presidency of the Junta de Andalucía, to Las Setas, supported by

, unions and social and neighborhood movements under the motto "In defense of our public healthcare".

The White Tide of Huelva, for its part, joins the march in the Andalusian capital, in which representatives of the 'Basta ya Málaga' Association will also participate.

In Granada, some 1,000 people, according to the conveners, have participated in a concentration in the central Fuente de las Batallas.

In the capital of Cádiz, the protest took place in the Plaza de San Juan de Dios, while in Algeciras it was at the Punta Europa Hospital, organized by the Regional Coordinator in defense of public health.

, a retired family doctor and spokesman for the White Tide of Seville, has expressed his satisfaction with the support for the protest and has encouraged the protesters to fight for their rights and for public health because "it is important that society civilian stand in front".

He has stressed that in Andalusia there are about 2.5 million

23 buses from towns in the Sierra Sur have attended the protest in Seville, as reported by Martín Recio.

There were banners from

At the edge of two in the afternoon, the concentration has ended with the reading of the manifestos and the Andalusian anthem.

"continues to collapse", since there is an average delay of 10 days to get a face-to-face appointment with the family doctor.

In addition, the conveners of the demonstrations affirm that more than one in ten Andalusians are on one of the

for consultation, diagnostic tests and surgery.

"Mental health is still overwhelmed and care in nursing homes remains without a solution," they warn.

For the White Tides, the Andalusian Government this year has extra European resources in its budget and, instead of using them to replenish staff and reinforce public health, it will allocate them, in part, to

to the private sector.

As EL MUNDO has been reporting, the Board's budgets for next year contemplate a spectacular increase in patient referrals to concerted clinics.

For all this year, the Andalusian Government plans to care for 195,745 patients in subsidized

in subsidized hospitals has also increased, since the 82,214 planned for the whole of this year has risen to the 127,782 fixed in the Junta's budgets for 2023. Therefore, in one year this index rises by 55 %.

The conveners of the protest in defense of health demand the stabilization of the 12,000

, since their work is not reduced to being reinforcements to deal with coronavirus cases.

The Coordinator also requests that professionals be "adequately" paid so that there is not "not one professional trained in Andalusia who emigrates for lack of a necessary and decent job offer."