Thousands of police and civil guards have joined this Saturday in a massive demonstration in the center of Madrid, in which they have accused the government of... 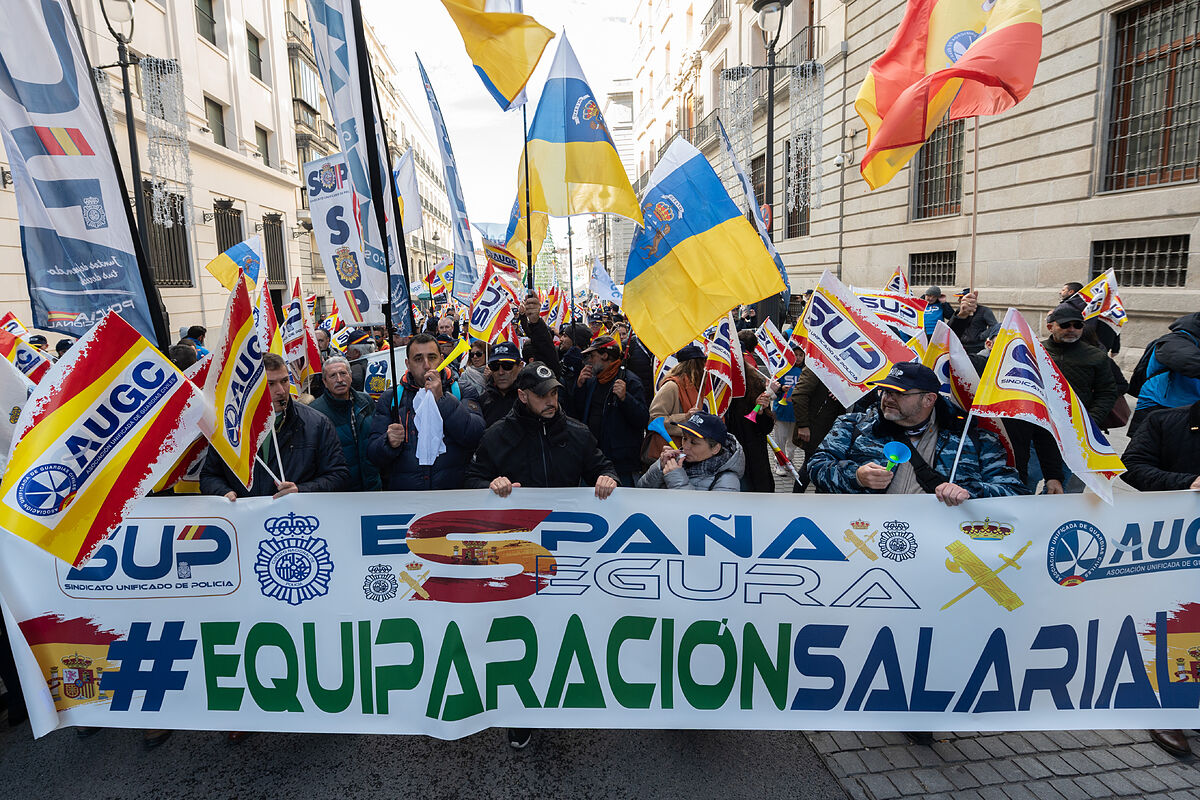 , in which they have accused the government of "discriminating against them" by not sitting down to negotiate their main demands: early retirement with guarantees, working hours of 35 hours and the reclassification to group B civil servant.

In the march between the Puerta del Sol and the Plaza de las Cortes, the

(AUGC) have brought together some 6,000 attendees, according to the Government Delegation in Madrid, the majority agents accompanied by their relatives and arrivals from different parts of the national territory.

It has also been possible to see representatives of the Popular Party, Vox and Ciudadanos at the head of the demonstration, the parties that have shown their "support" for the demands of the organizers, who will continue to "pressure" the Government, to which they ask for a " negotiating table" in which to discuss their demands.

During the march and the subsequent speeches on a stage set up in front of the Congress of Deputies, police and civil guards have shouted "Marlaska, resign", "First police, second class conditions" or "Madrid, listen, our fight begins".

Behind the banner that led the march, the general secretary of the SUP, Mónica Gracia, highlighted to questions from journalists that it is "bleeding" that earlier this year early retirement was granted to the Mossos d'Esquadra and the

For his part, the general secretary of the AUGC,

, has stressed that the celebration of this demonstration stems from the "abandonment" they perceive on the part of the Government, which has not given them any response to the repeated requests to meet at a table of negotiation.

In addition, both organizers have recalled the "breach" of the 2018 agreement for salary equalization with respect to other regional and local police forces, for which they have filed a complaint in court.

, since the signing of the aforementioned agreement, the salary of members of the State security forces has increased by 26%, and is expected to rise to 38% in 2024.

Along the flow of demonstrators, the flags of numerous autonomous communities were waving, including those of the

, whose trade unionists have been represented at the concentration in the capital.

"We have left by bus from Santiago de Compostela at 02:30 a.m. For us it is an important day, demanding and festive," the general secretary of the SUP in Galicia,

After this massive demonstration, the SUP and AUGC intend to meet with the rest of the unions and associations of the Councils of the National Police and the Civil Guard to mark a "road map" with the aim of putting pressure on the Government so that, at least, meet their demands and sit down to negotiate.