Principals of private schools reported that some parents of students dictate their conditions and directives to school administrations, and interfere in their terms of reference by forming groups on the social networking site “WhatsApp” and presenting demands related to their children collectively, trying to impose them on the administration, or influence a decision. 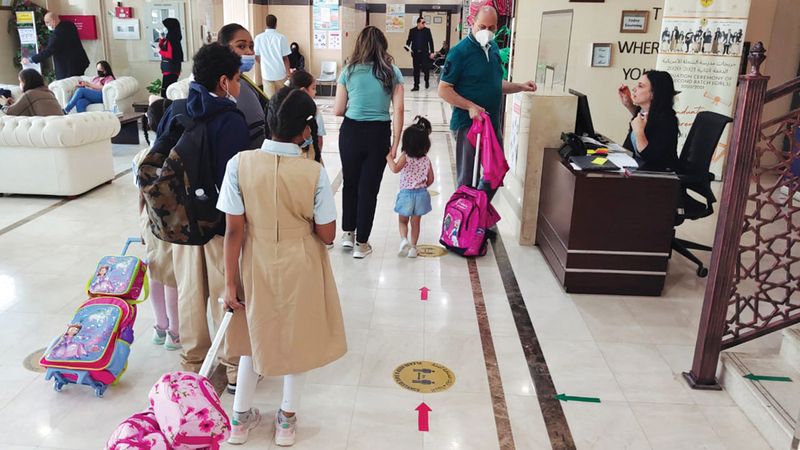 School principals: They try to influence the choice of class, teacher, and holidays

School principals: Interventions that do not serve the interest of students lead to negative results.

Principals of private schools reported that some parents of students dictate their conditions and directives to the school administrations, and interfere in their competences by forming groups on the social networking site “WhatsApp”, and presenting demands related to their children collectively, trying to impose them on the administration, or influence its decisions.

They told «Emirates Today» that the interventions include choosing specific names from the teachers or approving vacations that permeate the school year, or where the student sits in the classroom, and others, pointing out that «the school administrations seek to involve the students' families in the educational process as part of the success of the system, But within the limits of what is permitted and without giving up its original competences.

In detail, a member of the board of directors of the Victoria Private School in Sharjah, Amin Al-Nizami, said that some of the students' families seek to "manage schools."

He explained that «during the period when the lessons were explained (online), some mothers objected to the level of the teacher and asked to change it, and there were those who demanded that his son be with his friends in the same class, while we as an administration aim to create diversity to help students expand their friend base. ».

He added, "Some parents ask to put cameras inside school buses so that they can follow the details of their children's trips to and from school, while some use WhatsApp groups to provoke students' families' protests against the school administration," stressing that "the administration deals with this matter by making sure to sit." With the students’ families, explaining the matter to them, and explaining the reasons that prompted you to take a decision and not others, with the aim of strengthening the part related to communication between the administration and the students’ families and their involvement in the educational process.

The owner and director of Al Shula Private Schools in Sharjah and Ajman, Ibrahim Baraka, said that the school administration is receiving attempts to interfere in its competencies from students’ families, the most prominent of which is determining school hours and vacation days, and they demand that the school give holidays on certain days (such as rain), as is the case with others, as well as Attempting to interfere with the level of ease or difficulty of exams.

He continued, "The demands raised by the students' families have a mechanism to deal with. The administration is the one that decides the start date, the distribution of students, the selection of classes, and the placement of each student in the most suitable place for him according to its vision."

The director of Al-Kamal Helwan Private School in Sharjah, Youssef Fares, said, "The criterion for responding to or rejecting parents' requests is the extent to which the request affects negatively or positively the school's academic level, and that it does not oppose regulations, laws, and regulations." Among them, for example, is the request of specific teachers to teach their children, especially those who taught them during the previous years, and determining the method of evaluating their children and distributing grades.

He added: «There is no doubt that communication and cooperation between the school and the parents of the students is required, and is evidence of success, and it is possible to respond to them in some matters, which has already been done. And reduce it by half an hour.

He emphasized that «the principle of the school depends on listening to the proposals and not rejecting them from the ground up and putting them up for discussion.

In turn, the Director of the National Charity School in Ajman, Dr. Maher Hattab, said that one of the criteria for success in managing the school is its ability to involve students’ families in the educational process, and encourage their contributions and participation in its axes that serve their students, such as participating in setting school policies, plans, enrichment curricula and procedures Security and safety, providing periodic assessments about the quality of work in the school, and following up on the promises made by its administration through its annual development plan. About work procedures in the school and its results, and how to deal and communicate with students and their families.

He said, "The participation of students' families and their involvement in the school atmosphere must proceed in an effective and positive atmosphere to ensure the achievement of better results, and the school administration must be clear from the beginning in the areas in which it needs their support, and provide their participation, opinions and recommendations, and the school administration must explain to them The tasks and powers that belong to the administration and school staff and are unique to them by virtue of their sole responsibility for the results.

He continued, "Interventions that do not serve the interest of students, and take away from the powers of others or deprive them of their right to make a decision, are considered unacceptable because they are unproductive and lead to negative results." And follow up the quality of the performance of its employees, supervise the evaluation of its staff and students, and develop its curricula.

He stressed the importance of consultation and cooperation with the students' families and the local community in order to complete the picture and achieve the interests of the students.

"Some of the students' families seek to run the school by objecting to the level of the teacher and requesting a change."

"Responding to or refusing parents' requests is due to its negative or positive impact on the academic level of the school."

"Involvement of students' parents in the educational process is one of the most important criteria for success in school management."

“The interventions of the students’ families include where the children sit, and the choice of their classmates.”

"School administrations involve the students' families in the educational process as part of the success of the system."