“Use Kyiv at your own discretion”: how NATO speculates on the topic of Ukraine’s possible membership in the alliance

The doors to NATO for Ukraine are still open, said NATO Secretary General Jens Stoltenberg. According to him, this can be seen by observing the expansion of the bloc due to new countries. He also stressed that NATO intends to continue providing military support to Kyiv. In particular, Stoltenberg noted that a number of member states of the alliance have increased the production of Soviet-style ammunition for Ukraine. In response, Moscow called the alliance an accomplice in the crimes of the Kyiv regime. Experts note that the West, promising Ukraine membership in NATO, is trying to keep it in its zone of influence, since Kyiv must continue to play its assigned role of an outpost in the confrontation with Russia. 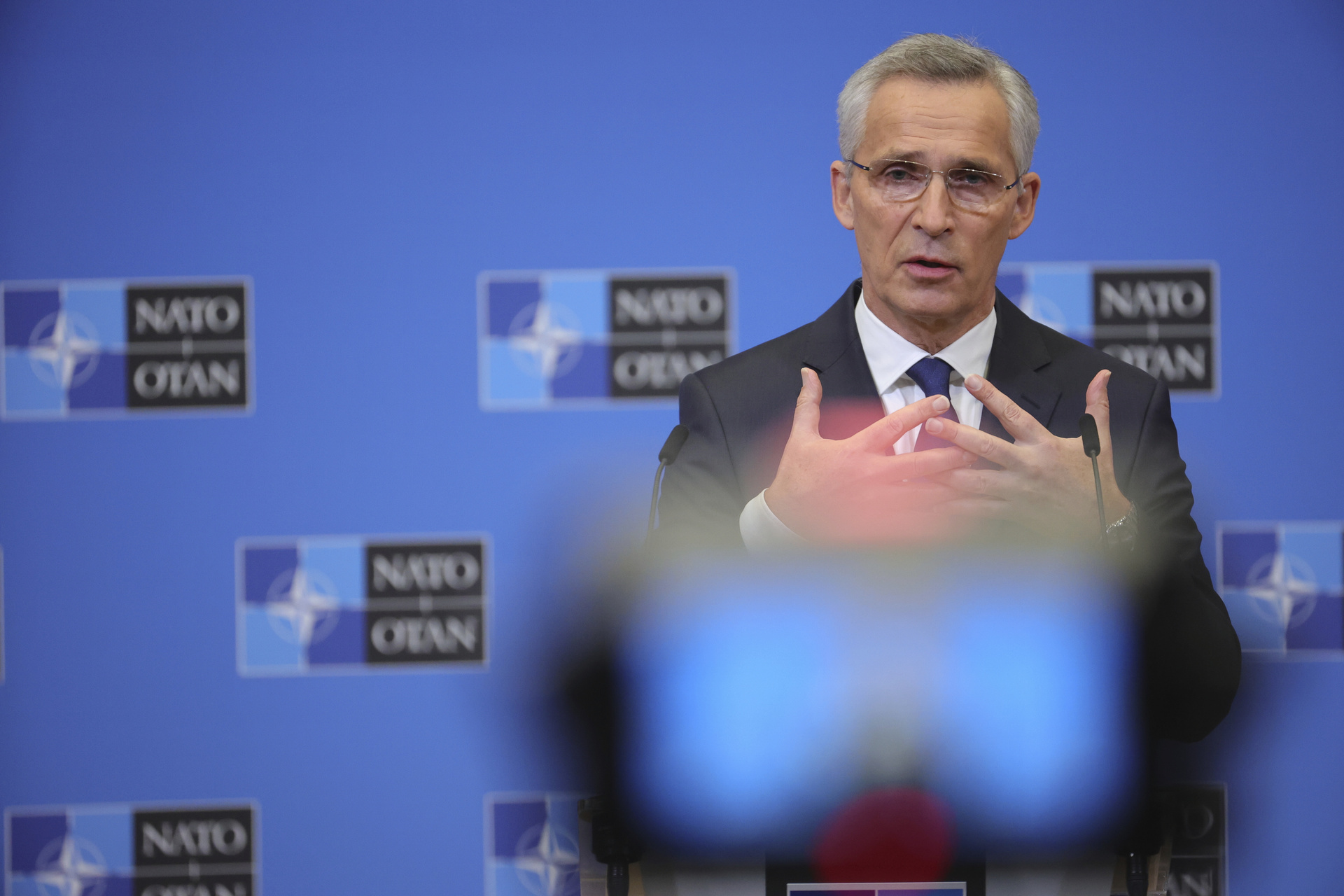 The doors to the North Atlantic Alliance remain open for Ukraine, NATO Secretary General Jens Stoltenberg said at a briefing on the eve of the meeting of the foreign ministers of the bloc countries, which will be held in Bucharest on November 29-30.

“The door to NATO is open.

And we have demonstrated this not only in words, but also in deeds.

In recent years, we have welcomed North Macedonia and Montenegro as new members of the alliance.

And this year they decided to invite Finland and Sweden... Showing that the door to NATO is open, and demonstrating that Russia does not have the right to veto the issue of NATO expansion... This is also a signal to Ukraine,” he said.

The NATO Secretary General also announced the participation of representatives of Kyiv in the upcoming ministerial meeting in Romania.

According to him, they will have to be there to discuss further measures to support Ukraine and strengthen its defense capability.

Thus, the alliance intends to continue to provide military assistance to Kyiv, which, according to Stoltenberg, can contribute to the transition of the parties to peace talks.

“What happens at the negotiating table depends on what happens on the battlefield.

Therefore, the best way to increase the chances of a peaceful resolution (conflict. -

) is to support Ukraine.

Therefore, NATO will continue to support Ukraine for as long as it takes,” Stoltenberg stressed.

In addition, he promised in the long term to assist Ukraine in the transition from Soviet military equipment to NATO standards.

At the same time, the countries of the alliance are now providing assistance to Kyiv, including through an increase in the production of Soviet-style ammunition, the Secretary General noted.

“We have been able to increase … the production of Soviet-era equipment and ammunition, which is extremely relevant and necessary, since Ukraine still has a lot of Soviet-era artillery and they need ammunition and spare components.

And some of our members in the eastern part of the alliance have relevant production facilities, and they have increased production,” said the head of NATO.

Meanwhile, Russia has repeatedly noted that further pumping of Ukraine with weapons only contributes to the aggravation and prolongation of the conflict.

In addition, with its supplies, the West is increasingly drawn into what is happening as a direct participant in the conflict.

“NATO is an accomplice in the crimes of the Kyiv regime,” Russian Foreign Ministry spokeswoman Maria Zakharova wrote on her Telegram channel on November 25, commenting on Stoltenberg’s statement about expanding the production of ammunition in Eastern Europe for Ukraine.

A day earlier, Zakharova, during a briefing, said that more and more facts are emerging that confirm that Russia in Ukraine is confronted primarily by NATO.

“An increasing number of military specialists from the countries of the alliance are fighting as part of a dozen private military companies and the Armed Forces of Ukraine,” the diplomat said.

The harmful effect of further deliveries of Western weapons to Kyiv was also noted by Vasily Nebenzya, Permanent Representative of the Russian Federation to the UN, speaking at a meeting of the organization's Security Council on November 23.

He noted that Ukrainian citizens are already dying from the provided weapons, since the Armed Forces of Ukraine place them directly in settlements.

“For example, today Ukrainian users posted on the Internet photos of rockets that hit residential buildings in Kyiv and Vyshgorod (Kyiv region).

And it turned out that these are American air defense missiles supplied to Kyiv, ”said the Russian envoy.

Nebenzia also recalled that the pumping of Ukraine with Western weapons has become one of the reasons why Russia strikes at infrastructure facilities.

It is worth noting that Kyiv is diligently emphasizing the active participation of NATO in the affairs of Ukraine.

So, on October 12, the head of the Ministry of Defense of the republic, Alexei Reznikov, announced the actual "joining" of the country to the alliance on his Twitter.

“Ukraine is already making a significant contribution to the security of the free world.

I am sure that our victory and successful reforms will open up new horizons for the country,” he wrote after meeting with Jens Stoltenberg.

In turn, Deputy Prime Minister for European and Euro-Atlantic Integration Olga Stefanishina, in an interview with Newsweek magazine on October 15, stated that in Ukraine there is actually a confrontation between the forces of Russia and NATO.

“This conflict gives the Russian Federation, the Russian army, valuable experience of fighting, in fact, with NATO forces, which have already been trained in accordance with NATO standards, have NATO command structures and are equipped with the latest NATO equipment,” the politician said.

President of the country Volodymyr Zelensky never tires of reminding Western partners of the need for Ukraine to join the bloc as soon as possible.

With another demand of this kind, he spoke at the annual session of the NATO Parliamentary Assembly in Madrid on November 21.

“Now, when we are defending our values ​​with you, not just on the squares and streets, but on the battlefield ... it is obvious how unfair and unnatural the alienation of Ukraine from Europe was ... You all see what a significant contribution to the defense of ours with you Ukraine contributes to the community... Thanks to this, you see that Ukraine should become a full member of the EU and NATO,” he said.

After all, according to Zelensky, it is thanks to Ukraine that both the EU countries and the member states of the alliance have rallied among themselves.

Experts link the next promises of the NATO leadership to Ukraine with the intention of the alliance to keep the country in the orbit of its influence in order to continue using it as a tool against Russia.

At the same time, the bloc also does not want to take responsibility for a country that is in a state of armed conflict and whose leadership does not shun provocations, in connection with which various tricks are invented there, says Andrey Koshkin, a member of the Academy of Military Sciences of the Russian Federation.

“NATO, led by the United States, uses Ukraine in its game against Russia, assigning it the role of a constant irritant, designed to wear down the enemy.

And all military aid from the West is sent not to protect Ukraine, but against Russia, so that the conflict does not die out.

For this, various tricks and formulations are invented.

Thanks to them, the West can keep Kyiv on a string: not bringing it too close to itself, but not letting go, ”Koshkin explained.

At the same time, as political scientist Alexander Asafov suggested in an interview with RT, in general, Jens Stoltenberg is not very cunning, promising Ukraine possible membership in the alliance.

“After all, he himself and the other members of the bloc have repeatedly warned that Ukraine's path to NATO will take a very long time.

And today, repeating the thesis of open doors, Stoltenberg may well mean a perspective of 50 years. Moreover, the current charter of the alliance simply does not allow for accelerated accession to the bloc.

In particular, we are talking about the principle of unanimity, which must be observed for the further expansion of NATO, ”the analyst said.

According to him, until this principle is abolished or somehow transformed, Ukraine "has nothing to hope for."

“We see how NATO is now stuffing bumps on the process of including the “prosperous” Sweden and Finland.

The Ukrainian case is not even close to them.

Therefore, until the rules for the inclusion of new members are changed, Ukraine’s accession to NATO in any form is a matter of the future from a parallel reality,” Asafov believes.

In addition, Ukraine is of interest to the bloc not at all as a full-fledged member of the alliance, but as its outpost and vanguard, set against Russia, the political scientist is sure.

“In the alliance, it would be better to overwhelm Ukraine with weapons than to accept it into its ranks, especially with the current leadership, which is ready to go on provocations and burn bridges behind them.

Moreover, its non-bloc status allows the Western military-industrial complex to test their products with much less bureaucratic delays, and even in combat conditions.

Therefore, we should expect that Kyiv will only be promised coveted membership, continuing to use it at its own discretion, ”the expert concluded.