"Resettlement" monitors the negative exploitation of the advantages of "Nafis"

The Minister of Human Resources and Emiratisation, Dr. Abdul Rahman Al-Awar, warned private sector companies and establishments against negatively exploiting the advantages of “Nafis”, stressing that the Ministry has monitored some practices related to Emiratisation in the local labor market, such as some companies reducing the salaries offered to citizens who are candidates. 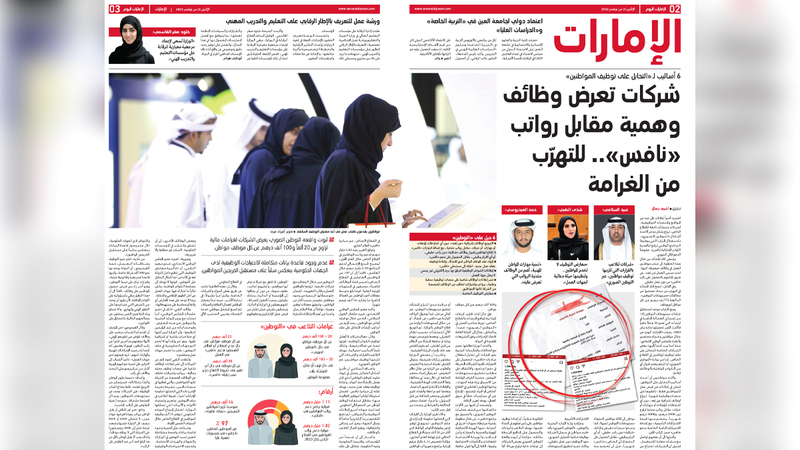 Abdul Rahman Al-Awar: We will not be complacent in applying the necessary measures

"Resettlement" monitors the negative exploitation of the advantages of "Nafis"

The Minister of Human Resources and Emiratisation, Dr. Abdul Rahman Al-Awar, warned private sector companies and establishments against negatively exploiting the advantages of “Nafis”, stressing that the Ministry has monitored some practices related to Emiratisation in the local labor market, such as reducing some companies to the salaries offered to citizens who are candidates to work for them, given that the “Nafis” program It offers them several benefits, including salary support.

The minister said, "From this standpoint, we affirm that the ministry will not tolerate the application of the necessary procedures with any company that attempts to circumvent or exploit the policies and decisions of Emiratisation, including the advantages of the Nafes program, and we will firmly confront the negative and wrong practices related to the Emiratisation procedures that must be followed by private sector companies."

He added that "negative practices, related to exploiting the advantages of the Nafes program, to reduce the salaries offered to citizens who are candidates to work for some private sector companies, are considered an explicit and flagrant violation of Federal Decree Law No. 33 of 2021 regarding the organization of labor relations, as they fall under the category of discrimination between persons, which is one of It will affect job opportunities in the labor market.”

He called on citizens who are about to work or who are currently working in the private sector or members of society in general to report any wrong practices related to Emiratisation in the labor market, by contacting the Ministry's call center 600590000 in order to enhance control and raise the level of compliance.

The Ministry of Human Resources and Emiratisation defined “fictitious localization” as “the registration of a citizen in the company’s register with a formal job for fictitious representation, including employment without real work, just to achieve the formally required goals, or re-employment of citizens on the job in the same facility with the aim and intent of manipulating data and obtaining The benefits associated with that », stressing that proving the fictitious localization incident exposes companies to financial fines ranging between 20 thousand and 100 thousand dirhams for each citizen employee, and in the event that reports of field visits to the sites of establishments in the private sector prove that the employer intentionally and fraudulently settled the fictitious settlement, he is referred To the Public Prosecution to take action in accordance with the legislation approved in the country.

And «Emirates Today» published a field investigation a few days ago, in which it monitored six methods or negative practices adopted by employers to circumvent the employment of their citizens, by directly promoting the latest forms of “fictitious localization” by exploiting the advantages provided by the national program to raise the competitiveness of Emirati cadres «Nafis». , especially the monthly financial support for some categories of citizens working in the private sector, with the approaching date of fines for Emiratisation targets (2% of the total skilled workforce in establishments that include 50 or more skilled workers), which is scheduled to be collected in early January 2023.

The list of negative methods to circumvent “nationalization” included promoting “remote” supervisory jobs, without any requirements for qualifications, skills or experience, in exchange for low salaries with the addition of “competitive” privileges, and persuading citizens to accept “formal” jobs without a real salary or any commitment. Employment, in return for obtaining “Nafes” support, terminating the contracts of the national employee at the facility and rehiring him with new work contracts, to transfer them to those who are entitled to “Nafes”, and job vacancies advertisements attached to an unofficial e-mail that does not represent the employer, and publishing advertisements for vacant jobs on employment platforms Local and international, with salaries and privileges that differ from the same jobs allocated by the same company to citizens, and special job fairs.