Becciu trial, a parallel investigation in Sardinia accuses the cardinal of criminal association

Documents collected by the Finance of Oristano and transmitted to the Vatican by the Court of Sassari attribute the proprietary management of the diocese of Ozieri to the cardinal and his family. Among the findings, the recording of a phone call to the Pope 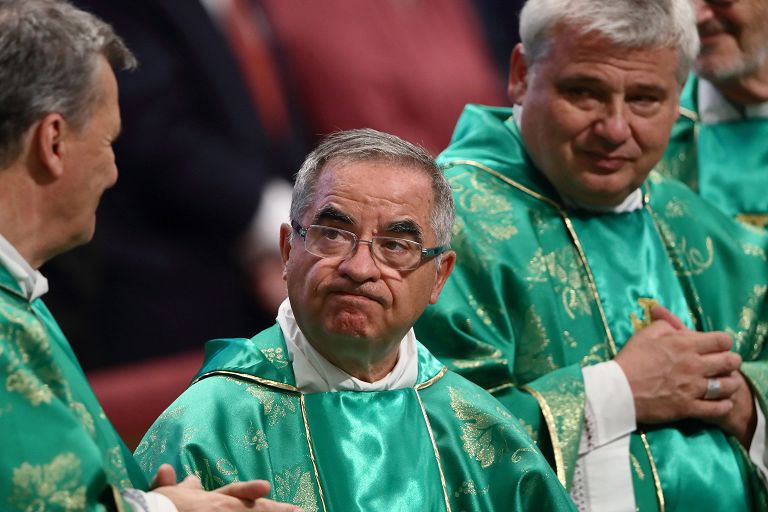 In a line of investigation opened by the Vatican promoter of justice, in parallel with the process on the management of funds in the Secretariat of State, Cardinal

with other people for

This was confirmed today to journalists by the promoter of justice

who, at the opening of hearing No. 37 of the trial against the prelate, reported on the outcome of the rogatory letter for the hypothesis of a crime of association, in which the The Court of Sassari has forwarded to the Vatican the results of the investigations carried out on

Transmitted the documents from the Tribunal of Sassari to the Vatican

When questioned by reporters, both Cardinal Becciu and his defenders (lawyers Fabio Viglione and Maria Concetta Marzo) declared that they knew nothing about the affair.

Although it is a parallel investigation, the Pg Diddi has decided to deposit the results in the records of the current trial, considering them relevant.

The documentation sent by the Court of Sassari via

as well as a series

from the telephone devices seized from Maria Luisa Zambrano, niece of the cardinal, and to Becciu's brother.

” Diddi said during the hearing.

Among other things, there are "considerations on this Office and on the Tribunal itself", as well as considerations on journalists who according to the investigators "have participated in a press campaign against this trial".

There is also talk of Monsignor

, former bishop of Ozieri who died two years ago, "who was the bishop when the account used by the Spes Cooperative was opened", and of his ties "with people in this process".

Cardinal Becciu in the Vatican

Then the transport documents ("delivery notes" of quantities of bread) from Coop Spes to the parishes emerged - exactly 928 documents - which would have served "to justify the sums paid by the diocese to Spes".

forgery of the delivery notes

for 18 thousand kilos of bread

, documents which according to the reconstruction of the Finance were made a few weeks before the start of the current process, but concerning product deliveries dating back to 2018. As explained by the Vatican Pg, the Fiamme Gialle "have gone parish by parish to look for the recipients of the bread and

no one has recognized their signature on

The accusation: "It was the Becciu family who managed the diocese and Caritas"

As for the relationship between the then bishop Pintor and the Becciu family, Diddi spoke of "heavy interference by the Roman Curia on the activity of the diocese", arguing that "Pintor had no control over Caritas:

the diocese and Caritas were essentially managed by the Becciu family

The Public Prosecutor's Office of Sassari has come to our own conclusions".

Furthermore, with regard to the so-called “promiscuous account” used by Spes, “mons.

Pintor knew nothing of his openness ”.

In the chats it emerges that "they were looking for a bank manager who would certify that it was Msgr.

Pintor, the author of the opening of the account, whom he, on the other hand, did not know ”.

From other findings, we can deduce "cordial, friendly" relations between Giovanna Pani, between Becciu's family members, and Cecilia Marogna.

The recording of the phone call to the Pope

According to Diddi, a "

" emerges in the Oristano Finance report : the discovery of the

recording of a telephone call between Cardinal Becciu and Pope Francis

on 24 July 2021, three days before the opening of the trial in the Vatican and about ten days after the Pontiff left the Gemelli following colon surgery.

"In addition to Becciu, Zambrano and an unidentified third person are present in Piazza del Sant'Uffizio".

From the recording, made with the phone of the cardinal's niece and

retransmitted in the courtroom behind closed doors

, Becciu can be heard complaining to the Pope "

You have already condemned me, it is useless for me to go to trial!

The cardinal also talks about the money paid on the advice of Cecilia Marogna to the British agency Inkerman for the release of a Colombian nun kidnapped by jihadists in Mali.

“For the ransom - reported Pg Diddi -

to pay the money to Inkerman.

the cardinal said that the Pope was aware;

in the phone call, however, the Holy Father remains perplexed

On the other hand, he had just come out of his hospitalization, he was tired ”.

The rest of the hearing was dedicated to the interrogation of the prosecution witness, Monsignor Alberto Perlasca, former head of the Administrative Office of the Secretariat of State as well as a civil party in the trial, testimony that will continue tomorrow with the examination by the defence.