The former prefect of the Congregation for the Causes of Saints speaks for more than two hours in front of the promoter of justice in the Vatican and offers his version of the facts on the story that led to the resignation, wanted by the Pope, in September 2020 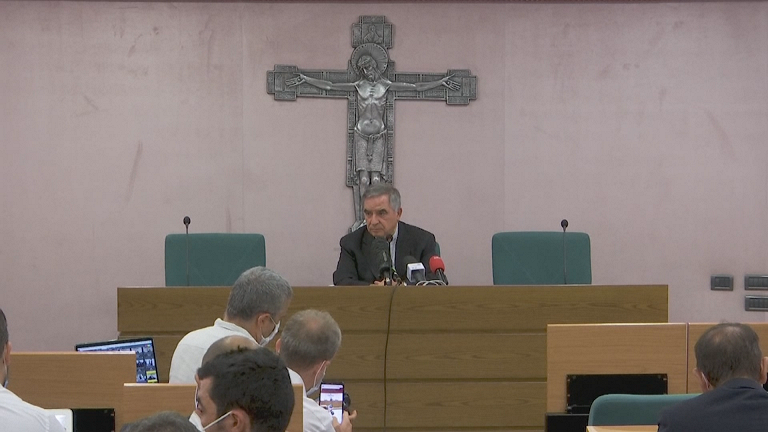 deprived him of the office of Curia and of the rights of the cardinalate in a shock-audience, "a public pillory of global proportion began for me: even in Angola, where I had been nuncio for seven years and half, they told me that national television dedicated a week of debates to the subject;

I was splashed on the front pages of newspapers all over the world;

deprived of any ecclesiastical office;

relegated to the margins of the Curia and the Church.

It pained me and continues to pain me, then, to have exposed my family to excruciating and unjust suffering".

spoke in a long

two and a half hour outburst of "spontaneous declarations"

the management of the funds of the Secretariat of State

, of which Becciu was for seven years (from 2011 to 2018) substitute for General Affairs, the highest role after that of secretary.

At the time of his resignation, Becciu was also prefect for the Congregation for the Causes of Saints.

Cardinal Becciu's press conference two years ago, when he resigned from the Secretariat of State

The meeting with Cecilia Marogna

In yesterday's hearing, the now former member of the college of cardinals among the electors (the cardinals who have not reached the age of 80) provided a detailed reconstruction of the facts on which the accusations against him relate - which the person concerned he rejected outright.

His statements were followed in the afternoon by another

two and a half hours of interrogation

by the promoter of justice (the Vatican prosecutor) Alessandro Diddi.

Becciu retraced his story in detail over the seven years in which he was substitute for General Affairs, before becoming prefect for the Causes of Saints, and he did not fail to give his version of the

, on which he had so far opposed the "pontifical secret", from which, however, the Pope dispensed him.

Indeed, Becciu thanked the Pontiff for having allowed him "so that I can speak freely and defend myself with total transparency".

Collaboration in security and intelligence

Among other things, even on his knowledge of the former Sardinian manager he expressed "a strong and vibrant indignation at how this relationship has been distorted with offensive inferences, of the lowest nature, harmful to my priestly dignity.

I believe that this attitude also betrays a lack of consideration for women in general, and I feel compelled to wonder if such treatment would have been reserved for a man".

However, Becciu recalled how he met the woman who asked him for an audience to propose a

collaboration in the field of security and intelligence

and, appreciating her abilities, decided (authorized step by step by the Pope) to make use of her advice on the occasion of the

kidnapping in Mali in February 2017

of the Colombian nun Gloria Cecilia Navaes Goti, who then returned free four and a half years later.

The Sloane Avenue building in London, purchased by the Curia

The purchase of the London palace

At this point in the story, the London agency Inkermann enters the field, and also the

), which she guaranteed aimed at the release of Sister Gloria, which instead

Becciu said he did not use St. Peter's Pence for the various investments, including for the famous

in London, but "the reserve funds of the Secretariat of State".

And he reiterated how the 125,000 euros transferred to Caritas in Ozieri, through the

, had exclusively a "charitable destination": Angelo Becciu in fact illustrated how "as a priest I blush when I think of Tonino's commitment to the poor and to the community".

But precisely that accusation, of "enriching my family", "was the mother of all my misfortunes".

From that "criminal transfer" he was in fact summoned to an audience with the Pope, after which the following morning he hurried to convene a press conference because, explained the Sardinian cardinal, "the statement issued was so aseptic, in the evening they bombarded me with phone calls asking me if I resigned for 'sexual crimes', something that outraged me”.

The dossier against Pell

There is also some for the various financial movements that ended up in the prosecution file, for relations with the other defendants ("I would have abused my powers, not for personal gain but to enrich people essentially unknown to me").

In the various passages Becciu has always reaffirmed "forcefully my absolute innocence". The cardinal also denied the "shameful accusation, the very serious insinuation" of having even financed

with money from the Secretariat of State , later acquitted at home of the charge of child abuse.Meanwhile yesterday, at the beginning of the hearing, the

he filed a civil action against Becciu for "subornation of a witness", and against four other defendants for fraud, for having "misled" him into signing the agreement on 1,000 actions to control the London building.