In Beijing, President Xi Jinping announced the closure of the 20th Congress of the Chinese Communist Party (CCP), meeting in front of some 2,300 delegates and supposed to chart the political future of China for the next five… 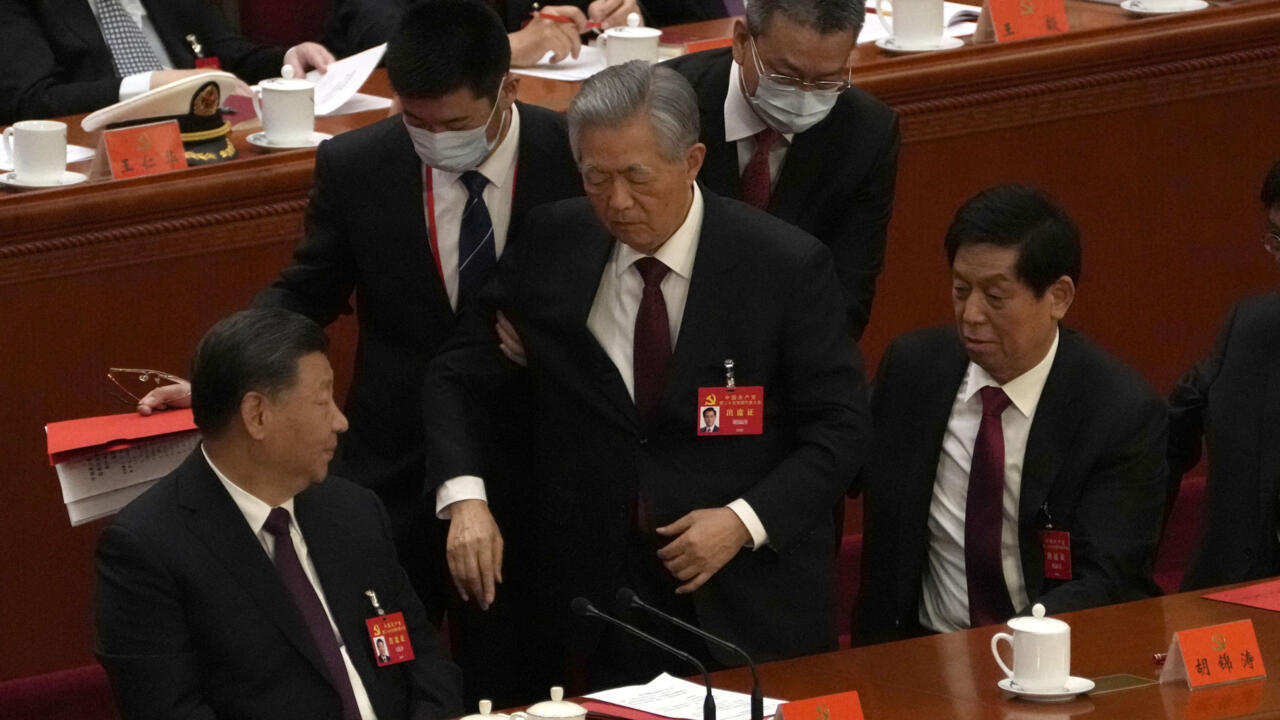 Former President Hu Jintao is helped out of the hall during the closing of the 20th Congress of the Communist Party of China (CCP), October 22, 2022. © Andy Wong / AP

In Beijing, President Xi Jinping announced the closure of the 20th Congress of the Chinese Communist Party (CCP), meeting in front of some 2,300 delegates and supposed to chart the political future of China for the next five years.

This congress must also crown President Xi Jinping for a new term.

Among the images to remember, the departure of the ceremony of former President Hu Jintao.

The scene took place just after the entry of the journalists and it would seem that the former Chinese president was taken away against his will.

Equipped with binoculars, the journalists were in any case able to see two men asking Hu Jintao to get up.

The 79-year-old man then seems to refuse or in any case hesitate, then he ends up being accompanied to the exit.

This scene, to say the least unusual, even if the man who was president of China from 2003 to 2013 is said to be sick, has not been explained or reported by the state media.

In the buses, everyone is wondering about Hu Jintao's exit at the end of the session, and the empty chair next to Xi Jinping.

The former president left before the votes of the amendments to the party statute.

He left the room before the unanimous introduction of Xi Jinping Thought on Socialism with Chinese Characteristics.

This astonishing scene therefore arouses a lot of comments.

This image of an empty chair to Xi Jinping's left at the end of the ceremony comes as the Chinese president prepares to begin his third term.

A first since Mao, and this extension has sparked criticism within the party.

As for the composition of the

, it will be presented on Sunday.

For the moment, nothing has filtered Six men should appear tomorrow alongside the Chinese president.

For example, Wang Yang, who has reached retirement age.

Some had a presentiment of the president of one of the assemblies as Prime Minister.

On the other hand, Wang Yi, who is the same age as Wang Yang, remains the Minister of Foreign Affairs.

Shanghai city CCP boss Li Qiang, who is a friend of Xi Jinping, is also on the long list.

What will be scrutinized tomorrow is above all how many relatives of the current president are on this permanent committee.

► To read also: The 20th Congress of the CPC intends to regulate the accumulation of wealth