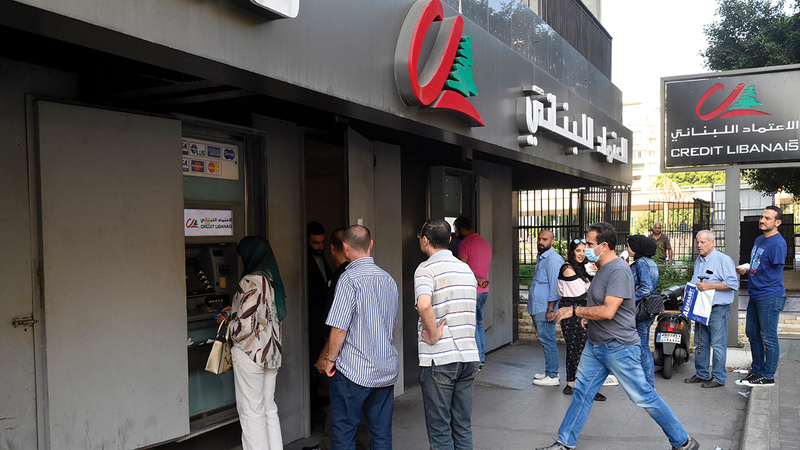 Lebanese banks closed their doors to customers after a series of raids by depositors.

After his meeting with the President of the Lebanese Republic, General Michel Aoun, in Baabda, yesterday, the Assistant Secretary-General of the League of Arab States, Ambassador Hossam Zaki, affirmed that the League of Arab States supports and supports Lebanon's rights to its lands and waters, and also called on Lebanese politicians for more consultations to reach understandings about the entitlement of Lebanon. presidential.

In detail, the Lebanese President received Ambassador Hossam Zaki, yesterday before noon at Baabda Palace, according to a statement issued by the Presidency of the Republic.

Zaki said in response to a question about the issue of demarcation of the maritime borders, which takes place through the American mediator, “Our position is clear, and is represented in full support for Lebanon in the agreement and its objectives, and what it is doing to preserve its rights, and we have previously announced that, and I confirm it again now.”

The League supports and supports the Lebanese rights in Lebanon’s lands and waters, and stands by its side on this issue.”

He explained that his visit to Beirut "falls within the framework of the university's interest in the Lebanese situation, especially with regard to the presidential election and the positions of the Lebanese parties regarding it, with emphasis on the importance of electing a new president of the republic, and the need for everyone to cooperate to achieve this goal."

Zaki added, "We feel that approaching this maturity without signs of reaching a kind of consensus about who will reach the Lebanese presidency, is a matter of some concern, because Lebanon in this period and these circumstances does not need a presidential vacuum, and this is an important matter. ».

He said, “Our vision on this issue requires that internal Lebanese understandings must take place, and that Lebanese politicians must communicate with each other to reach what must be achieved, that is, an agreement on the presidential election.

As for the external factors, even if they are similar to the support of the Arab League, they remain external, and the main dependence on them should not be.”

He declared that “the League is not a biased player, but rather puts the interest of the Lebanese state above any consideration, and does not have narrow interests and vision,” considering that “taking an Arab initiative, it may be too early to talk about it, and contacts can be intensified with everyone to explore opportunities to reach consensus before the end of the meeting.” set deadlines.

For his part, Aoun indicated that "Lebanon is awaiting the outcome of contacts conducted by the American mediator, Amos Hochstein with the Israelis, to determine the course of the indirect negotiations to demarcate the southern border."

Zaki's statements about the presidential election came after his meeting with the caretaker prime minister, Najib Mikati, at the Grand Serail.

The meeting was attended by the Assistant Secretary-General of the League of Arab States, Ambassador Abdul Rahman Solh, according to a statement issued by the official website of President Mikati.

After the meeting, Ambassador Zaki said, "We reiterate the Arab League's interest in Lebanon, and its support in all important occasions, especially as it is on the verge of an important presidential entitlement.

Yesterday I had a tour with the heads of the main blocs in Parliament, the Free Patriotic Movement, the Lebanese Forces, the Kataeb, the Progressive Socialist Party, and the Amal Movement.

He added, “Everyone agreed on the importance of the merits, but there are differences in positions, but we believe that it is worth more consultation and communication between Lebanese politicians to reach the required understandings so that the country can move on the right path.

We hope that communication will continue, because it leads to understandings, and if he wants, the country will be on the verge of something positive.”

It is noteworthy that the Lebanese Parliament failed on the 29th of last month to elect a new president for the country, to succeed President Aoun, whose six-year term expires on October 31.

On the other hand, two bankers told Reuters that Lebanese banks unanimously decided to close their doors to customers indefinitely, after a series of raids by depositors seeking to restore their frozen deposits in the banking system, due to the financial collapse in the country.

The two bankers stated that the banks will continue their urgent operations for clients and back office services for companies, but front office services will remain suspended after more than 12 break-in incidents in less than a month.

Banks closed for nearly a week last month, due to similar incidents, but resumed work at the beginning of October to allow employees to withdraw their salaries.