At least 11 people were killed, as a result of Russian bombing yesterday targeting residential buildings in the southeastern city of Zaporizhia, and while the Kremlin accused Ukrainian President Vladimir Zelensky of calling for a third world war, US President Joe Biden considered that the Russian threats to 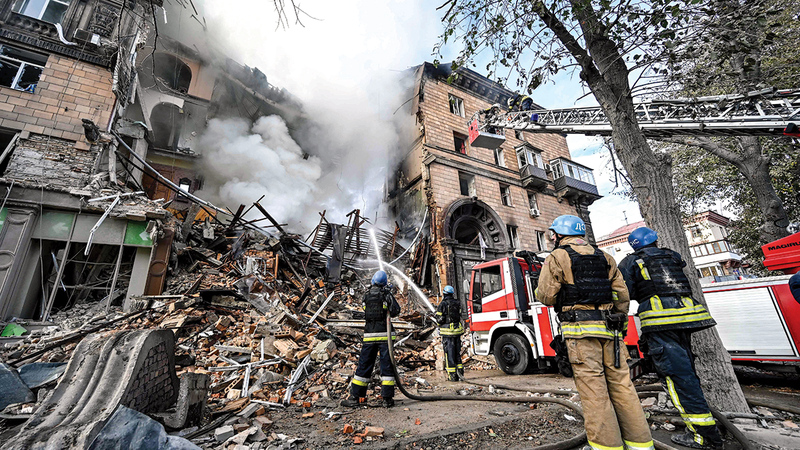 Biden: Russia's threat to use nuclear weapons puts humanity at risk of an "end of the world" war

Ukrainian firefighters put out a fire in a building after a Russian raid in the city of Zaporizhia.

At least 11 people were killed, as a result of Russian bombing yesterday targeting residential buildings in the southeastern city of Zaporizhia, while the Kremlin accused Ukrainian President Vladimir Zelensky of calling for a third world war, and US President Joe Biden considered that Russian threats to use nuclear weapons endanger humanity. the threat of an "end of the world" war.

In detail, the Ukrainian authorities said that at least 11 people were killed in the Russian bombing of residential buildings in the southeastern city of Zaporizhia.

Yesterday, the Ukrainian Civil Defense announced the rescue of 21 other people from under the rubble, after the Russian attacks, some of whom are in serious condition.

Pictures showed rescuers searching under the rubble to find the missing.

The Ukrainian authorities added that the missiles hit two multi-storey buildings the day before yesterday.

The local governor said the missile attack on the city of Zaporizhia had buried some residents under the rubble.

Ukraine announced that Russia attacked the city of Zaporizhia using suicide drones, for the first time.

Kamikaze parades were used in the attack.

In an online address to the European Political Group, a new forum for security and energy cooperation, Ukrainian President Volodymyr Zelensky accused Russia of deliberately targeting the same site twice in a row.

Speaking to Australia's Lowy Institute, Zelensky said NATO should launch pre-emptive strikes on Russia to prevent its use of nuclear weapons.

He did not go into details about what kind of strikes he intended.

In Moscow, Kremlin spokesman Dmitry Peskov denounced the Ukrainian president's comments as "a call to start another world war with unpredictable and dangerous consequences."

Kremlin spokesman Dmitry Peskov said that Zelensky's demand from NATO to launch a pre-emptive strike on Russia was only an explicit call to ignite a third world war.

For his part, Russian Foreign Minister Sergei Lavrov said yesterday that the statements of the Ukrainian president, in which he proposed launching pre-emptive strikes against Russia, "emphasizes the need" for a "special operation" in Ukraine.

In Washington, US President Joe Biden considered that Russian threats to use nuclear weapons in the conflict in Ukraine put humanity at risk of an "end of the world" war, for the first time since the Cuban missile crisis in the middle of the Cold War.

"We haven't faced the prospect of Armageddon since Kennedy and the Cuban missile crisis" in 1962, Biden said at a fundraiser in New York, adding that his Russian counterpart, Vladimir Putin, was "not joking" when he made those threats.

"For the first time since the Cuban missile crisis, there is a direct threat of the use of nuclear weapons if things continue on the way they are now," the US president added.

Biden stressed that Putin "is not joking when he talks about the possible use of tactical nuclear, biological or chemical weapons, because his army, we can say, is largely underperforming."

And Biden added, "We are trying to understand how Putin will find a way out, how he will be positioned in such a way that he does not lose face and does not lose a large part of his power in Russia."

In Prague, the European Union's foreign policy chief Josep Borrell expressed his desire that the European Union leaders support another package of military aid to Ukraine, in conjunction with their meeting during an informal summit in the Czech capital Prague.