Usually well informed, this source gives an account of operations on the front line that would prepare a counter-offensive in this area as well. 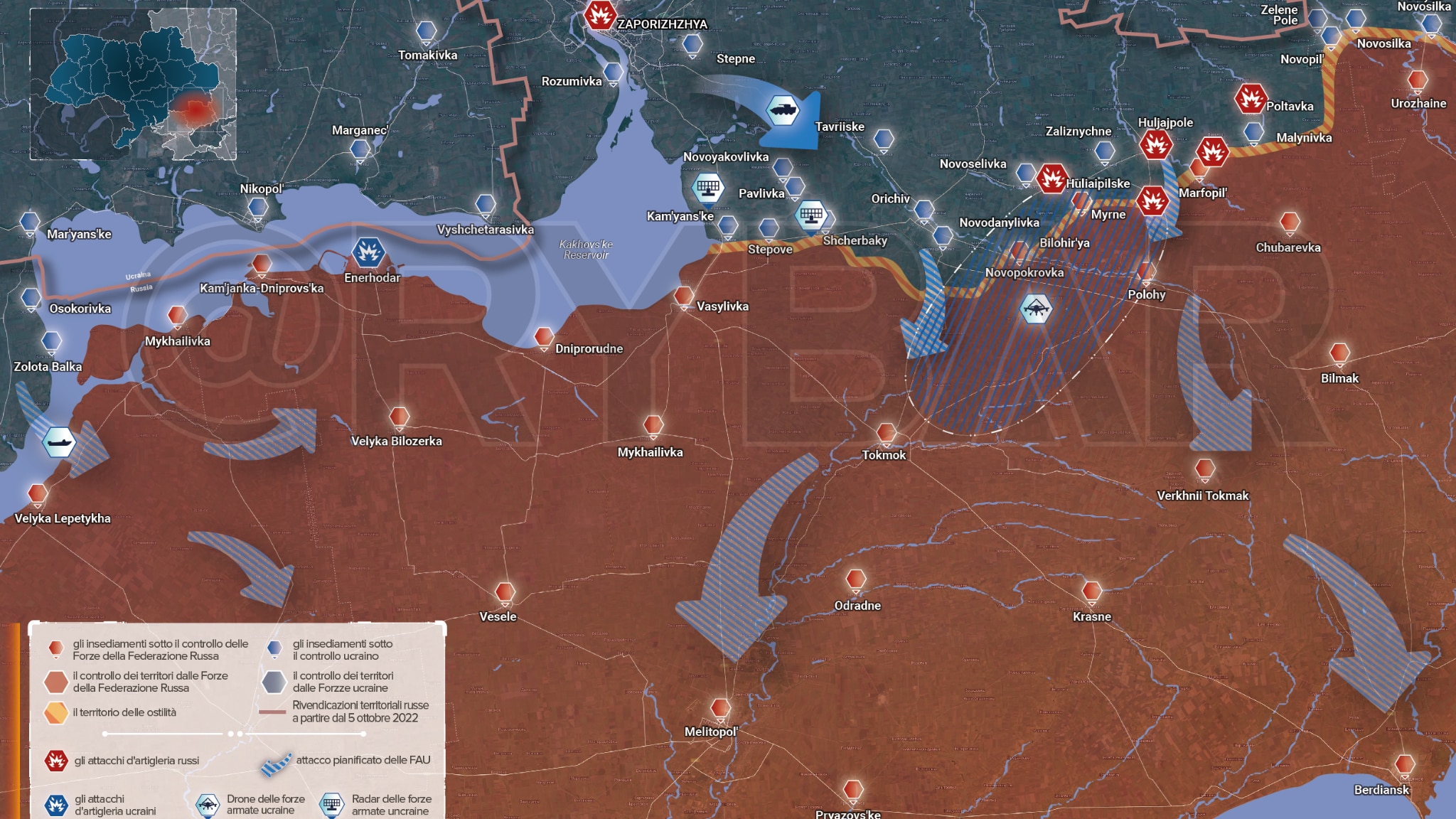 ", who support the invasion of Ukraine but question how the Kremlin is conducting operations, especially in recent months.

A source therefore that he has no interest in attributing credit to the forces of Kiev.

He is very consulted by Russian soldiers in the field, who often find information there that their officers do not communicate: probably this is the reason, the maps and updates that he publishes daily are often reflected in the real situation in the field.

In the early afternoon of today, he spoke of a

-offensive , after the north-east one, on the borders of the three regions of Kharkiv, Donets and Luhansk, and of the south-west, in the Kherson region.

Pending any further feedback, this forecast should be

considered with some caution

, but the very fact that it has been published is in itself news.

"In the direction of Zaporozhzhia, the Ukrainian armed forces continue to accumulate personnel and military equipment for the offensive", writes Rybar, explaining that "the Ukrainian formations intend to attack Russian positions in the

districts in order to cut the front. and a possible exit to

Moreover, Huluiaipole is a city with an important history: between 1918 and 1921, during the years of the Russian revolution, it was the de facto capital of the anarcho-communist commune known as

Rybar continues: “In recent days, the drones of the 44th artillery brigade have actively searched for refueling facilities and air defense systems of the armed forces of the Russian Federation, also thanks to the support of pro-Ukrainian citizens of the region.

The Ukrainian leadership, on the wave of success in the Kharkiv region and the Krivoy Rog sector, intends to implement a scenario of actions similar to Zaporozhzhia:

a multi-directional attack in the most vulnerable points,

followed by the deployment of

mobile groups that wedge into the defensive lines

In recent days, Ukrainian reconnaissance groups have actively probed the defense of the Russian armed forces in various sectors of the front ", using" drones Drones such as

"Close to the front line.

The goal would be to “disable anti-aircraft missile systems” and hit “ammunition depots”.

Also according to Rybar, "the landing of tactical troops from the left bank of the Dnieper" with the aim of "hitting the rear of the Russian group in

", the city where the Zaporizhzhia nuclear power plant is based, "and entering space operating of Melitopol ".

Melitopol has repeatedly been the scene of

by the Ukrainian resistance.

This morning Ivan Fedorov, the pro-Ukrainian mayor of the city, who was arrested in March by the Russians and then

in a prisoner exchange, reported massive explosions in the northern part of the city, followed by the appearance of a column. of black smoke, attaching this video whose geolocation has been confirmed.

a pro-Ukrainian Twitter profile usually cautious and accurate in reporting movements from the front, reported the

towards the Kherson region.

This disengagement may have created favorable conditions for a raid by the Kiev forces.

a Russian missile hit an apartment building in the Zaporizhzhia region,

killing at least three people and wounding 12. Ukrainian Foreign Minister Dmytro Kuleba said on Twitter that Russia has fired seven missiles at "people sleeping peacefully in their homes. Others struck during the day. The Russians continue to deliberately attack civilians to sow fear. "

This attack took place after Putin signed the annexation law of the four Ukrainian regions partially occupied by Russia, including Zaporizhzhia itself.