A small kingdom the size of Belgium in southern Africa, Lesotho is holding legislative elections on Friday, October 7. Back in five sections on the turbulent history of this country politically… 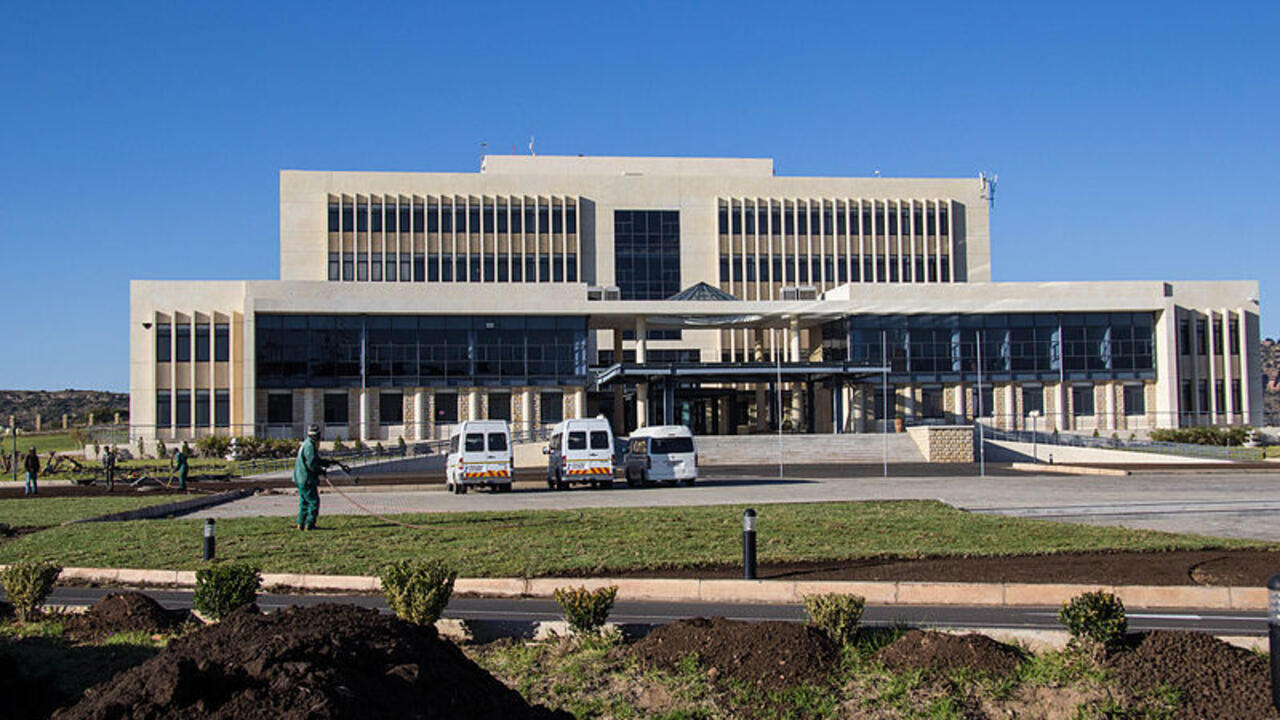 The Parliament of Lesotho, built by China.

A small kingdom the size of Belgium in southern Africa, Lesotho is holding legislative elections on Friday, October 7.

Back in five sections on the turbulent history of this politically unstable country and economically dependent on the South African behemoth.

Lesotho is a small landlocked country in the heart of South Africa.

the kingdom in the sky

A small country in southern Africa, Lesotho is landlocked in South African territory.

The Sotho nation was formed around the 1820s around a prestigious chief, Moeshoeshoe 1er.

The population of Lesotho (2.14 million), made up of historically disparate groups fleeing ethnic war and the expansionist tendencies of Boer settlers in the 19th century, is grouped in the highest part (3,000 meters) of the Drakensberg massif.

The capital, Maseru, is the largest city in the country, with around 350,000 inhabitants.

The two official languages ​​of Lesotho are English and Sotho.

A constitutional monarchy, Lesotho has experienced an unstable political history since its independence, punctuated by military coups.

The year 1966 is the year of the coronation of King Moshoeshoe II, under whose aegis the first legislative elections are held.

They were won by the Basotho National Party (BNP).

But in 1970, the constitution was suspended by Prime Minister Leabua Jonathan following disputed elections, marking the beginning of a long period of unrest and instability.

The king in bickering with the Prime Minister is forced into exile.

In 1986, the apartheid regime in South Africa fomented a coup in the country to prevent it from serving as a rear base for the African National Congress (ANC), then spearheading the fight against the segregationist regime.

Between 1986 and 1993, the country was governed by a military council, headed by a senior army officer, General Justin Lekhanya.

Return in 1993 to the constitutional monarchy, with the restoration of civil power following multiparty elections won by the Lesotho Congress for Democracy (LCD).

In 1998, troubles broke out again, after the LCD's landslide victory in the legislative elections.

The election is contested by the opposition, which takes its supporters to the streets.

Demonstrations, coupled with an army mutiny, killed 75 civilians, leading to the intervention of South African and Botswana troops.

Sacked by the mutineers, the capital Maseru is a field of ruins.

Over the past decade, Lesotho has returned to its legendary chronic instability, as evidenced by the numerous coup attempts.

Between 2013 and 2020, four governments succeeded each other at the head of the country.

The last Prime Minister to bear the brunt of the ambient chaos is called Tom Thabane, appointed head of a coalition government in 2017. Three years later, he was forced to resign, due to suspicions of complicity in the assassination of his ex-wife.

Before being removed from power, the head of government had paralyzed the country for six months by refusing to resign.

A new coalition led by the Minister of Finance in the outgoing team has governed the country since May 2020, with a roadmap to put in place far-reaching reforms aimed at curbing political instability.

Due to a lack of consensus in Parliament, the reform project could not be completed and the stabilization of political life so long awaited by the population and by Lesotho's international partners has been postponed indefinitely.

Strengths and weaknesses of the Lesotho economy

With GDP per capita stagnating at USD 1000 (2020), Lesotho is among the poorest countries on the planet.

Nearly 75% of the population lives in rural areas and depends directly on agriculture and livestock.

In addition, Lesotho is very dependent on remittances from migrants, which represent more than 20% of the country's GDP in 2020 and the vast majority of which come from South Africa.

With more than 40,000 Lesotho workers in the mines around Johannesburg, Lesotho has become one of the main suppliers of labor for South African mining companies.

The vitality of the South African economy in general makes South Africa a real pole of attraction for the population of Lesotho who suffers from chronic unemployment.

This economic dependence is reinforced by the anchoring of the Lesotho currency, the loti, to the South African rand within the framework of the common monetary zone between the two countries and Botswana, Namibia and Eswatini.

Workers in a textile factory in Lesotho World Bank/ J.Hogg

However, the Lesotho economy is not lacking in some assets, among which we must mention the textile and diamond sectors whose activity represents 10% and 7% of the national GDP respectively.

The water sector is also very strategic for the economy of Lesotho, with this small country exporting a significant part of its water resources to its large neighbor South Africa, via a system of dams and tunnels dug in the mountains. .

The kingdom's abundant water reserves are very precious for South Africa, whose major cities, notably Pretoria and Johannesburg, are supplied by the spectacular Katse dam, built in 1996, on the Malibamat'so river.

Last but not least

, tourism also represents a non-negligible sector, estimated at about 10% of GDP.

This dependence is not only economic, it is also political, as evidenced by the major role played by Pretoria in mediating the internal crises that Lesotho regularly experiences.

This turbulent monarchy has experienced half a dozen coups and mutinies since its independence.

For fear of seeing the turbulence spill over into its adjoining provinces, the South African authorities have often been tempted to intervene militarily in internal Lesotho conflicts in order to impose peace.

But since the military fiasco of 1998 when the South African army intervened against an attempted coup, Pretoria has favored negotiated solutions to settlements by arms.

In 2017, it was the diplomatic mediation of the Southern African Development Community (SADC), which had made it possible to rescue the country from chaos during yet another coup by the army and to coordinate the return to power of Tom Thabane democratically appointed at the head of a coalition of parties.

Pretoria also weighed in the multi-party talks that took place under the aegis of SADC to push Maseru to adopt much-needed institutional reforms to end its chronic political instability.

Go to the polls, citizens!

A poster of outgoing Prime Minister Pakalitha Mosisili on a street in Maseru, capital of Lesotho, on May 30, 2017, four days before the June 3 legislative elections.

Lesotho voters are invited this Friday, October 7, 2022 to elect their deputies and renew their parliament.

The Legislative Assembly has 120 seats including 80 deputies elected by majority vote and 40 appointed by proportional representation.

In this mixed parliamentary system with a king without real power and a Prime Minister in charge, political life is very fragmented with around sixty parties taking part in the election this year.

As no party managed to win an absolute majority at the polls, the country has been ruled for ten years by coalition governments.

The chronic political instability from which Lesotho suffers explains the lack of confidence of the population in its politicians.

Liesl Louw-Vaudran: "No party has a real chance of winning an absolute majority in the October 7 election"

A specialist in southern Africa, Liesl Louw-Vaudran is an analyst (senior researcher) at the Institute for Security Studies in Pretoria.

RFI: What are the major issues of the October 7 election?

Will the elected officials be up to the serious problems of daily survival and development experienced by the Lesotho population?

This is the main issue of this democratic election.

About sixty political parties are participating in this election, proposing to represent 1.38 million voters of voting age.

In this context, the post-election political landscape promises to be deeply fragmented, with political personnel motivated above all by their own interests rather than by the concern to serve the interests of the population.

In a country like Lesotho where 30% of the population lives on less than $1.90 a day and unemployment is rampant, voters expect politicians to mostly help them find solutions to their problems. economic.

crime is a major challenge that the next government will have to tackle head-on.

Tiny Lesotho has the highest death rate from assassinations, second only to South Africa.

Gang warfare is a major problem for the population.

What are the main political parties in Lesotho?

There are several major political parties, but no party has a real chance of winning an outright majority on Friday.

The coalition of four parties currently in power led by the All Basotho Convention (ABC) is likely to be the big loser in this election in the face of the growing popularity of a new movement launched by Sam Matekane, a famous businessman .

His party, which he called the "Revolution for Prosperity", could create a surprise.

The man promised to support, if elected, small entrepreneurs and to deal seriously with economic problems.

What explains the chronic instability from which Lesotho suffers?

The corruption of the political elite and the institutional system without real safeguards favor internal disputes, which ultimately affect the life expectancy of the coalitions in power for ten years.

Even the security forces are politicized, with the army and the police taking sides in the battles between power and opposition.

The mixed electoral system of proportional representation is no stranger to the fragmentation of political life that we are witnessing, with the incessant creation of new movements and parties and political nomadism.

The reforms, if successful, will curb this latter practice.

They provide for the constitutional monarch to become the commander-in-chief of the armed forces in place of the prime minister.

There seems to be a consensus around these reforms, but so far any attempt to reform politics has ended in failure…

Negotiations to improve the Lesotho political system began in 2014, the day after the last coup that ousted the then Prime Minister from power.

The process missed its July 2022 deadline when parliament had to be dissolved and new legislative elections called.

Are you worried that voters will shun the ballot?

Yes, I'm afraid, because the population no longer trusts the political class.

Despite the national conferences which had largely endorsed the reforms, parliament is slow to adopt them.

That said, the launch of his new party by businessman Sam Matekane could help create new electoral dynamics.