Writers and thinkers reading the political scene in the region

A number of Arab writers and thinkers discussed during the “Reshaping the Political Scene in the Region” session yesterday, within the closing day of the Arab Media Forum, in the presence of Her Highness Sheikha Latifa bint Mohammed bin Rashid Al Maktoum, President of the Dubai Culture and Arts Authority (Dubai Culture), the strategic shifts in the region. 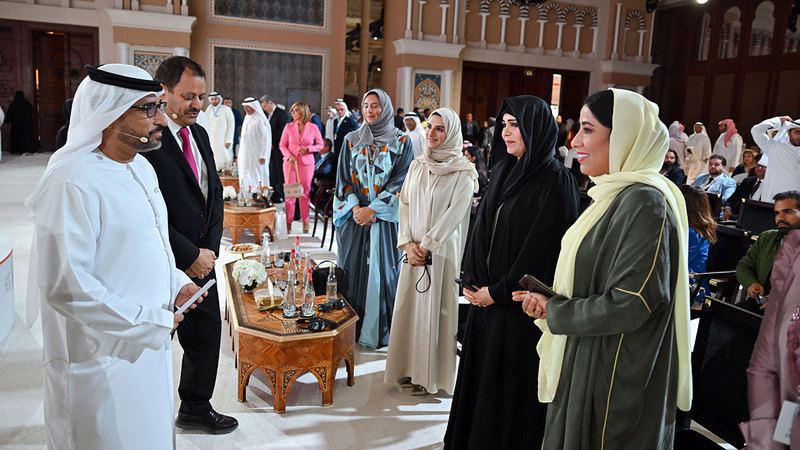 In the presence of Latifa bint Mohammed, they discussed global strategic transformations

Writers and thinkers reading the political scene in the region

A number of Arab writers and thinkers discussed during the “Reshaping the Political Scene in the Region” session yesterday, within the closing day of the Arab Media Forum, in the presence of Her Highness Sheikha Latifa bint Mohammed bin Rashid Al Maktoum, President of the Dubai Culture and Arts Authority (Dubai Culture), the strategic transformations that They also highlighted the potential repercussions of the change in the map of powers in the Middle East, in addition to the role of the UAE as a regional power with a global vision in working with partners to enhance the security and stability of the region.

The session was hosted by the Egyptian media, Imad Al-Din Adib, the editor-in-chief of Al-Nahar newspaper, Nayla Tueni, the writer and researcher in Middle Eastern affairs, Abdulaziz Al-Khamis, and the head of the Emirates Journalists Association, Muhammad Al-Hammadi, and the media dialogue was moderated by Fadila Souissi.

Adeeb stressed that the coming year will have negative repercussions on many of the world's non-oil and food-importing countries, which will cast a shadow over the global economy, and call for good management of the economic crisis the world is witnessing, based on finding alternatives, and searching for solutions that enable countries to overcome its consequences.

On the Iranian nuclear agreement, Adeeb stressed that the Arab world will not benefit, whether the Iranian agreement with the West is signed or not, and that the Iranian money that the Arabs released after the first agreement was used by Iran to promote extremism and destabilize the region, expressing his fear of a recurrence The same scenario, explaining that the insistence of the American side to limit the Iranian threat to being a mere nuclear threat is a misunderstanding of the scene in the region, and that the main problem and the real danger from his point of view lies in the expansionist thought, which hinders efforts of partnership and cooperation and work on the stability and progress of the region.

Al-Khamis stated, that the project of the Brotherhood and political Islam in a number of Arab countries has fallen, and that there are projects linked to the idea of ​​mixing religion with politics will inevitably fall, because this experiment has proven its failure at a time when the world is going through great economic and social challenges, and that the countries of the region have bypassed the idea of ​​repressive regimes and terrorism. Religious leaders led to competition in attracting investments, developing infrastructure, and creating job opportunities for young people, which the Brotherhood failed with distinction.

On the Iranian nuclear deal, he expected Thursday that it would be accomplished with the West, but that would not stop Iran from the idea of ​​acquiring nuclear weapons.

Al-Hammadi sees the importance of cooperation in maintaining the stability of the Arab region, especially the Arab Gulf region, with its common history and destiny, and blood and kinship relations, pointing to the progress in Qatari-Arab relations, after the signing of the Al-Ula agreement under the auspices of Saudi Arabia.

He pointed out that the risks are not generalized to all countries, because the classification of risks may differ from one region to another, according to the orientations and policies of each country separately.

For her part, Nayla Tueni confirmed that a large part of the Lebanese people are now looking to get rid of Iranian interference in Lebanese affairs and decisions, noting that the results of the parliamentary elections reflect the Lebanese society's keenness to overcome the economic, political and social crises that Lebanon is suffering from.

She drew attention to the Lebanese political future, which may enter a dark tunnel, as a result of the political vacuum that may be caused by the delay in the election of the President of the Republic.

She stressed that Lebanon was affected by the political stances of some Lebanese symbols, which do not represent all the Lebanese, and was subjected to sanctions and boycotts from a number of sister countries. These stances also affected the Lebanese communities abroad.

"The Iranian danger is not the nuclear threat, but the expansionist ideology."

"A large part of the Lebanese people are now looking forward to getting rid of Iranian interference in Lebanese affairs and decisions."

"The project of political Islam has fallen... and the countries of the world are competing to attract investments."

"The classification of risks differs from one region to another, according to the trends of each country."