The 2022 Nobel Prize in Chemistry was awarded on Wednesday to Dane Morten Meldal, American Carolyn Bertozzi and her compatriot Barry Sharpless, who achieved the feat of winning the second Nobel… 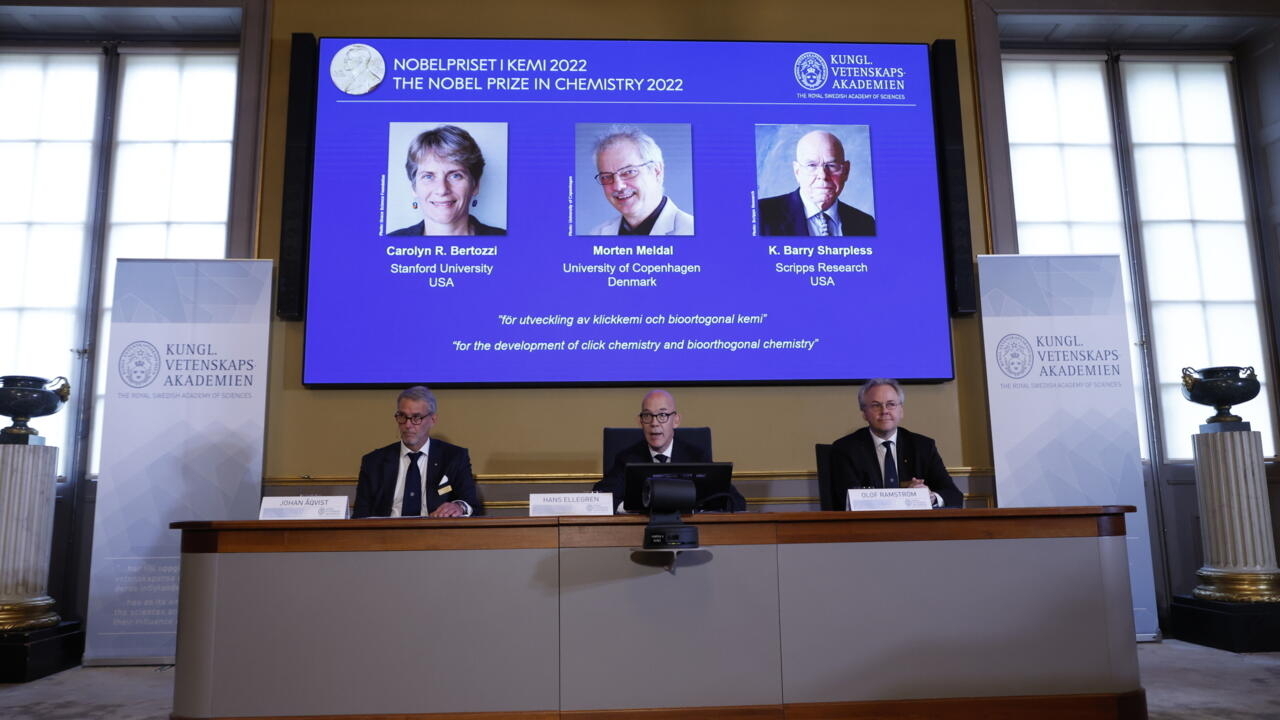 The 2022 Nobel Prize in Chemistry was awarded, this Wednesday, October 5, to the Americans Carolyn R. Bertozzi and K. Barry Sharpless, as well as to the Dane Morten Meldal.

The 2022 Nobel Prize in Chemistry was awarded on Wednesday to Dane Morten Meldal, American Carolyn Bertozzi and her compatriot Barry Sharpless, who achieved the feat of winning the second Nobel of his career.

The trio is rewarded “

for the development of “

”, the jury announced on Wednesday October 5 in its decision.

American researcher Barry Sharpless based in California and 58-year-old Dane Morten Meldal of the University of Copenhagen are recognized for their pioneering work in "click chemistry", a new form of combining molecules.

This is used in particular to develop pharmaceutical treatments, map DNA or create new materials.

Barry Sharpless, 81, is only the fifth person to win a Nobel twice.

He had already won the chemistry prize in 2001 for his discoveries on the technique of asymmetric catalysis.

The American Carolyn Bertozzi, 55, is sacred for the invention of bioorthogonal chemistry, a chemical reaction described as being able to be initiated in a living organism, but without disturbing or changing its chemical nature.

The Royal Swedish Academy of Sciences has decided to award the 2022 #NobelPrize in Chemistry to Carolyn R. Bertozzi, Morten Meldal and K. Barry Sharpless “for the development of click chemistry and bioorthogonal chemistry.”

Cited among the favorites this year, his discoveries have notably opened up avenues for improving the effectiveness of cancer treatments.

In science, the Nobel committees had opened the ball with the awarding of the Nobel Prize in Medicine or Physiology on Monday to the Swede Svante Pääbo, father of Denisova's man and discoverer of the DNA of the Neanderthal man.

On Tuesday, the Franco-Austro-American trio made up of Alain Aspect, Anton Zeilinger and John Clauser, pioneers of the revolutionary mechanism of "quantum entanglement" received the Nobel Prize in Physics.

The prize is endowed with 10 million Swedish crowns (approximately 920,000 euros) in each discipline, possibly to be shared in the event of co-winners.

The week continues with the Nobel Prize for Literature on Thursday and the Nobel Peace Prize, awarded in Oslo.

The Nobel prize giving ends next Monday with the Nobel Prize in Economics.