Lebanon.. A deputy in Parliament sits in a bank to demand her deposit

A deputy in the Lebanese Parliament protested yesterday, inside a bank near Beirut, demanding the recovery of her outstanding funds, so that she could pay the cost of an operation. 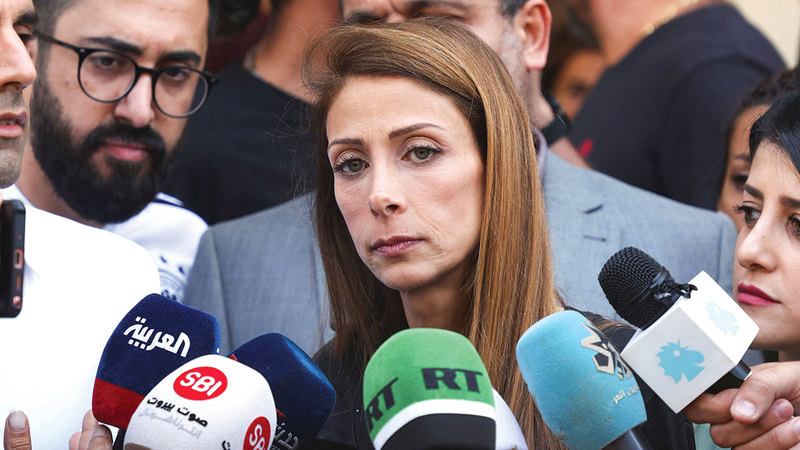 Lebanon.. A deputy in Parliament sits in a bank to demand her deposit

Lebanese MP Cynthia Zarazer speaks to reporters after she ended her sit-in at the bank.

A deputy in the Lebanese Parliament protested yesterday inside a bank near Beirut, demanding the recovery of her suspended money, so that she could pay the cost of an operation.

The move of Representative Cynthia Zarazer, one of the representatives who recently entered the House of Representatives, came from the midst of demonstrations opposing the traditional authority, in the wake of new incursions by depositors to banks, demanding their money in a country suffering from a suffocating economic crisis.

Several people gathered in front of Byblos Bank in the Antelias area, north of Beirut, in solidarity with Zarazir, who was accompanied by two lawyers belonging to a group concerned with the rights of depositors, and accompanied their movements.

Lawyer Fouad al-Dibs told AFP that Zarazir had been waiting for three days to get an appointment from the bank to no avail, so she went to him, accompanied by al-Dibs and another lawyer, at nine o'clock in the morning.

He explained that Zarazir demands $8,500 for an operation that she must undergo, and the insurance company does not cover the full cost of it.

Since the fall of 2019, Lebanese banks have imposed strict restrictions on deposit withdrawals, which have increased little by little, until it has become almost impossible for depositors to dispose of their money, especially those deposited in US dollars, or transfer it abroad.

On the other hand, a fire broke out in a camp for displaced Syrians in eastern Lebanon yesterday, which led to the burning of 93 tents, and the displacement of 100 families.

A force of the Lebanese army, civil defense elements, local authorities and the people worked to put out a fire that broke out in the Omani Al-Wafa camp for the displaced Syrians, in Wadi Al-Hosn, east of the town of Arsal, in the Bekaa Valley in the east of the country.

The damage was limited to material, as the contents of the tents that were affected by the fire were destroyed by the fire, which numbered 93 out of 200, including the identity papers of the displaced, and displaced about 100 families.