Kyiv and the West options after Moscow annexed 4 Ukrainian regions

Russia officially announced the annexation of four Ukrainian regions: (Donetsk, Luhansk, Zaporizhia and Kherson) on September 30, 2022, to which Kyiv responded, on the same day, through the sudden announcement by Ukrainian President Volodymyr Zelensky of his urgent application for NATO membership. (The 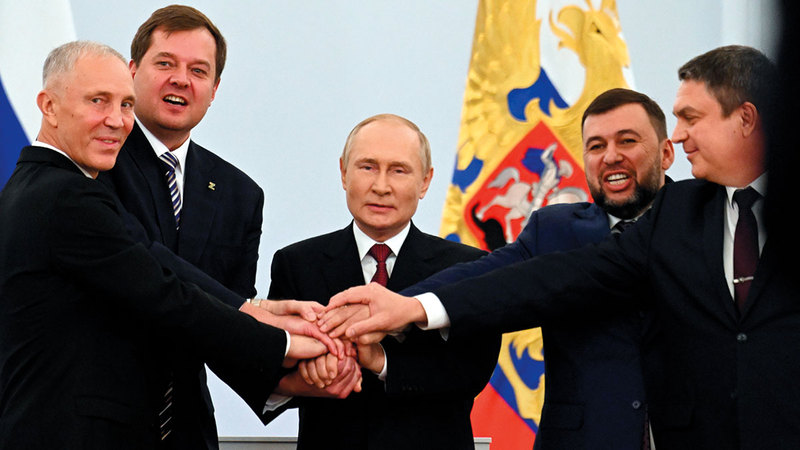 The factors and mechanisms of escalation continue

Kyiv and the West options after Moscow annexed 4 Ukrainian regions

Russia officially announced the annexation of four Ukrainian regions: (Donetsk, Luhansk, Zaporizhia and Kherson) on September 30, 2022, to which Kyiv responded, on the same day, through the sudden announcement by Ukrainian President Volodymyr Zelensky of his urgent application for NATO membership. (NATO), with the exception of talks with Russian President Vladimir Putin, as long as the latter remains in power.

How Kyiv responded to Russia's annexation of four Ukrainian regions can be explained in the following points:

It is noted that the Ukrainian President, Zelensky, intended by announcing an application to join NATO, to anger Moscow, and spoil its celebrations of annexing the four Ukrainian regions, especially since it is clear that Zelensky did not consult with the United States on this matter.

US officials indicated that Kyiv's announcement of its quest to join NATO was a surprise to the Biden administration, as well as the assertion by US National Security Adviser, Jake Sullivan, that Ukraine's accession procedures came at the wrong time, stressing that the best way to support Ukraine It is the continuation of practical support on the ground, in reference to the continuation of providing military support.

It is noted that Washington has not changed its position on the Ukrainian war, which is that it will not enter into a “third world war” against Russia, which will be a “nuclear war” that will cause the world to perish.

There is no doubt that Ukraine's accession to NATO will mean that the alliance countries will be forced to intervene militarily against Russia in defense of Ukraine, and therefore the chances of Kyiv's acceptance into NATO will be difficult.

It is noted that the US Congress has announced the approval of new military support for Ukraine, worth about $12.3 billion.

And Kyiv's announcement of its request to join NATO may accelerate European support for Ukraine.

3- Ukrainian progress in the strategic city of Lyman

Ukraine succeeded in responding to the Russian move by annexing the four regions, by regaining control of the strategic city of Lyman on October 2, 2022, which the Ukrainian forces made continuous efforts to control starting last September;

Through this, Ukraine seeks to defy Moscow, and stresses that Russian threats to use nuclear weapons to defend its new territories will not prevent Ukraine from continuing the fight to restore it militarily, ignoring Russian threats, which is an embarrassment to it.

The United States and the West announced a number of measures in response to Moscow's annexation of Ukrainian lands, as follows:

1- Washington’s attempt to mobilize the international community against Moscow:

On September 30, 2022, Washington presented to the UN Security Council a draft resolution condemning Moscow's annexation of Ukrainian regions, as it called on all other countries and organizations "not to recognize the false annexation" of the four regions.

It is noted that the United States has issued a previous decision that if a member state of the Security Council abuses the veto, the matter is referred to the United Nations General Assembly to take a decision, a decision that does not have a binding status.

This means that Washington will seek to mobilize the international community against Russia and try to pressure the largest number of countries to vote on the aforementioned resolution in the United Nations General Assembly.

However, the new sanctions excluded energy and food, and they are related to imposing sanctions on Russian officials or their families, and therefore their effectiveness appears to be limited, and may not affect the Russian economy or its ability to finance the Ukrainian war.

And there is no evidence of the limited impact of these sanctions, the rise of the Russian currency (the ruble) against its European and American counterparts.

One Western option to respond to Russia is to increase the level of military support for Ukraine.

It is clear that there is a limit to this Western support, which was evident in the German position that refused to supply Kyiv with the "Leopard 2" tanks, which Kyiv had requested, as German Chancellor Olaf Scholz confirmed, in late September, that Berlin did not intend to supply Kyiv tanks, as it may represent a step that leads to further escalation.

While Bloomberg Agency indicated that Western countries are reluctant to supply Kyiv with tanks, which means that there may be a desire to avoid military escalation with Russia.

It is possible that NATO may resort to increasing military support to Ukraine and supplying it with tanks that it requests, in response to Russia's annexation of the four Ukrainian regions.

The West may move to supply Ukraine with air defense systems, as German Defense Minister Christine Lambrecht pledged, during a secret visit to Odessa, on October 1, 2022, to provide Kyiv with air defense systems "Iris-T", the system that deals with targets flying over Low altitudes and flying from close distances, especially drones.

The Public Relations Center of the Federal Security Service reported that Russian intelligence agents managed to thwart an attempt to blow up a gas pipeline planned by Ukrainian intelligence on September 22.

This came before the bombings, on September 26, of the North Stream 1 and 2 pipelines, extending from Russia to Germany across the bottom of the Baltic Sea.

Despite Western officials' attempt to unofficially imply that Russia was involved in these bombings, Moscow, on the other hand, believes that it will not sabotage its own gas pipelines, and Russian intelligence thwarted a Ukrainian attempt to blow up the TurkStream pipeline a few years ago. Days means that Kyiv may be involved in that attack.

For his part, Putin openly accused the "Anglo-Saxons" of being behind the bombings of the "Nord Stream 1 and 2" pipelines, in reference to the United States and Britain.

Before announcing the annexation of the four Ukrainian regions, and specifically since the referendums were announced, Russia had hinted that it might use nuclear weapons, in addition to its announcement of the partial military mobilization of about 300,000 Russian soldiers, which means Moscow's insistence on achieving its goals from the Ukraine war, And confronting any Western escalation directed against it.

This can be explained as follows:

1- Threat to use nuclear weapons

Russia, after officially declaring the annexation of the four Ukrainian regions, continued to assert that it might use nuclear weapons to defend them.

It is noted that the Russian military doctrine issued from 2014 to 2020, confirmed the possibility of using tactical nuclear weapons in conventional battles, according to some conditions, most notably if the territorial integrity of Russia is threatened.

After Moscow announced the annexation of Ukrainian lands, it would have cut the line of reversal from giving it up in any way, and it had opened the door to the possibility of employing nuclear weapons to defend it.

In his annexation speech, Putin hinted that Washington had set the precedent for the use of nuclear weapons in World War II against Hiroshima and Nagasaki, with an implicit threat that they could be used in Ukraine, if the latter continued to attack Russian territory.

There is no doubt that Moscow's actual use of nuclear weapons will put the West in a severe predicament, especially as it may not have the ability to keep pace with Russia in this escalation, or to respond to it militarily, despite the US threat of "catastrophic consequences."

2- Increasing the number of troops involved in the Ukrainian war

Russia announced a partial military mobilization, with the aim of sending an additional 300,000 Russian soldiers to Ukraine, which would raise the number of Russian forces there from about 200,000 to 500,000.

It is noted that the significant increase in the number of Russian forces in this war raises the question about Moscow’s goals in this regard, and whether its goals are limited to completing control of the territories of Donetsk, Zaporozhye, and Kherson, or are there goals beyond that, and Russia may open a new front of war, Whether against the capital Kyiv or the Odessa region.

It can be said that the developments of recent events indicate the continuation of the escalation in the Russian-Ukrainian war, especially with the two sides practically excluding any diplomatic options for a settlement, in addition to the Ukrainian side’s reliance on restoring the lands that joined Russia militarily, and Moscow brandishing nuclear weapons in defense of it.

While the United States has threatened Russia with catastrophic consequences if it uses nuclear weapons, the former will be keen to avoid any military option, so as not to lead to a nuclear war between the two superpowers that exterminates humanity.

Moreover, economic sanctions against Russia have reached their maximum, at least until the end of this year and the beginning of next year, which means that such consequences will not have catastrophic effects, as Washington hopes.

Ukraine's accession to NATO will mean that allied countries will be forced to intervene militarily against Russia in defense of Ukraine, and therefore the chances of Kyiv's acceptance into NATO will be difficult.