Ayuso's 'number two', on the controversy of deaths in residences in the pandemic: "Families have already overcome it"

The number two of Isabel Díaz Ayuso, the Minister of Education, Enrique Ossorio, has unleashed the controversy this Wednesday after a comment on the controversy of the deaths... 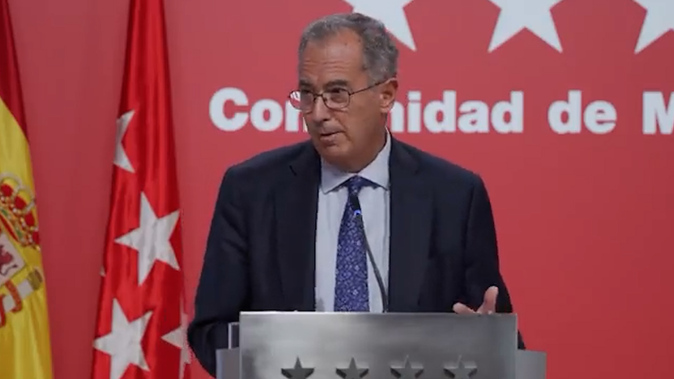 of Isabel Díaz Ayuso, the Minister of Education,

Specifically, he has pointed out that

families "I think they have already overcome it"

His words have provoked the outrage of relatives and some political formations.

Ossorio has made these statements at the press conference of the Governing Council of the Community of Madrid, one day after Vox surprised the PP by facilitating a vote in the Madrid Assembly, on October 13,

a study commission about the residences in the region

, where more than 5,000 elderly people died in the first wave of the coronavirus pandemic.

Late this afternoon, Ossorio wrote a tweet to qualify his words.

"Obviously, the death of a loved one is never overcome,

but the lie of the left,

without scruples, which affirmed that it could have been avoided, has been overcome," the counselor has published.

More Madrid has requested this Wednesday

the resignation or the immediate dismissal of Ossorio

Specifically, the party has registered a Non-Law Proposal (PNL) to demand its rejection in plenary session.

Ossorio, who has reproached the Government of Spain for not taking "rapid measures" to deal with the pandemic, has argued that this commission only has

"electoral interest and is going to cause harm to families"

who are going to think again that they are could have prevented the deaths.

"We demand her resignation or immediate dismissal,

there are 7,291 reasons for her not to continue in her position for another day

", they have launched from the party led in the region by Mónica García.

In statements sent to the media, Mónica García believes that the vice president "has crossed all the red lines and the level of immorality in this government has reached its ceiling."

cannot represent the people of Madrid

who not only have not forgotten our elders, but also want to investigate what happened to the end," García defended.