Guinea: the defense speaks at length at the reopening of the September 28 trial

Last week, the trial of the Conakry stadium massacre opened in Guinea on September 28, 2009. On that day, an opposition demonstration against a candidacy by the leader of the junta of… 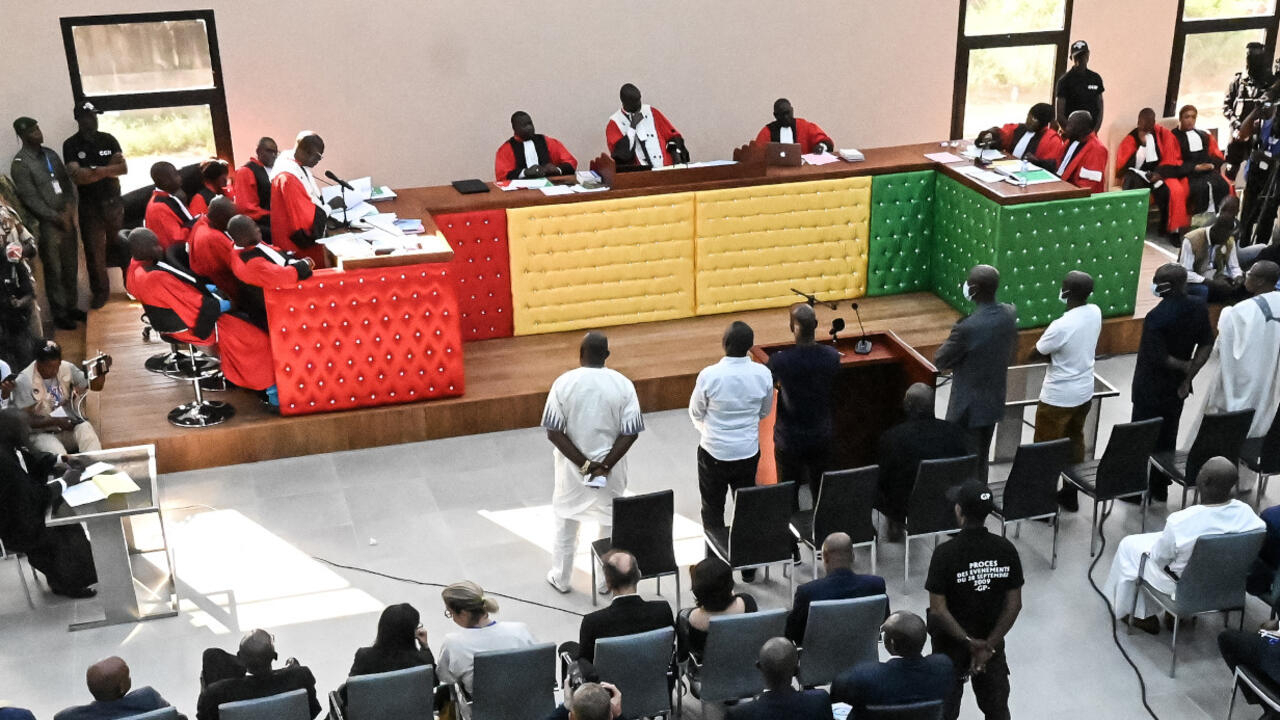 Guinea: the defense speaks at length at the reopening of the September 28 trial

Last week the trial of the Conakry stadium massacre opened in Guinea on September 28, 2009. On that day, an opposition demonstration against a candidacy of the then junta leader, Moussa Dadis Camara , had been bloodily suppressed.

The hearing was adjourned to October 4.

The defense lawyers were the first to speak.

Many seats remained empty at the opening of the hearing this morning around 10:30 a.m. (UT and local time).

This second day of debates should allow progress to be made.

In any case, this is what Asmaou Diallo, the president of Avipa, an association of victims, is asking.

She spoke to the press on Tuesday, saying she hoped there would not be a multiplication of dismissals and calling on the Ministry of Justice to respect its obligations and to

No measures have yet been taken regarding this protection, according to the association.

This morning, identical badges were distributed to civil parties, witnesses, journalists and ordinary members of the public, in order to promote the anonymity of victims in particular.

The hearing continues at this very moment with the defense lawyers speaking.

One after the other, they decided to raise several exceptions likely, according to them, to annul the lawsuits against their clients.

Among the elements of procedure called into question, there is the order for reference.

It dates from 2017. Some of the lawyers point to irregularities.

Still others, whose clients have spent several years in prison, denounce abusive detentions.

Faced with the lawyers' sometimes lengthy arguments, the president showed signs of annoyance several times, asking the lawyers to go straight to the point to raise their objections.

The defense is still speaking out.

She has had the floor for over two hours now.

Two days a week of trial

In the box of the accused, the eleven defendants are all there.

Moussa Dadis Camara, in black and white boubou, the head of the junta at the time of the massacre, should plead not guilty.

This was stated by his lawyer Me Pépé Antoine Lama.

Another defense lawyer, Me Salifou Béavogui, confided this morning to having had discussions with his colleagues from the civil parties.

The two pools of lawyers have reportedly agreed to have the trial held two days a week.

In the room, blue velvet seats have replaced the simple chairs of last week.

The rest of the furniture for the ad hoc tribunal was finally delivered and installed.

For this second day of hearing, many hiccups at the level of the organization again.

The accreditation of journalists, the distribution of the public in the room posed problems.

Everything is not yet ready.

The hearing which was to open at 10 a.m. was half an hour late.