Freezing “Ultra White Knights” in Egypt .. Will it pave the way for a breakthrough for the imprisoned and the return of the masses?

The announcement of the Zamalek Fans Association in Egypt sparked a freeze of its activity; The controversy over its causes, and raised questions about the possibility of considering it a first step to return the fans to the stadiums after years of absence and the release of detainees belonging to the Ultras. 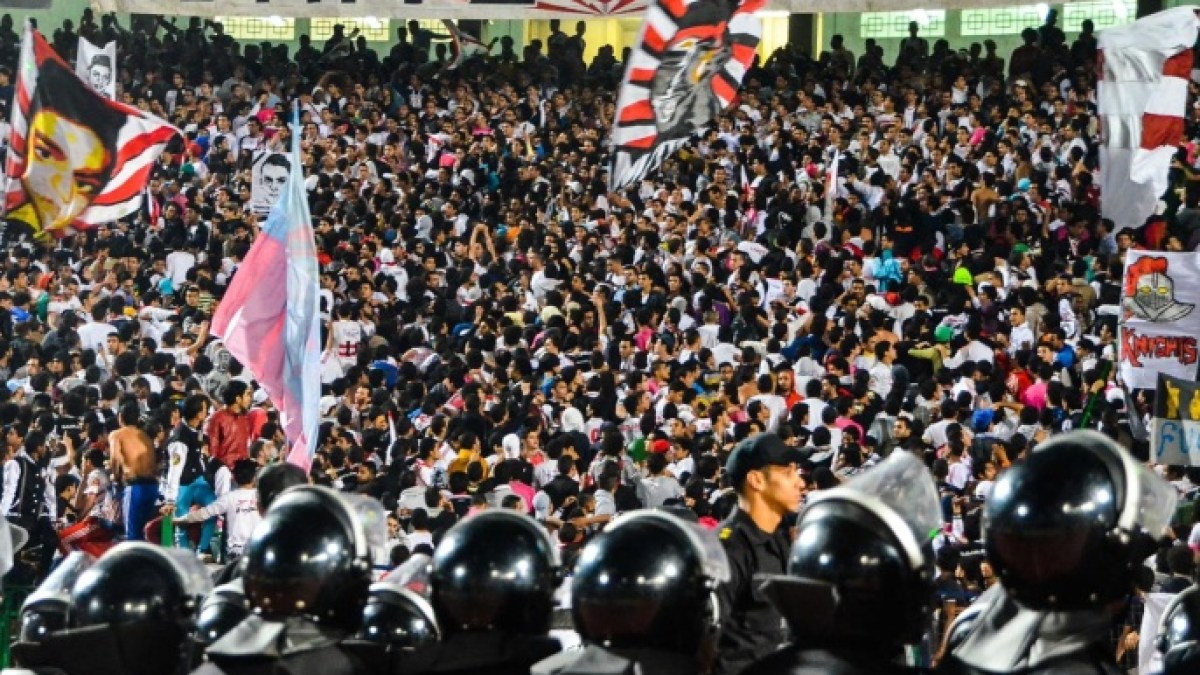 When will football fans return to the stadiums?

A question that preoccupies millions of Egyptians who love the first popular game in the country, which perhaps the security services alone have the ability to answer, because of what they say are security reasons that prevent the return of the masses, amid protests and controversy about the stability of the security situation already for years.

In this context, and in a sudden development of the activity of football fans’ associations in Egypt, the Zamalek Club Supporters Association “Ultra White Knights” announced that it would freeze its activity indefinitely.

Because of what she said were security pressures, and her unwillingness to compromise her principles or denounce the victims from the masses, in exchange for allowing her to return to the stands for cheering.

The relationship of the successive Egyptian authorities - since the January revolution of 2011 - with club ties that first appeared in Egypt in 2007 (the Ultras Clubs of Al-Ahly and Zamalek in particular) is characterized by tension and permanent clash.

The announcement of "White Knights" - which came at a time when the ultras associations do not exercise any actual activity in the stands - raised questions about the reasons why the fans did not return to the stadiums normally;

Despite the stability of the security situation, which was said to have been the reason for preventing the Ultras from attending matches 10 years ago, or is the decision due to the ongoing crises between the leaders of the association with the club’s president, Mortada Mansour, and the continued imprisonment of its founders on political charges?

Ultras links played a prominent role in the January 25, 2011 revolution, and participated in the mobilization against the regime of former President Hosni Mubarak, and in defending the protesters in Tahrir Square, downtown Cairo.

After the overthrow of Mubarak, the activity of the Ultras appeared intermittently, whether in the transitional period managed by the Military Council (February 2011 to June 2012) or the rule of the late President Mohamed Morsi (2012-2013), passing through their activity in commemorating the martyrs in Subsequent years, which put its leaders and members under security prosecution on charges including "riot and terrorism".

The enmity between the clubs’ associations and the authorities reached its climax, after the events known as the “Port Said stadium riot” in the coastal city of Port Said (northeast), in February 2012, which led to a security decision banning fans from attending matches except for the national team matches or the African participation of clubs.

In a match between Al-Ahly and Al-Masry Al-Portsaidi teams, violence took place, killing 74 people, and wounding about a thousand others, in what is described as "the biggest disaster in the history of Egyptian sports."

On February 8, 2015, about 20 Zamalek fans, most of them ultras, were killed in clashes that erupted when security forces prevented the team's supporters from entering the Air Defense Stadium (east of Cairo), to follow the club's match with its rival, Enppi.

While the police denied using bullets or birdshot against crowds of fans, the ultras described what happened as a "massacre", and some accused the club's president, Mortada Mansour, of masterminding it because of his proximity to power.

The tension between the regime and the Ultras did not end, until a judicial decision was issued in mid-2015 to ban these links and consider them "terrorist entities".

In May 2018, Ultras Ahlawy (the most famous club association in Egypt) announced the official dissolution of the association and burning its logo, which is a binding tradition for ultras associations around the world when they announce their dissolution;

For reasons including "to preserve the future of its members."

In a surprising statement, the Ultras White Knights announced the indefinite freezing of its activity, and rejected what it called a "deal to return to the stands" by a dissident group, according to specific conditions, which it considered "betrayal of the martyrs" and a truce with the club's president (Mortada Mansour), which the statement described as "" the killer".

The statement stressed that the association is not linked to a political movement, and that its only mission is to support the club everywhere, denouncing the distortion of the leader of the association, "Sayed Moshaghib", who is currently imprisoned, noting that the latter is facing "false accusations and slanders that were formulated in the security offices."

It is noteworthy that in September 2017, the Cairo Criminal Court issued its verdict against the defendants in the Air Defense Incidents case, with various sentences ranging from life to 10 years in prison, and Mashagheb was sentenced to 7 years in prison.

The association sent a message to those whom it called traveling companions inside the stands from the fans of Al-Ahly (the traditional rival of Zamalek), all fans and groups of popular clubs, and ultras groups in North Africa, in which it confirmed that it will remain far from the hand of power.

In response to the statement, a member of the White Knights Association revealed that there is a split within the association between two groups, the first of which froze the activity according to the announced statement, and the other is less numerous and coordinated with the Zamalek administration in attending the matches, and it no longer has a problem with security.

Speaking to Al-Jazeera Net, the source expected - preferring not to be named - that the stadiums of the Zamalek fans in the coming period would witness a remarkable activity by the splinter White Knights group, despite the announcement of the freeze, ruling out that it would attack the administration and security, or commemorate the memory of the martyrs in the matches, as is followed in the recent years, he said.

ball for the fans

After the state classified the ultras as terrorist groups, in addition to the controls in place for returning to the stadiums again;

The most important of which is to prevent any political tendencies inside the runway.

Speaking to Al-Jazeera Net, Suleiman said that the state with the return of the masses again naturally, considering the football game is the first popular game in the world, and the audience is the main factor in any match, and is the 12th player in it, indicating the need to adhere to security controls, even if he arrived It is due to the absence of public ties, if this is in the interest of public order, he said.

The sports critic accused the ultras of challenging the regime and seeking to return again to the various political trends, the opposition and negative behaviors, stressing that he is not against the idea of ​​the fans criticizing players, administrators or coaches, but that it remains conditioned that it does not come to criticizing the state itself and entering into Politics again.

As for the reasons for the masses not returning to their normal form despite the current security stability, Suleiman explained that there is an official trend to provide security in the stands to reach the ideal civilized image, which the world witnessed during Egypt’s organization of the two African Nations Championships for adults and under 23 years old in 2019.

He pointed out that the gradual return of the stands again in the local matches recently, came in accordance with the security controls established and followed in the "My Ticket" system, which provides the public to attend the matches in peace and without infringement on the system.

He added that there is an official tendency to gradually increase the number of fans after starting with 2,500 fans, until the public understands the security controls that allow it to attend perfectly.

The Egyptian Clubs Association and the Egyptian Football Association, in coordination with the security, are seeking to increase the number of fans in the African championship matches (African Nations qualifiers, the Champions League and Confederation Cup) hosted by Egypt, in addition to the matches of the local Premier League that will be launched in a few days, according to media reports.

A breakthrough for the imprisoned

When asked about the repercussions of the decision to freeze the League on the cases of its leaders and members who are currently imprisoned for riots and violence, lawyer and human rights lawyer Ahmed Madi said that the Public Prosecution recently released a large number of members of the Ultras Leagues, hoping for a breakthrough that includes all the rest, including the leader of the League, Sayed Mashagheb.

Speaking to Al Jazeera Net, Madi hopes that the freezing decision will pave the way for a wide breakthrough, especially since the association has not practiced any actual activity for the ultras for a long time;

For reasons that may be fear of persecution and security harassment, or the presence of leaders and members in prisons.

When asked about the reasons for not fully opening the stadiums to the masses in light of the complete control of the stadiums, he considered it an exclamation point, given the security stability, the development of a special electronic system for booking tickets to attend matches, the inspection of the masses and the prohibition of entering prohibited objects, in addition to monitoring all movements.

On the other hand, fans say that the absence of the ultras links made the matches lose their enjoyment in light of their strong and organized encouragement performance in the stands, which negatively affected the performance of Egyptian clubs and teams in the continental and international tournaments.

Karim El-Sayed, an Al-Ahly fan, cites the negative impact of the Ultras' absence on Egypt's chances of reaching the 2022 World Cup in Qatar. The ticket went to the Senegalese team, after the Ultras were replaced by fans without enthusiasm or a strong performance in the first leg in Cairo.

Speaking to Al Jazeera Net, Al-Sayed pointed out that the performance of the Egyptian Al-Ahly team players was negatively affected by the strong crowd of the Moroccan Wydad Ultras, in the final of the African Champions League in Morocco, and their loss of the continental title months ago, and attributed this to the players not accustomed to playing under strong public pressure.