'Boom' in VET: the number of students enrolled shoots up 45% in a decade and already exceeds one million

The network of private training centers Medac has put some advertisements on Cabify cars that aim to attract young people with this claim: "Do you still... 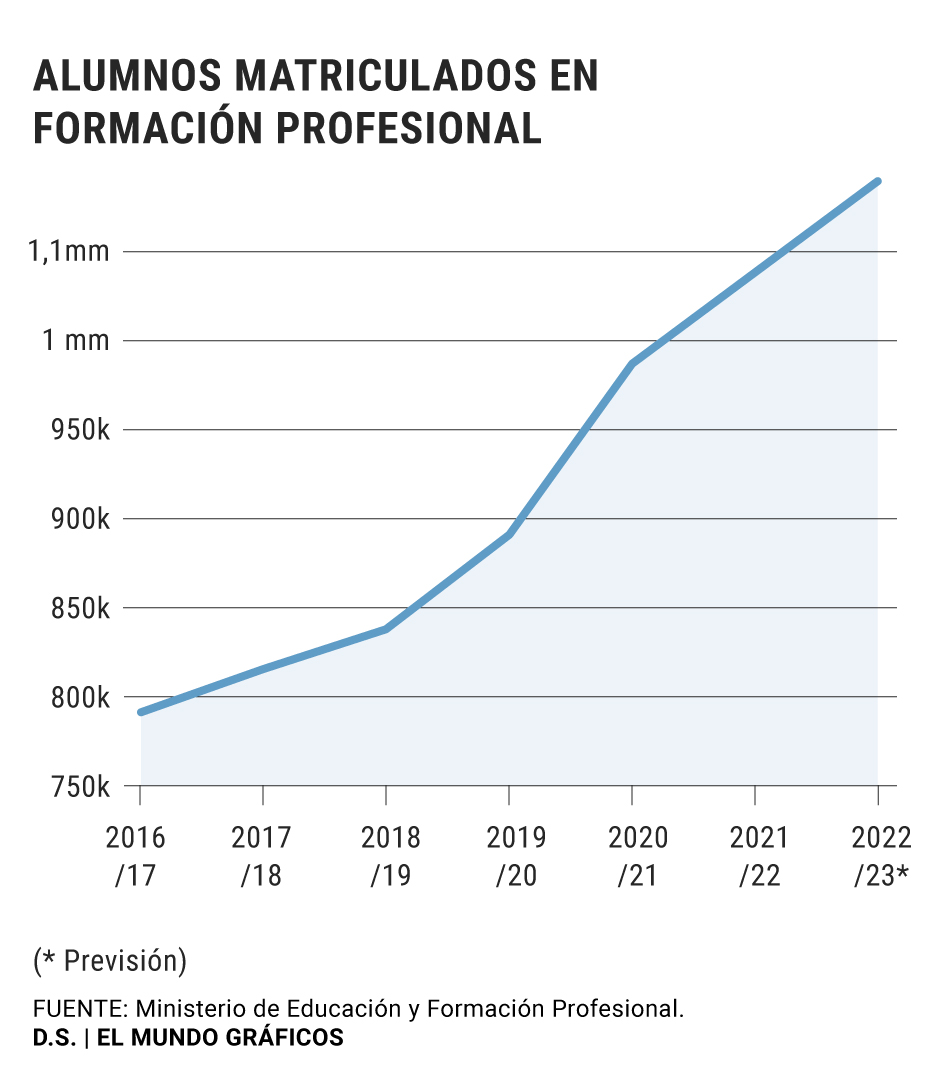 The network of private training centers Medac has put some advertisements on Cabify cars that aim to attract young people with this claim: «Do you still think that VET is for dummies?

The campaign is a reflection of the 'bubble' in which

is submerged , which has seen how the demand multiplied in the last decade.

In the 2013/14 academic year, 791,000 students were registered, a figure that, according to the latest official data, now reaches 1.08 million and represents an

In fact, if the trend of increasing registrations continues like the last four years, it could happen next year.

Santiago García, general secretary of the private employers' association, the

, confirms the existence of a 'boom' that has broken all records in the last academic year and which is explained by the improvement in employability data, the legislative development of the Dual Vocational Training (a model that alternates training in the educational center and the company with paid internships from the first day), the joint work of all the institutional agents, the support that employers have given it, the repeated publicity campaigns of the Ministry of Education and the CCAA and the word of mouth that has been transmitted among the students.

According to the Adecco

, FP has become "the

by Spanish companies, ahead of university degrees."

In total, 36% of the offers published by companies seek candidates with this training

Álvaro Palomino, 22, has found a job at

after completing a two-year higher cycle

at the Andel de Alcorcón private school (Madrid): "Many people told me to study Engineering, but I wanted studies that were closer to the reality of work and not so focused on Mathematics, which I have never been good at," he says.

After finishing high school, he considered studying a university degree: "Psychology caught my attention a bit and

However, he recognizes that his passion was Computer Science and the degree he studied finally fit his needs perfectly.

at the Catholic University of Valencia after accessing through a medium degree and then a higher degree.

"She didn't do well in high school, because she was too theory-based and didn't catch my interest," she admits.

So, she opted for this path because she "could get to the same place" studying something more specialized and attached to what she wanted to dedicate herself to.

was a way to redirect my future,"

Public administrations have been working in recent years to improve the quality of VET teaching.

So much so that, in 2018, the Ministry of Education, Culture and Sports was renamed

the Ministry of Education and Vocational Training

to "value this educational modality".

The Ministry has slightly increased this year a budget under the slogan "2022, the year of the new Vocational Training".

In the case of Germany, the average is 12 points higher or Italy, which exceeds 50% of students enrolled, according to 2020 data from Eurostat.

The ranking is led by Serbia or Slovenia, which reach 70%.

In fact, Spain is the eighth country with the lowest rate of students enrolled in intermediate and higher level vocational training, with 37%.

In the case of Germany and Switzerland, the average is 12 and 26 percentage points higher.

In Italy, more than 50% of students are enrolled, according to 2020 data from Eurostat.

The ranking is led by Serbia or Slovenia, which reach 70%.

THE PRIVATE, ON THE RISE

, although in the latter the increase is more pronounced.

Public centers are the ones that have grown the most in basic grades, 21%;

and private centers, in higher grades (72%).

The increase in demand and the insufficiency of public resources have caused many students to resort to private centers.

García points out that this situation falls within

"It is important that public administrations set out long-term visions, outside of electoral cycles," she pointed out in the presentation of a CaixaBank study.

The professional families where there are more enrollments are

According to official data, the

of five higher-level degrees with the most enrollments account for 32% of the student body: Administration and Finance, Early Childhood Education, Teaching and Socio-sports Animation, Development of Multiplatform Applications and Social Integration.

Meanwhile, in the middle grades, the five most studied represent 49% and include Administrative Management, Auxiliary Nursing Care, Microcomputer Systems and Networks, Electromechanics of Motor Vehicles and Care for People in Dependency Situations.

profile of a Vocational Training student

is that of a 19-year-old man, who is studying a higher degree in Administration and Finance in person, at a public center in Barcelona.