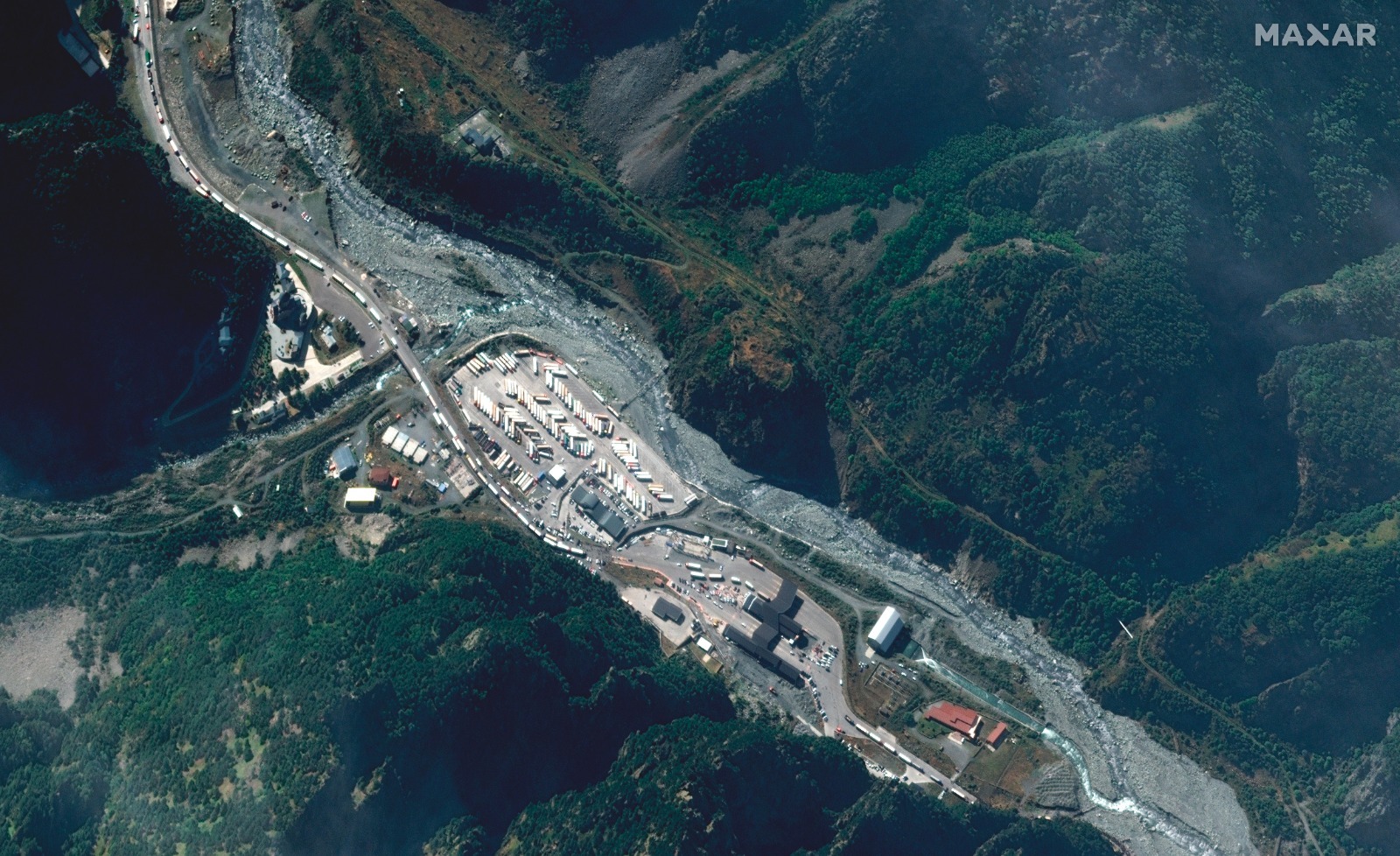 , according to a statement published on the website of the diplomatic legation.

"United States citizens should not travel to Russia and those residing in or traveling (now) to Russia should leave the country immediately while there are limited business travel options," the note said.

has already opened a mobilization center at the Verjni Lars border crossing in North Ossetia, the only one between that country and Georgia, and has begun issuing summonses to men on a list to be sent to fight in the

, according to the TASS agency today.

it does not give any legitimacy

to the "fictitious results" announced by Russia.

"Spain strongly condemns the illegal mock voting organized in Ukraine," said the Ministry of Foreign Affairs, referring to the referendums organized in the

of "any action or decision that may be taken by the Russian authorities aimed at the illegal annexation of said territories ".

) has reported today of a weekly increase of 30% in the entry of Russians into the territory of the community bloc, presumably attributable to the partial mobilization ordered by Moscow.

According to the agency's data, 66,000 Russian nationals arrived in the EU last week, most of them through the border crossings of Finland and Estonia.

Especially significant is the case of Finland, a country to which 30,000 citizens of the Russian Federation have arrived in the last four days.

The Frontex document indicates that, since the war in Ukraine began, more than 1,303,000 people with Russian passports have entered the EU by land transport, of which 1,273,000 returned to their country.

Russia will stop issuing passports to those

mobilized by the army

, the government information portal reported on Wednesday as tens of thousands of people have already fled abroad.

"If a citizen has already been called up for military service or has received a summons (for mobilization or conscription), he will be denied an international passport," says the information portal.

would be "political suicide" and has said she fears the use of nuclear weapons from the start. territory of your country.

Thus, he describes as "farce" Moscow's annexationist "referendums" in four occupied Ukrainian regions, whose objective is to present the Russians with "a victory" when "the Kremlin's blitzkrieg has failed."

Everyone has seen that the Kremlin army is not as powerful as they say, the king is naked, no normal country will recognize these votes," he said on the sidelines of the British Labor Party conference in Liverpool, in the north-west of the country.

The United States asks its citizens to leave Russia "immediately"

The Embassy of the United States in Russia has asked its citizens to leave this country "immediately", according to a statement published on the website of the diplomatic legation.

"United States citizens should not travel to Russia and those residing in or traveling (now) to Russia should leave the country immediately while there are limited business travel options," the note said.

The statement recalls that on September 21 the Russian authorities declared a partial military mobilization to reinforce their forces deployed in Ukraine.

"Russia could refuse to recognize the US citizenship of dual nationals, prevent them from accessing US consular assistance, prohibit their departure from Russia, and call up dual passport holders," the statement said.

The Kremlin on Wednesday described as "stupid and absurd" to accuse Russia of being behind the leaks detected in the Nord Stream gas pipelines caused by explosions under the sea.

"It was quite predictable" that some would blame Russia, Kremlin spokesman Dmitri Peskov said.

"Predictable, stupid and absurd," he added, assuring that the leaks from the Nord Stream 1 and 2 gas pipelines are "problematic" for Moscow because the Russian gas that escapes "costs a lot of money."

Both infrastructures were damaged by underwater explosions off a Danish island in the Baltic Sea, causing a major boil.

Inspection of the two

gas pipelines deliberately damaged by underwater explosions off a Danish island in the Baltic Sea will not be possible for another week or two, the Danish defense minister said on Wednesday.

Due to the extensive boiling caused by the three gas leaks, "it can easily take a week or two before the area is quiet enough to see what has happened," Morten Bødskov told Danish media on the sidelines. of a meeting with the Secretary General of NATO in Brussels.

"It's a very big explosion that has happened, so it will be a while before we can go down," the minister said of the pipes, which are about 80 meters deep.

The Georgian Foreign Ministry today condemned the illegal referendums held by Russia in the Ukrainian regions of Donetsk, Lugansk, Kherson and Zaporizhia.

"This is an inadmissible attempt to annex Ukraine's territories," Georgian diplomacy said in a statement posted on Twitter.

According to Tbilisi, "Georgia firmly supports the sovereignty and territorial integrity of Ukraine."

The referendums in the Ukrainian regions occupied by Russia were extended for five days for security reasons and passed without a ceasefire in between, so the fighting continued between the Ukrainian Army, the Russian troops and their allies, the separatist militias.

in the temporarily occupied Ukrainian territories, which it described as "yet another crime", and to increase isolation and pressure on Russia and support for Ukraine.

"Ukraine calls on all states and international organizations to immediately condemn the illegal actions of the Kremlin in the temporarily occupied territories of Ukraine and to increase the isolation of Russia," the Ukrainian Foreign Ministry said in a statement.

At the same time, he calls on the EU, NATO and the G7 "to immediately and significantly increase pressure on Russia", including with "new and tough sanctions", as well as military aid to Ukraine.

The Russian Ministry of Defense

announced the official start of the

"All the mobilized soldiers carry out shooting practices with light weapons. In addition, the citizens called from the reserves reinforce their knowledge of exploitation and service of weapons and military and special equipment," Defense said in a statement.

has already opened a mobilization center at the Verjni Lars border crossing in North Ossetia, the only one between that country and Georgia, and has begun issuing summonses to men on a list to be sent to fight in the

The Polish Army will give

and survival training sessions from next Saturday to civilians between 18 and 65 years of age who request it.

The training will last a single day and will include notions of shooting and handling weapons, self-defense, survival and orientation.

Any male of Polish nationality will be able to access these courses at the facilities of the 17 Polish military commands, in which they are taught to light a fire with sticks, purify water, provide first aid or orient themselves by the sun or the stars.

According to a statement from the Polish Ministry of Defense, those who decide to register will receive food and will be insured against possible accidents.

The operator of the

gas pipeline indicated today that everything suggests that "physical damage" has occurred in the Baltic Sea in the energy infrastructure, and assured that it has begun to mobilize all the necessary resources to study the causes of the incident.

"The significant drop in pressure caused by the gas leak in both threads of the Nord Stream gas pipeline recorded on Monday, leads to a strong assumption that physical damage has been caused," Nord Stream AG said in a statement, with headquarters in Switzerland.

The gas pipeline operator assured that "the mobilization of all necessary resources to assess the damage has begun in cooperation with the relevant local authorities" in Denmark and Sweden.

The pope has once again asked for prayers for the "martyred"

, "which is suffering so much", and explained that the Polish Cardinal Konrad Krajewski has informed him on his return from the country "of the terrible things" that are happening there.

"My thoughts go to the martyred Ukraine, which is suffering so much, and to that poor people so cruelly beaten," he said in a new message of support at the end of the general audience held in St. Peter's Square.

Francis explained that this morning he was able to speak with the pontifical almoner, the person in charge of the pope's charitable works, Cardinal Krajewski, who has just arrived from his fourth trip to Ukraine to bring essential goods.

Turkey to give up Russian Mir payment system

The three state banks in Turkey that allowed the Russian Mir payment system will abandon it after warnings from the United States, a senior Turkish official told AFP on Wednesday.

"There are ongoing payments, but a future date has been set" for the suspension of the Mir system, the source told AFP on condition of anonymity and without specifying a date.

Two of the country's largest private banks, Denizbank and Isbank, had already announced last week that they were suspending the use of the Mir payment system.

Between 87.05 and 99.23% of voters in the so-called referendums in the territories controlled by Russian forces in eastern and southern Ukraine supported the annexation to Russia, according to the results released this Wednesday by the pro-Russian authorities with one hundred percent of the ballots counted.

In the self-proclaimed republic of Donetsk, 99.23% of voters supported joining Russia and participation was 97.51% of the census, according to data from the local electoral commission cited by the Interfax agency.

Support for annexation was slightly lower in the also self-proclaimed republic of Lugansk, where 98.42% were in favor of this option and the turnout was 94.15%, announced the local electoral authorities, who never revealed how he drew up the census in the midst of the Russian war intervention.

, currently the main supplier of gas in Europe, will reinforce security around its oil facilities, as announced after the alleged "sabotage" of the Nord Stream gas pipelines in the Baltic Sea.

"The government decided to implement measures to increase the safety of infrastructure, shore terminals and facilities on the Norwegian continental shelf," Energy Minister Terje Aasland said in a statement Tuesday night.

This announcement comes after mysterious leaks preceded by explosions that affected the Nord Stream 1 and 2 gas pipelines and after recent drone observations around the Nordic oil platforms.

cannot negotiate with Russia after the organization of annexation "referendums" in four Ukrainian regions that already announced on Tuesday night that the "yes" vote had won with a large majority.

This has been assured by the Ukrainian president, Volodimir Zelenski, to the UN, when more than seven months have passed since the

"Russia's recognition of pseudo-referendums as 'normal', the application of the same plan as in Crimea, is a new attempt to annex a part of Ukrainian territory, which means that we will not negotiate with the current Russian president," he said. Zelensky in a recorded video released during a UN Security Council meeting.