The EU launches an eighth round of sanctions on Russia: a cap on oil and a ban on Europeans on the boards of its public companies

The President of the European Commission, Ursula von der Leyen, and the High Representative for Foreign Policy, Josep Borrell, announced this Thursday the general lines of the... 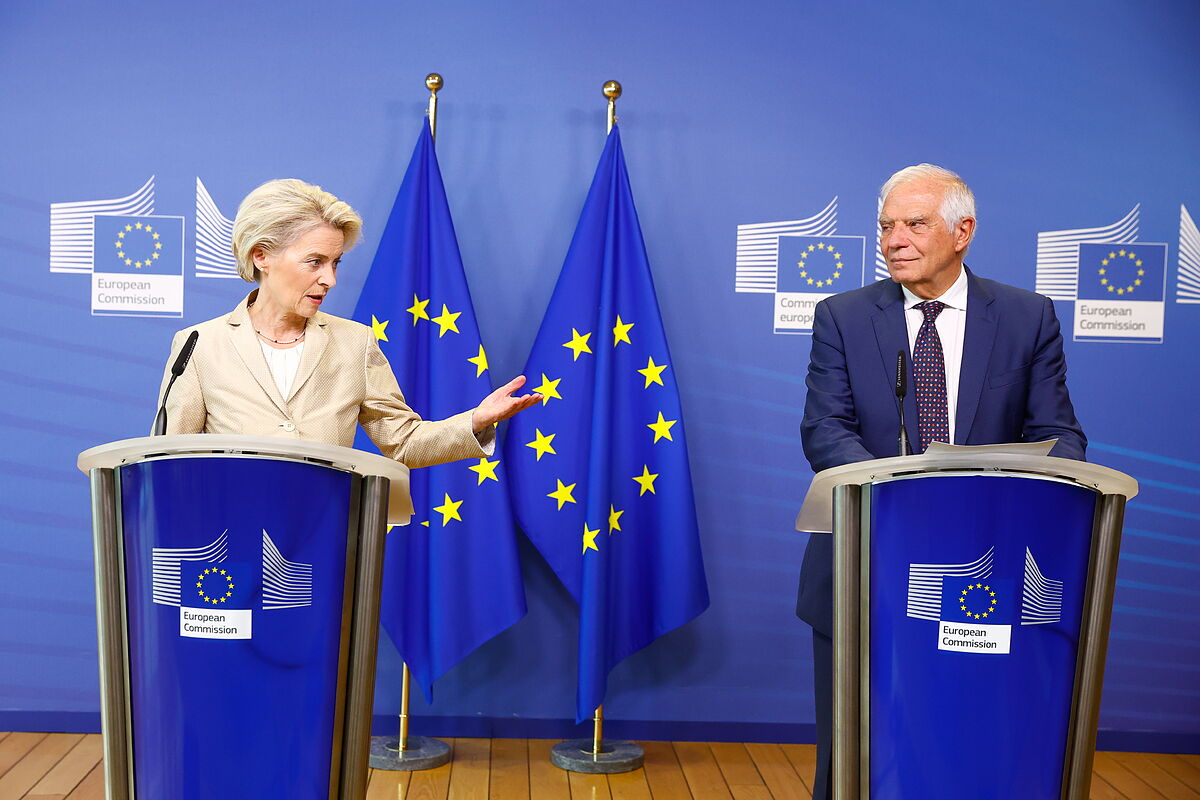 , announced this Thursday the general lines of the

eighth package of sanctions against Russia

for the invasion of Ukraine.

The objective continues to be

"weakening the Russian economy" and "making those responsible pay"

, and responds directly to the

celebration of the "referendums of shame"

carried out these days in the occupied territories, they have pointed out.

The sanctions will further reduce exports of European technology, services and chemicals.

It brings up to 1,300 the list of individuals and companies punished for participating in the invasion and the "referendums of shame" and will try to impose, as the G7 has agreed, a

maximum cap on the price at which Russia sells its oil, but it will not to the EU, but to developing countries

There are no names or surnames, but there is no doubt that this measure, this legislation, if it goes through, will be forever associated with former German Chancellor

"They will not benefit from our knowledge," said Von der Leyen.

Ukraine dismantles the legacy of the USSR: the meter of Lenin's statue is paid at 18 euros

Ukraine dismantles the legacy of the USSR: the meter of Lenin's statue is paid at 18 euros

Living and dying in Donbas

Living and dying in Donbas

As always in the Union,

the Commission proposes, but then it is the member states that decide

The proposals will now be analyzed by the ambassadors of the 27, the so-called Coreper, and then will go to the Council of Foreign Ministers, which is in charge of sanctions.

Hungary's, that are against more sanctions

and, in fact, are openly calling for all of them to be lifted immediately to fight energy prices and inflation in general, so

unanimity is going to be very difficult to achieve

The heads of state and government will meet next week in Prague, at an informal summit, and there they will discuss the issue and Orbán will be able to explain to his partners

Russian sanctions, which, he says, "were decided by Brussels bureaucrats", despite the fact that he himself ratified them.

"The shameful referendum called by Russia is an illegal attempt to forcibly change international borders. The

is one more step in the escalation. We will never accept the referendum of shame and any annexation determined to make the Kremlin pay We want to further isolate the Russian economy and the ban on the entry of more products will deprive Russia of billions of euros in revenue We also propose to expand the list of products that cannot be exported in order to

technologies such as aviation elements, electronic components and chemical substances. This will weaken their economy and their ability to organize," Von der Leyen assured in a brief appearance without questions before the media.

One of the most controversial elements is the cap on the price of Russian gas, but not the price that the EU will pay for its purchases, but rather the price that is sold in other parts of the world.

The 27 have already agreed on a schedule, from December onwards, to

, but now they are pointing to those going to other parts of the world.

"Russia is using the

profits from fossil fuels to finance the war

. We already have an agreement in place to dispense with oil that will arrive by sea since December, but some developing countries need Russian supplies. The G7 has reached an agreement in principle to put a limit on oil for third parties. That cap will reduce their income and, in addition, keep the market stable. Today, in this package, we develop the legal bases for that cap", added the Commission President.

The announcement is, for now, political.

The ambassadors will discuss the texts, make modifications, study the legal bases, and, if there is a certain consensus, the Commission, with that information, will make the formal proposal, which will have to be definitively validated by the capitals.

Von der Leyen's team does not want to give details yet about the products that this extended round will cover, or names and surnames, or

Or what consequences would there be for those who do not respect it.

will be communicated in the coming days or weeks

Borrell, who coordinates the foreign ministers, who are the ones who have sanction powers in the EU, has said that those responsible for the occupation of specific areas will be added to the European black list (freezing of assets and prohibition of entry) , those responsible for organizing and

executing a farce referendum in the occupied zones

, senior defense officials, "those who help the Army obtain weapons, equipment, missiles and planes" and those responsible for the mobilization to

to send to war, as well as those who "spread disinformation and false news and donate funds to the occupied areas", expanding the geographical scope beyond Donbas.