In response to the annexation referendums, a European call for "harsh" sanctions against Russia and Kiev threatens the "traitors" cooperating with the Russians

European Commission President Ursula von der Leyen proposed today, Wednesday, the imposition of a new “tough” package of sanctions against Russia, due to the annexation referendums organized by the pro-Moscow authorities in 4 Ukrainian regions. 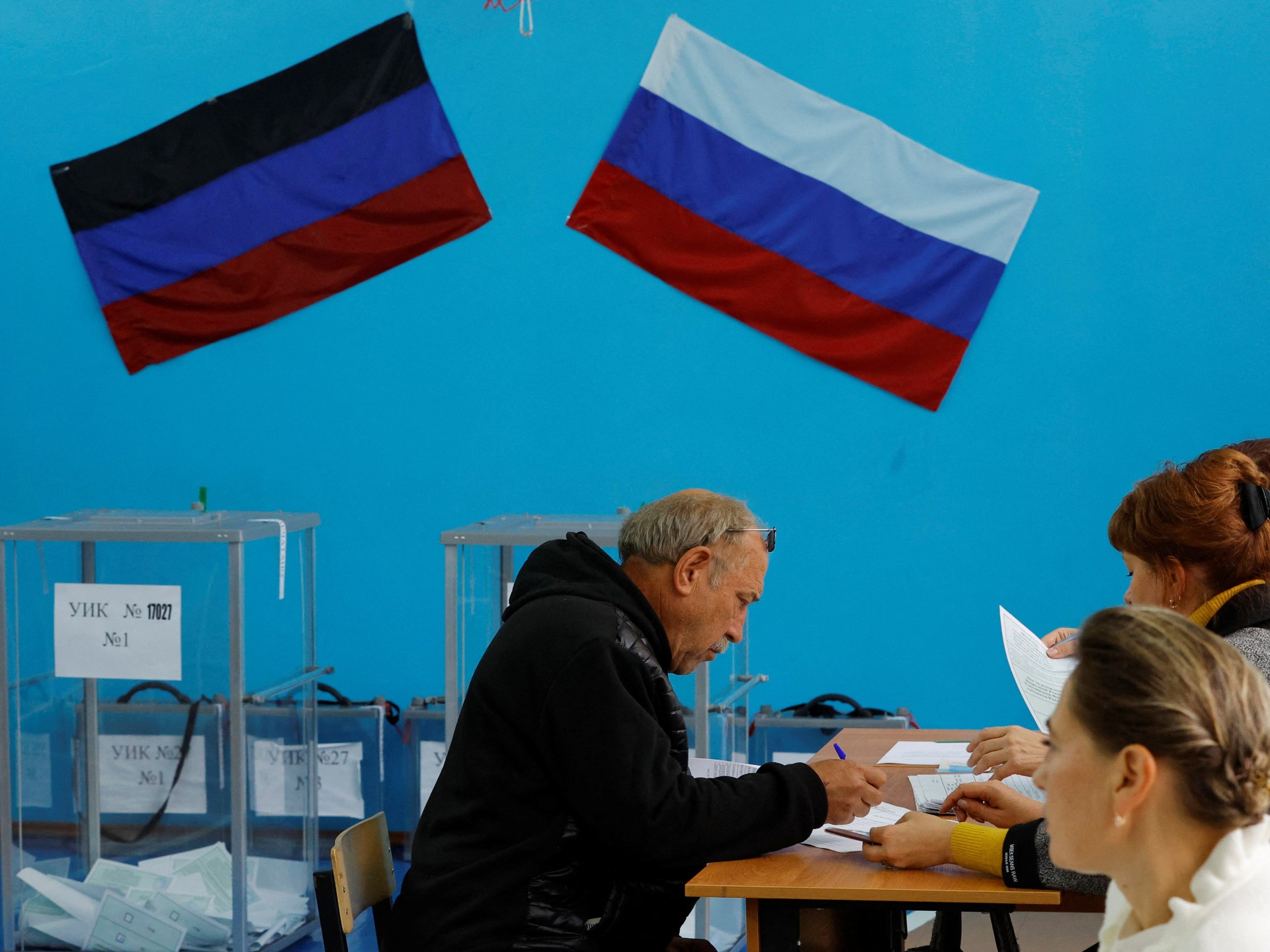 Today, Wednesday, European Commission President Ursula von der Leyen proposed imposing a new "severe" package of sanctions against Russia, due to the annexation referendums organized by the pro-Moscow authorities in 4 Ukrainian regions, which, according to the Russian version, supported the option of secession from Kyiv.

The pro-Russian authorities in the regions of Zaporozhye, Kherson, Lugansk and Donetsk announced the victory of supporters of annexation to Russia, explaining that they are in the process of submitting official requests to Moscow to accept it in the Russian Federation, and said that voters voted for the secession option by 98.4% in Lugansk, and 93.1% in Zaporozhye, with a percentage of 87% in Kherson, and 99.2% in Donetsk.

Von der Leyen noted that the new sanctions would include more trade restrictions, blacklisting of individuals, and a ceiling on Russian oil prices.

"We do not accept sham referendums, nor any form of annexation in Ukraine. We are determined that the Kremlin will pay the price for this further escalation... We are proposing a new package of harsh sanctions against Russia," she told reporters.

Germany also announced its refusal to accept the announced results of the annexation referendums, and a German government spokesman said that Chancellor Olaf Scholz told Ukrainian President Volodymyr Zelensky - during a phone call today, Wednesday - that Berlin would never accept the results of "sham" referendums in the occupied areas of Ukraine.

In turn, the Ukrainian Foreign Ministry said that it will punish all citizens of Ukraine who participated in the organization of the so-called "referendum" with what it described as "the Russian occupiers" with a fair penalty, in accordance with the provisions of the Ukrainian Criminal Code, stressing that they will face penalties based on accusations of "treason".

It was also denounced by NATO Secretary General Jens Stoltenberg, describing them as "sham referendums" that constitute a "blatant violation of international law".

On the other hand, the Russian Foreign Ministry said that measures will be taken soon to meet the aspirations of the four regions, to become part of Russia, just one day after the completion of the referendums.

Moscow had welcomed the vote of the four Ukrainian regions in favor of the option to join, and in a message via the Telegram application, the former Russian President and current Deputy Chairman of the National Security Council Dmitry Medvedev said, "The referendums are over, the results are clear. Welcome to your homeland, in Russia!"

Russian President Vladimir Putin said on Tuesday that the vote was aimed at protecting people from what he called Ukraine's persecution of Russians and Russian speakers.

"Rescuing the people in all the lands where these referendums are being held is our top priority and the focus of our society and country as a whole," he added.

Putin is expected to ratify the accession applications at a later time, after which he can consider any attempt by Ukraine to regain control of these areas an attack on Russian territory, knowing that he said - earlier - that he is ready to use nuclear weapons to defend his country's "territorial integrity" .

On the ground, the leader of the separatists in the pro-Russian Donetsk region, Denis Pushilin, said that they will move to a new stage of military operations after their accession to Russia.

The Russian Defense Ministry also announced that its forces had killed more than 150 Ukrainian soldiers with strikes on the Kharkiv province.

For its part, the Ukrainian army announced that its air defense units had shot down 3 "cruise" missiles fired by the Russian forces on the cities of Odessa and Kryvyi Rih.

In Kharkiv province, Al-Jazeera correspondent reported that several explosions rocked the city on Tuesday evening, and that fires broke out in two locations after the explosions.

The governor of Kharkiv Province said that the Russian bombing targeted the city's infrastructure facilities with several missiles, some of which were intercepted by the Ukrainian anti-aircraft.

In the Donbass region, the pro-Russian forces in the Donetsk region announced that the Ukrainian army intensified its bombing of the neighborhoods of the city of Donetsk, hours after the results of the referendum on joining Russia were announced.

The Defense Department - affiliated with the pro-Russian Donetsk forces - confirmed that a hotel where journalists were staying was subjected to Ukrainian artillery shelling, without causing casualties, and that neighborhoods in the center and east of the city were also bombed.

The governor of the Russian region of Belgorod bordering Ukraine, Vyacheslav Gladkov, announced that at least 14 people were injured - today, Wednesday - in an explosion of ammunition in the region, noting that the explosion occurred as a result of "human error."