The UN is "very concerned" about the repression in Iran

The United Nations has expressed concern about a situation that, although it has subsided slightly in recent days, the Iranian security forces have dealt with... 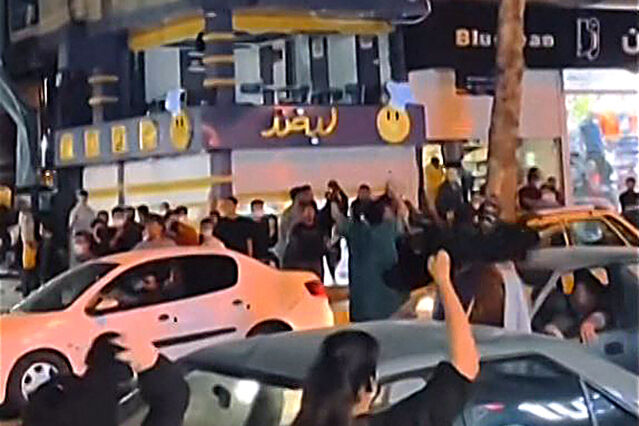 The United Nations has expressed concern about a situation that, although it has subsided slightly in recent days,

the Iranian security forces have dealt with lethal methods

This Tuesday, the spokeswoman for the UN High Commissioner for Human Rights, Ravina Shamdasani, stated that reports indicate that "hundreds" have been arrested, "including human rights defenders, civil society activists and at least 18 journalists." ".

The Internet cuts decreed by the system

are an obstacle to knowing exactly the magnitude of the protests.

According to official sources, 41 people have died since the beginning.

Iran Human Rights, an entity based in Oslo,

puts the figure at 76

In recent hours, Tehran, Tabriz, Karaj, Yaz and Qom, a city known as the Shiite Vatican and the de facto seat of clerical power, have registered violent charges against protesters and clashes between riot police and some participants.

In a statement, Shamdasani urged the Iranian authorities to "fully respect freedom of opinion, expression, and association and peaceful assembly."

In recent days, peaceful protests led by women have alternated between

with laws such as the mandatory veil, and serious disturbances, in which the lives of women have allegedly ended. at least five agents.

"Thousands have joined the anti-government demonstrations throughout the country during the last eleven days. The security forces have sometimes responded using live ammunition," highlighted the message from the UN, the latest institution to show "very concerned" about what happened in Iran following the death of

The young woman suffered a blackout two weeks ago at the police station from which she did not recover.

She had been arrested for violating dress code.

Police deny he hit her before her.

has ordered an investigation

into the causes of death.

But the deep distrust that a significant portion of society feels towards its elites, after years of accumulating reparations, fueled the fury in the streets.

Without openly acknowledging the symptoms behind the outrage, the system has used the most destructive actions of the argument participants to blame everyone as "troublemakers", blame them for acting remotely from the outside and order heavy-handed.

This Tuesday, the Judiciary announced the establishment of special courts to judge the facts.

At the same time, the Tasnim agency, close to the Islamic Revolutionary Guard Corps, reported that its intelligence had "identified and arrested two organized groups of rioters in the northern province of Gilan."

According to the media, the two groups of twelve people

Faced with these denunciations by the Iranian government,

points to an excess of zeal towards the demonstrators.

"The rising death toll is an alarming indication of how ruthless the authorities' attack on human life has been in the darkness of the internet shutdown," said Heba Morayef, Amnesty's Middle East director.

The Iranian government has responded to any criticism of its response by accusing actors like the EU of having double standards.

After Brussels warned on Monday that it was considering imposing sanctions on Iran for the repression of the protests, the Iranian deputy foreign minister,

, to the protest head of the delegation that tries to revive the nuclear agreement, threw in the face of the EU the effect of years of US sanctions.

The basic question, he wrote in a trill, is how the EU "can be concerned about the human rights situation in Iran" while "refusing to provide medicines and bandages required to alleviate the endless suffering and pain of the butterfly children, and cause the death of these innocent children.