The DNA tests carried out on the body found in the Toledo town of Casarrubios del Monte a week ago have confirmed that it is Isabel del Castillo, the sick... 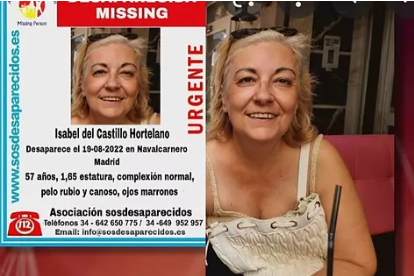 carried out on the body found in the Toledo town of

a week ago have confirmed that it is

who disappeared in Navalcarnero in August

, the Civil Guard reported on Tuesday.

in a rural area

between the municipality's aerodrome and the Calypo Fado urbanization, less than 10 kilometers from the last trail left by Isabel.

The neighbor of Navalcarnero

was captured by a city council video surveillance camera

when she was walking towards a roundabout located at one of the exits of the town, for which a large fence of land located in the direction towards which Isabel was heading at that time was beaten numerous times by family, neighbors and volunteers for over a month.

In addition, the Civil Guard coordinated on the 6th a device in which

participated to find the whereabouts of the neighbor of Navalcarnero, a pioneering deployment with the use of the Alertcops application.

that is handled is that Isabel became disoriented due to the illness she suffered from and died a few hours after having wandered through rural roads.