The director general of former Japanese Prime Minister Shinzo Abe was observed in Tokyo today. The funeral for the family of former Prime Minister Abe, who was killed in the shooting in July, has already been held, and the funeral was held in 80 days, and 4,300 people, including major foreign nationals, attended. 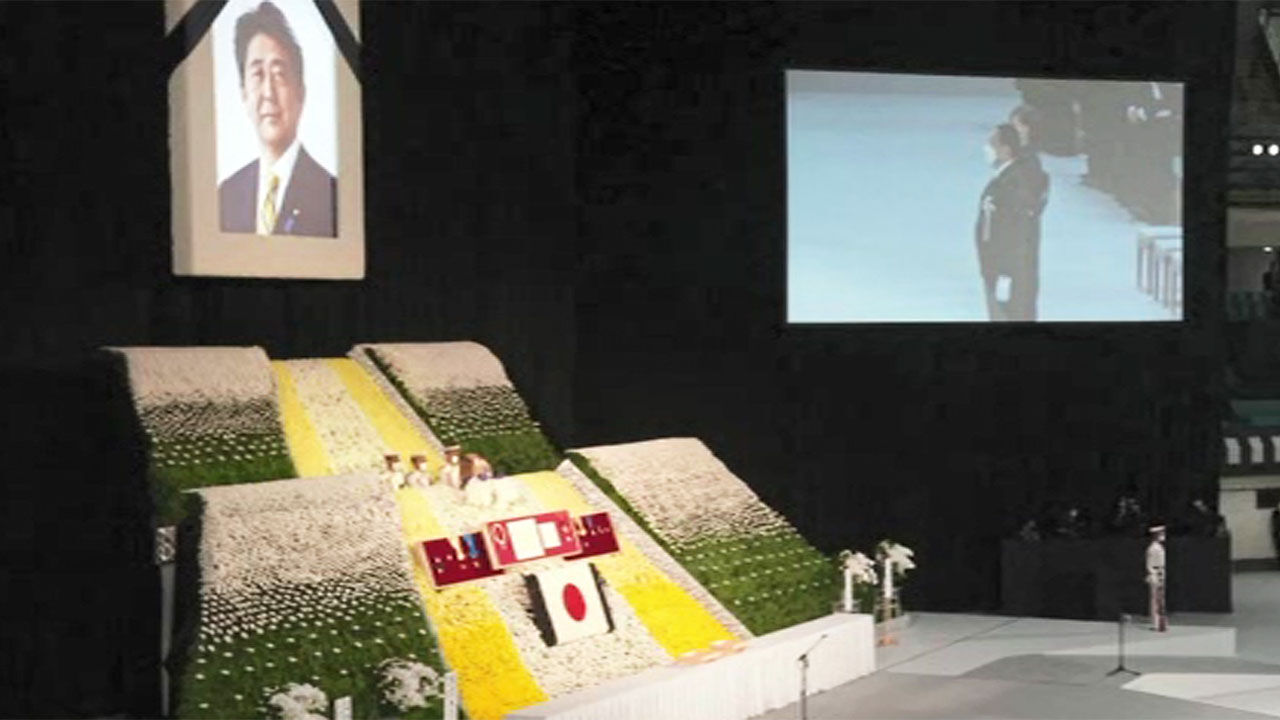 The funeral for the family of former Prime Minister Abe, who was killed in a gunshot in July, has already been held, and the funeral was held in 80 days, and 4,300 people, including major foreign nationals, attended.

Correspondent Park Sang-jin, let me start by telling you how the head of state was held today.

Yes, former Prime Minister Shinzo Abe was held at the Japanese Budokan where I am now from 2pm today.

The director was followed by a national anthem, silence, and a tribute to Prime Minister Kishida, who served as the funeral director.

After that, a memorial service was held by former Prime Minister Suga and others, and the flowers of domestic and foreign figures were finally finished.

Earlier, the ashes of former Prime Minister Abe were moved from his home to his funeral home.

A separate citizen flower stand was also installed near the event site.

It is the first time in 55 years since former Prime Minister Yoshida Yoshida in 1967 that a head of state was held for a former prime minister in Japan.

At the time of the death of former Prime Minister Abe, the failure of security became a problem, but today 20,000 police officers were deployed to exercise strict vigilance.

Police officers were also deployed at major subway stations, including Tokyo Station, ahead of the director general, and an explosive search was conducted at the airport.

The Metropolitan Expressway, an arterial road in downtown Tokyo, and the road near the event site were closed until this evening.

director was held, there were many voices against this in Japan, right?

Yes, on the same day as the director general, there was a very high public opinion against the director, as rallies were held in various places such as in front of the Japanese National Assembly.

Opposition figures, including the leader of the first opposition party, did not attend the head of the country at all.

[Citizens against the head of state: The process of deciding the director is strange, and considering what former Prime Minister Abe has done so far, I do not think I can support the director.]

Citizens who oppose the director have mixed opinions on Abe's political achievements pointed out.

We also believe that there is no legal basis for the Cabinet to decide on a national event that requires more than 16 billion won in taxes from our own money without discussing it with the National Assembly.

A recent opinion poll showed that 56% to 62% of the director disagreed, but compared to last July and August, it increased from 10%p to 13%p.

On the 21st, a man in his 70s tried to self-immolate, saying he was against the director.

With this director, Prime Minister Kishida will meet with his guests from overseas one after another, right?

Yes, Prime Minister Kishida plans to hold talks with representatives of 40 countries in a row until tomorrow.

The calculation is to raise the approval rating that has fallen through so-called condolence diplomacy.

Vice President Harris is the highest-ranking member of the United States, and none of the leaders of the seven major countries have come.

Former Presidents Trump and Obama, who were originally expected to come, did not attend, and in Europe, former presidents of both France and Germany attended.

Of the 4,300 people in attendance, about 700 are foreign government officials or foreign ambassadors in Japan.

Prime Minister Kishida is scheduled to meet with Prime Minister Han Deok-soo, who has been dispatched as the head of the Korean condolences team, tomorrow morning.