Diplomat author and analyst Mercy Koo interviewed Dr. Joel Wathno, Senior Research Fellow at the Center for the Study of Chinese Military Affairs at the University of Notre Dame's Institute for National Strategic Studies, who is the author of Crossing the Strait: China's Military Preparations for 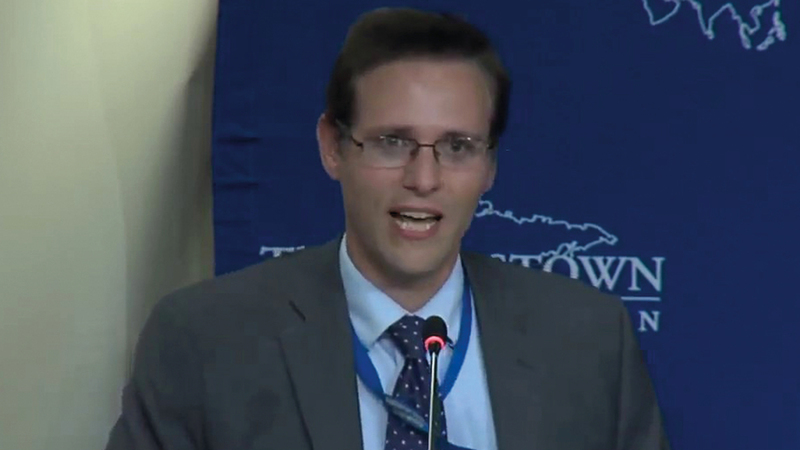 Diplomat author and analyst Mercy Koo interviewed Dr. Joel Wathno, Senior Research Fellow at the Center for the Study of Chinese Military Affairs at the University of Notre Dame's Institute for National Strategic Studies, who is the author of Crossing the Strait: China's Military Preparations for War with Taiwan.

In this interview, Wathno spoke about the theory of "peace" followed by the United States to change the status quo in Taiwan, the strengths and weaknesses of the Taiwanese and Chinese side, and the US government's reliance on popular support in the event of any intervention. The following are excerpts from that interview:

■ What is your assessment of the "US" factor in Beijing's calculations, in the event of any military conflict over Taiwan?

■■ The "US factor" can be seen in both directions in the calculus of China.

China does not view these US steps, such as House Speaker Nancy Pelosi's recent visit to Taiwan, as something isolated, but as part of a "salami-slicing" strategy, a strategy of gradually getting rid of an opponent piece by piece, to change the status quo.

Beijing believes it needs to step up its steps to prevent this, which it has been doing in several ways since early August.

While Chinese leaders are clearly disturbed by the actions of the United States and are preparing to respond, they are also concerned about the consequences of the war, because the economic cost of US and international sanctions will be huge, and threaten the grand agenda of Chinese President Xi Jinping, the larger, of national revival. .

■ How do you evaluate the ongoing modernization of the Chinese People's Liberation Army, and their impact on preparations for a possible war?

■■ There is no doubt that China is improving the equipment it needs to conduct military operations against Taiwan, whether it is retaking the island with large-scale operations or less, such as blockade or missile bombing.

The Chinese military could also use field systems, reaching much further into the western Pacific, to threaten any U.S. troop presence there.

Finally, Xi Jinping introduced reforms to the basic systems that make these capabilities work effectively, such as command and control;

and mobilization, and even professional military training and education to build the human capital that China needs to be able to plan and lead joint operations.

However, there are some lingering weaknesses.

The People's Liberation Army still lacks a viable plan to move troops and equipment across the strait of the necessary scale.

There are persistent human capital problems.

But all this will not be intractable, and it will take a long time to solve.

■ What are the strengths and weaknesses of Taiwan's comprehensive defense concept?

■■ Taiwan's "comprehensive defense concept" is to try to reorient its defense away from expensive weapons and platforms, such as destroyers, tanks, and asymmetric systems, that are likely to be more useful in defeating a Chinese invasion.

One problem is that Taiwan still needs modern, traditional systems to meet its day-to-day national defense responsibilities, because Chinese raids into the airspace and waters around Taiwan are becoming more frequent.

■ What is your assessment of US military capabilities, political will, and general support in any potential cross-Strait conflict?

■■ The US military is highly capable in any anticipated conflict over Taiwan, but it also needs to adapt to the challenges posed by China.

China has modernized the work in the "no access/no-go" environment.

Many war games were conducted to assess how the battles were developing, and to make improvements.

Officially, the administration of US President Joe Biden has reaffirmed the policy of "strategic ambiguity" about what it will do in any cross-Strait conflict.

Some members of Congress and presidential hopefuls have called for this policy to be abandoned to deter China, although some analysts believe that a shift toward "strategic clarity" would bring all sides closer to war.

• China is working to improve the equipment it needs to carry out military operations against Taiwan, whether it is retaking the island with large-scale operations or less, such as blockade or missile bombing.