Russian-controlled areas in eastern and southern Ukraine continued to vote for their annexation to Russia, for the second day in a row, yesterday. 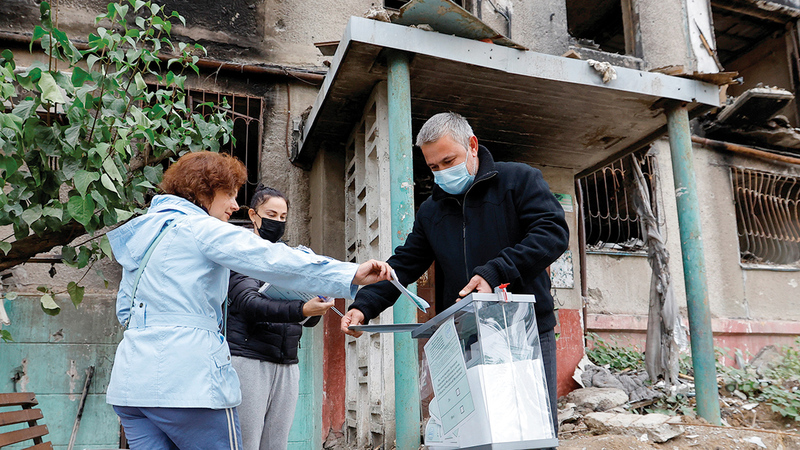 Organizers are collecting votes from homes.. and voting is available in Moscow

A woman casts her vote at a mobile ballot box in Donetsk region.

Russian-controlled areas in eastern and southern Ukraine continued to vote for its annexation to Russia, for the second day in a row yesterday. Referendums are being held in Donetsk and Luhansk regions in the east, and Kherson and Zaporizhia in the south. Some referendum organizers in these regions move from house to house to collect the votes of the population.

The polling stations will open, the day after tomorrow, so that residents who did not turn in their ballot papers can vote on the last day, and can also vote in a building in Moscow representing the Donetsk region.

In the Donetsk and Luhansk regions, whose independence Russia has recognized, residents will be asked to answer whether they support the accession of their republic to Russia, according to TASS.

Yesterday, Putin signed amendments stipulating a prison sentence of up to 10 years for military personnel who deserted or refused to fight during the mobilization period.

The British Ministry of Defense said in its daily bulletin yesterday that Russia bombed the Bshinhi Dam on the Seversky Donets River in northeastern Ukraine, using short-range ballistic missiles or similar weapons.

The ministry said the attack followed an earlier attack on the Karachonevsky Dam on the Kryvyi Rih River in central Ukraine, adding that Ukrainian forces were advancing towards the mouth of the two rivers.

The leader of Chechnya, Ramzan Kadyrov, described the Russians who do not want to participate in the war on Ukraine as "nothing but cowards."

Kadyrov said on his Telegram account that the reasons for refusing to fight, such as opposition to the war or Russia's political leadership, are just justifications.

Kadyrov emphasized that Chechnya would not participate in the mobilization, but said that many volunteer units from the Russian Republic had already gone to the front.

"Chechnya will not participate in the mobilization, and units of volunteers went to the front."