One of those accused of beating several women who had rejected them in a restaurant in the Chinese city of Tangshan last June, and which caused a wave of... 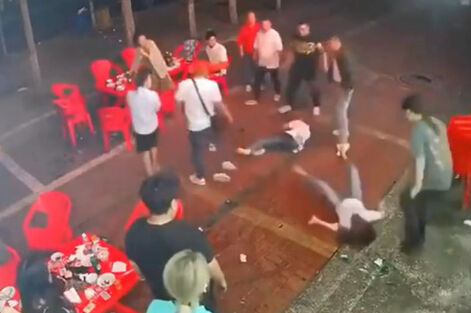 One of those accused of

who had rejected them in a restaurant in the Chinese city of Tangshan last June, and which caused a wave of outrage in the Asian giant,

has been sentenced to 24 years in prison.

In June, four women dining at a restaurant in Tangshan

were brutally assaulted by a group of men

after one of her diners turned away one of them, who approached her and touched her without her consent.

A group of men then began to beat her and another woman who was in the restaurant,

dragged them outside the premises and continued the beating

, which included kicking when the victims were lying on the ground.

The assailants also attacked two other women who were in the vicinity.

As a result of the injuries,

two women had to be hospitalized

, local media reported at the time.

video of the attack

, captured by the security cameras of the premises, went viral in the following hours on Chinese social networks such as the equivalent of Twitter, Weibo, where the labels ('hashtags') related to the case accumulated hundreds of millions of visits.

aggression put women in the country on a war footing

, especially in large cities, where demands for self-defense classes skyrocketed.

Violence against women and girls is a

serious violation of human rights and the right of women

to live without violence is recognized in international agreements.

Worldwide, only 40% of women seek help after suffering violence, which forces institutions to promote prevention and help policies.