Pelosi's visit to Armenia brought him back to the fore.. The Caucasus conflict is one of the aspects of the deep dispute between Turkey and America

US House Speaker Nancy Pelosi's recent visit to Armenia was criticized by Turkey, as a step that does not contribute to peace with Azerbaijan, revealing the depth of the crisis in Turkish-US relations. 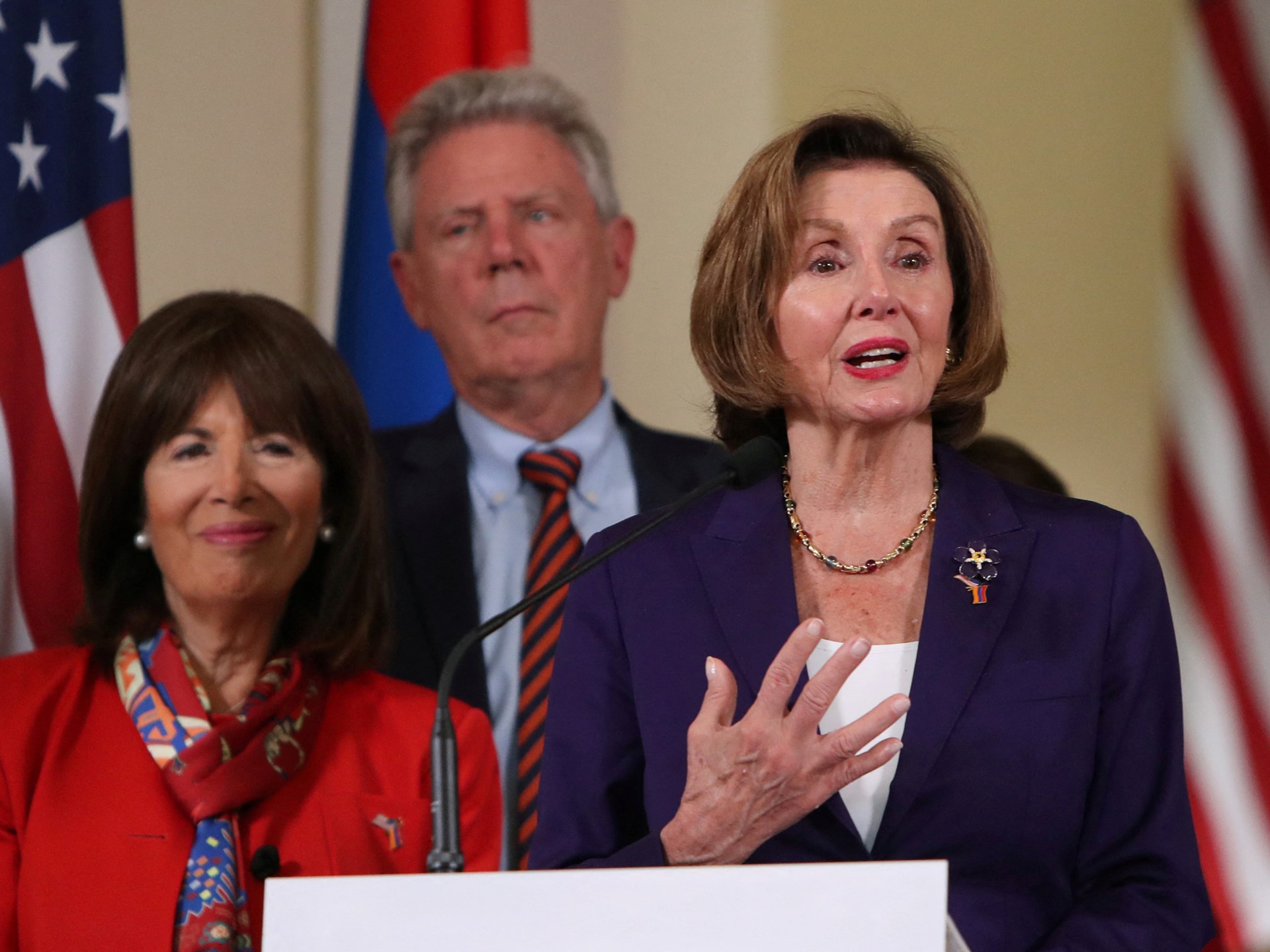 Almost two years have passed since the signing of a ceasefire agreement between Azerbaijan and Armenia, which ended a large-scale war between the two sides that resulted in thousands of deaths, and Baku regained large parts of the territory of the disputed Karabakh region with Yerevan.

However, the situation on the border between the two countries has since witnessed renewed clashes from time to time, the last and most serious of which was about two weeks ago.

While the recent clashes led to the death of about 200 soldiers on both sides of the border, the two sides exchanged accusations of causing these clashes, which is repeated after each round of escalation on the border between the two countries.

This round ended with a cease-fire declared by Russia, which Armenia attributed the credit for reaching the United States.

While the Turkish position in absolute support for Azerbaijan did not witness any change, as Turkish President Recep Tayyip Erdogan demanded that Armenia stop its provocations against its neighbor and abide by the 2020 agreement that ended the war at the time, the United States showed greater support for the position of Yerevan, as it demanded a ceasefire, noting " A dispute between the two parties over the Nagorno-Karabakh region,” which was criticized by Baku, with a note that the region belongs to it by virtue of international law.

The US position was not limited to a statement that annoyed Azerbaijan. Last Sunday, US House Speaker Nancy Pelosi made a "controversial" visit to Armenia, during which she accused Azerbaijan of igniting the recent clashes, considering that it threatens "the possibility of reaching a peace agreement."

She also stressed that "Armenia is of special importance to us."

During her 3-day visit, during which a ceremony was placed at a memorial to the victims of the 1915 events, which Yerevan describes as genocide and accuses the Ottoman Empire of committing, Pelosi said, "In Congress, we hold Turkey and Azerbaijan responsible for the conflict over Nagorno-Karabakh."

The US position on the Nagorno-Karabakh conflict seems more biased than before, at least officially to the Armenian side, but it was not always consistent, as it has gone through many twists and turns according to Washington's changing interests in the region.

The writer specializing in the affairs of the former Soviet republics, Basil Hajj Jassem, believes that the US position towards Nagorno-Karabakh in the late eighties, before the collapse of the Soviet Union, "had a lot of ambiguity and Washington's unwillingness to go into details."

Speaking to Al-Jazeera Net, Haj Jassem adds that Washington was keen, through its old position, "not to disturb Turkey, a member state of NATO, which was seen as a spearhead against the eastern camp on the one hand, and on the other hand it was keen not to provoke the powerful Armenian lobby." in the United States".

He explains that after the collapse of the Soviet Union, Washington began to view Armenia as a potential ally in the region, and Congress passed a ban on military aid to Azerbaijan and other resolutions to support Armenia, and this continued until the mid-1990s.

But after US companies were allowed to participate in the development of energy sectors in the Caspian Sea, the US position began to change towards Azerbaijan, and after 2001, with America's war on terrorism, Baku occupied a key position among Washington's allies, according to the spokesman.

The fluctuating American position on the conflict in the Caucasus region changed again during and after the 2020 war between Azerbaijan and Armenia, with more emphasis on condemning Turkey’s contributions in support of Baku militarily and politically, especially after the prominent role of the Turkish marches in inflicting a clear defeat on the Armenian army, which resulted in progress A large field for the Azerbaijani forces in the Karabakh region, which was recognized by Yerevan in the cease-fire agreement.

There were voices in the United States during the 2020 war calling for the imposition of sanctions on Turkey because of its support for Azerbaijan, in conjunction with the US Department of Defense threatening Ankara with sanctions against the background of a test conducted by the Turkish armed forces of the Russian S-400 defense system.

Months later, in April 2021, US President Joe Biden announced his recognition that the Armenians had been subjected to a "genocide" at the hands of the Ottoman Empire in 1915, which angered Turkey.

The writer specializing in regional affairs, Basil Hajj Jassim, believes that the recent American approach to Armenia came “within the framework of pressure on Turkey, and is not related to the Turkish-Armenian relations as much as it is related to the American-Turkish differences, which exacerbated after 2011, in the context of the Syrian war and Washington’s support for the Syrian expansion.” The Kurdistan Workers’ Party, which is on the terrorist lists of NATO, has been fought by Turkey for many years.”

He considers that recently, Washington does not like some of the Turkish moves in foreign policy, especially those files in which it coordinates with Russia, which is what happened in the last agreement in 2020, which ended the second Karabakh war and increased the Russian-Turkish rapprochement at the expense of Western partners.

House Speaker Nancy Pelosi's recent visit to Armenia following the clashes has come under heavy criticism from Turkey, as a move that does not contribute to peace.

Oktay also called - via Twitter - Washington to clarify whether Pelosi's statements reflect the official position of the United States.

According to Batuhan Takesh, managing editor of the Turkish English-language Daily Sabah, the relations between Turkey and Armenia are a "major obstacle" to the full restoration of bilateral relations between the United States and Turkey.

In an interview with Al-Jazeera Net, Takesh explains that the discussion about the unfortunate events of 1915 remains symbolic, but the contradiction between the two parties seems more complex at the regional and international levels.

The Turkish journalist places Pelosi's visit to Armenia and the "controversial" statements she made there in the context of "winning the hearts of the Armenian community at home on the one hand, and consolidating its political influence on the other."

As for researcher Basil Hajj Jassim, he places Pelosi's visit in a broader regional framework, saying, "Pelosi's visit to Yerevan can be seen as a provocation for Russia, Turkey and Azerbaijan together, and it also aims to increase internal polarization in Armenia, given that the visit coincided with calls for Armenia to withdraw from the Security Treaty Organization." group led by Russia.

It is not clear where the Turkish-American relations will go with regard to the Caucasus file, which Hajj Jassem believes is “in its final stages in light of major complications,” adding that “Israel’s presence on the line of this crisis as a strong ally of Azerbaijan may ease Turkey in this aspect of relations.” Turkish American.