World Clean Up Day: a day to raise awareness of waste sorting

For the world day of cleaning the planet this Saturday, September 17, more than 2,200 initiatives are organized throughout France to pick up waste close to home. At the beginning of… 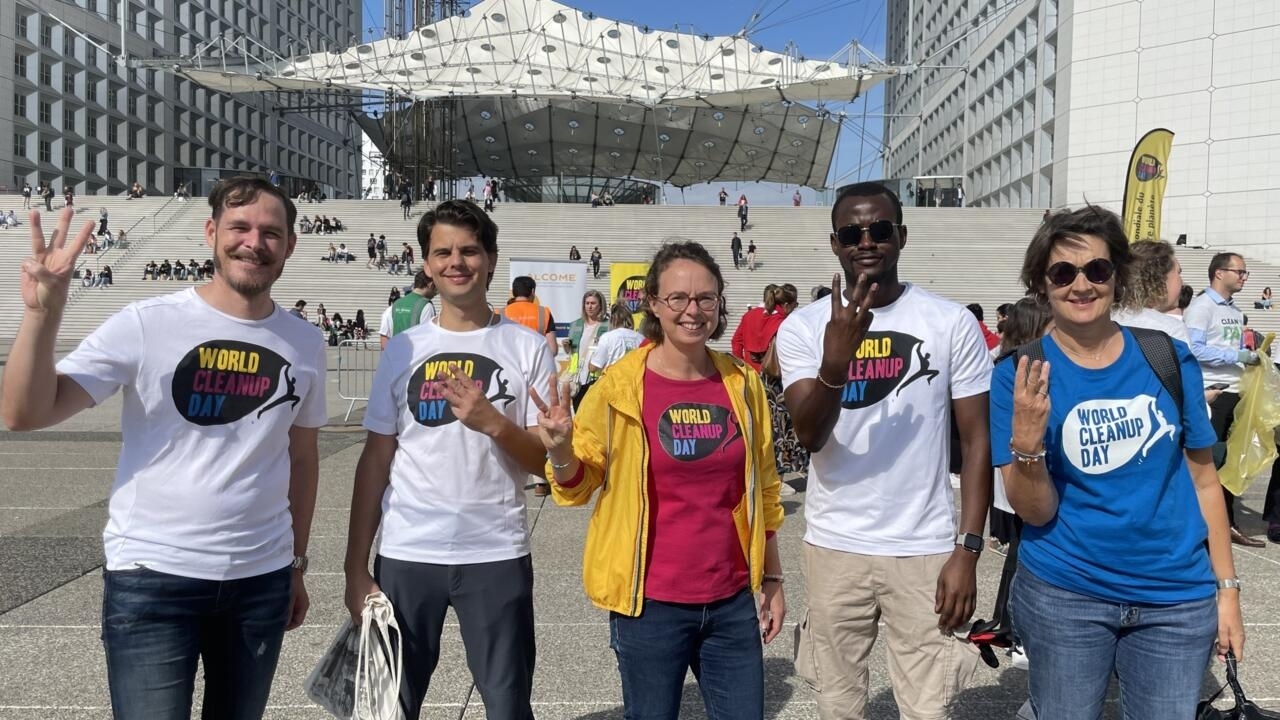 World Clean Up Day: a day to raise awareness of waste sorting

Virginie Guérin, the co-president, in the center.

Three fingers held up to form the "W" of their slogan: "We Want a World Without Waste".

For the world day of cleaning the planet this Saturday, September 17, more than 2,200 initiatives are organized throughout France to pick up waste close to home.

At the origin of these projects, the collective World Clean Up Day.

The objective: to promote a festive and educational day around the environment, while raising awareness of recycling and sorting waste.

Report during the collection operation at the Arche de la Défense.

“Are you a little warmed up?

Because casually, we play sports, we bend down, so pay attention to your back and bend your knees well.

a smile on her face, Virginie Guérin welcomes the various companies that have come to take part in the waste collection operation launched by her association,

At the foot of the Arche de la Défense this Thursday morning, groups of employees parade in front of the stand of the collective and two organizations specializing in the recycling of cigarette butts, Cy Clope and Alcome.

“At the end of your collection, fill the cigarette butts that you have collected in our bucket, because we will be compared with the other companies in the square, so there is a bit of competition.

And be sure to sort out recyclable and non-recyclable waste!

, advises a manager to his team.

Equipped with garbage bags, collection tongs and gloves, the small groups then spread out on each side of the square to cover as many areas as possible.

Virginie became the co-president of the French branch of the collective when it was created in 2017. With her zero waste family and her own start-up focused on sorting bio-waste, the founder of the association, already widely aware of environmental issues, has set itself the task of administering the platform which lists the 2,200 actions planned in France between Wednesday September 14 and Sunday September 18.

waste from the ground to put it in the trash is a very simple gesture.

After several hours, the participants bring their bags full of waste back to the stand.

Going through companies to mobilize citizens

The collective hopes to encourage company management to think about more sustainable and ecological management, by involving both employees and managers.

“If we raise citizens' awareness in their professional environment, then it will have an impact on the operation of the company itself

This urban planner expects a lot from this 5th edition of

, designed as part of the World Day for Cleaning the Planet on Saturday September 17.

It is no coincidence that so many large companies have responded to the appointment set by the association.

Companies with more than 500 employees must establish the carbon footprint of their activities every four years, accompanied by a plan to reduce them.

From 2023, these regulations must be extended to all companies with more than 50 employees.

Enough to motivate people to adopt a better ecological transition.

“It is possible that today some companies come to do this collection operation to look good.

We condemn this form of greenwashing, but it can remain beneficial if the specific action changes the way of seeing employees

One cigarette butt for 500 liters of polluted water

Encourage participation, and above all educate.

On their stand, a leaflet informs that a discarded cigarette butt is equivalent to 500 liters of polluted water.

For good reason, 2000 toxins are present in a single cigarette butt, which spread in the soil and in the rivers when the rainwater runs off.

volunteers , Patrick discovers all the effects garbage can have on biodiversity.

This student is the only one who came spontaneously to participate in the collection.

Bucket in hand, he ventures with a determined step towards the station at the bottom of the arch.

“I was supposed to take the metro, but I saw another group doing it.

I told them “good luck” and they told me to join them, so that's what I'm doing.

a smoker, Patrick admits to wanting to break with the habit of throwing his cigarettes on the asphalt.

"Choosing to take a bucket, put on gloves and pick up cigarettes, I hope it's an image that can mark other passers-by and dissuade them from throwing things themselves.

Small gestures far from being insignificant

Théo, Charles and Baptiste scan the edges of the slabs surrounding the arch.

Theo jumped up when he saw a cigarette butt left on the ground.

Like many other participants that day, the three young men are already very careful about recycling in their daily lives.

“I am already sensitive to all this.

But I find that by starting to do it during work time, it allows you to do it later in your private life.

Theo painstakingly runs his hands through the interstices to find rubbish.

While others go hunting, some are already returning with bags filled to the brim with rubbish.

“Can you imagine those who do this every day?

, launches an employee to his colleague.

Cy Clope volunteers collect cigarette butts to weigh each company's harvest before recording their weight in an inventory.

“I shouldn't say it, but we were surprised to collect so many cigarette butts in front of the Ministry of Ecological Transition!

, jokes an employee with her colleagues.

A minimal result compared to their objective of mobilizing 5% of the French population.

association does not despair.

Their next project: the

scheduled for March 18, 2023, to give a second life to their digital equipment and clean up their data.

Some figures around this world day

is a global civic movement born in 2008 and coordinated by the Estonian environmental protection association,

Let's Do It World

According to figures from the organization

Indonesia is the country that has gathered the most citizens around the initiative, with nearly 23 million people mobilized in four years.

In France, only 0.3% of the population has taken part in the clean-up operation since 2018, i.e. 760,000 people, particularly concentrated around the coasts and coastlines of the country.