News summary on the way home from work, Subsletter Evening. The 'Kim Gun-hee Special Prosecutor's Law' was adopted by the Democratic Party as a party argument, and all lawmakers participated in the bill's proposal. 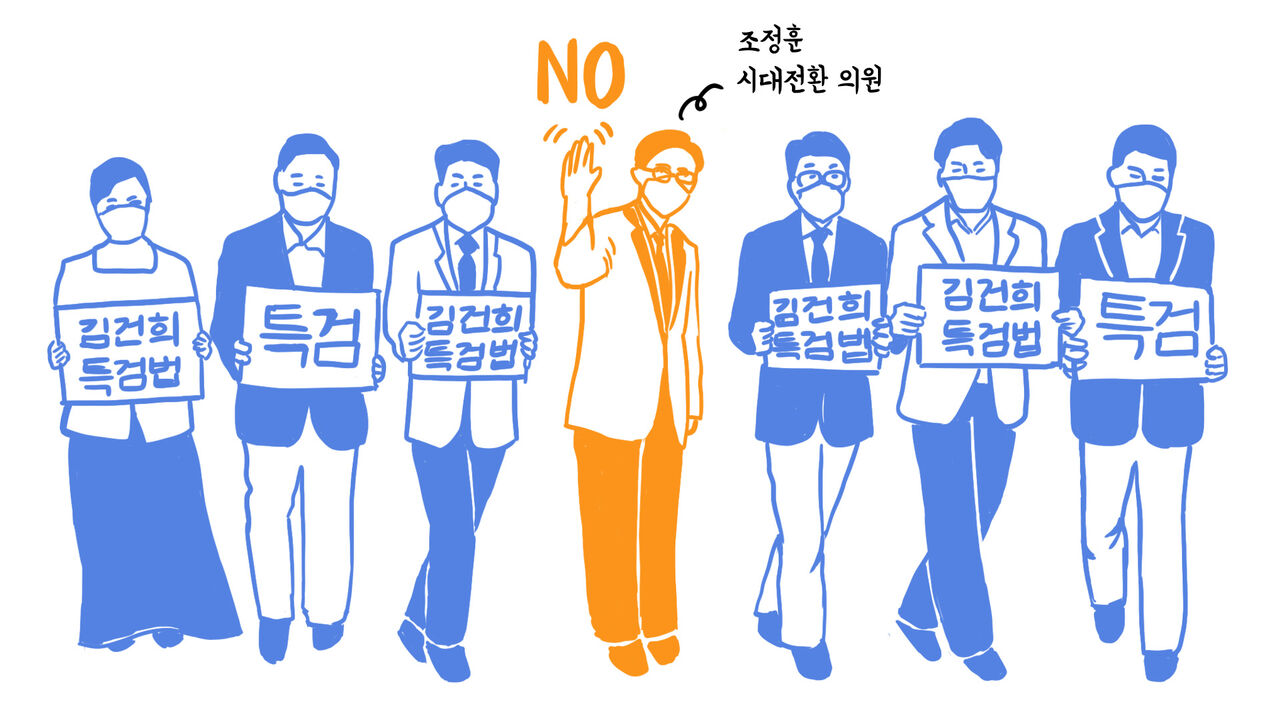 The 'Kim Gun-hee Special Prosecutor's Law' was adopted by the Democratic Party as a party argument, and all lawmakers participated in the bill's proposal.

Then the handling of the 'Kim Gun-hee Special Prosecutor's Act' becomes difficult, and even as a Democratic Party, there is nothing to be done, so it is a pain in the ass.

First of all, they are citing the reasons 'the Democratic Party acted rudely to put the special prosecutor on the Chuseok table' and 'It is a noise marketing and political show, so I will not participate as a supporting actor'.

First, in order to put it on the Chuseok table, I got the stamps of 169 people very quickly and proposed it before Chuseok.

I think it was very rude to treat the table before Chuseok and Chuseok table.

(..) Democrats are also well aware that the second is an impractical path.

Even if I agree, even if it is passed by the National Assembly, the president can veto it.

Didn't Lee Jin-bok, Senior Secretary for Civil Affairs, make it clear yesterday that he opposes it?

Then, looking at what this end game really is, this is the so-called noise marketing that the private sector is talking about, aiming for the noise in the process.

I thought it was a political show, and I was never invited to it, and I never said I would participate, but I think Jo Jung-hoon appeared on the poster for that show and wrote:

He also clearly stated his opposition to the fast track method.

There is no precedent for the special prosecutor's law to be handled in such a way.

There have been ten special prosecutions in the National Assembly.

I've never done it fast track in any case.

Because that's how fairness is guaranteed.

We will ignore this procedure and proceed as a special prosecutor.

I think it's very unreasonable.

He also pointed out the Democratic Party's 'neighborhood', and after mentioning that the bill was dealt with despite the opposition of public opinion, "It is a kind of one-sided push to take historical responsibility while conveniently and selectively citing public opinion poll numbers. I think the behavior also reflects the Democrats' introvert and collectivist tendencies."

In another interview, Rep. Cho also said, "The most humble thing is the politics of the wife." "I don't think it is desirable to do politics while touching your spouse. They are shouting 'opposition to the Kim Gun-hee Special Prosecution Act'.

Rep. Cho is under attack from the Democratic Party, but before we talk about it, let's look at why Rep. Cho is important in handling the 'Kim Gun-hee Special Prosecutor's Act'.

The first gateway to the Special Prosecution Bill is the Legislative and Judiciary Committee, and as the chairman of the judiciary is Chairman Kim Do-eup, the power of the people, there is a high possibility that the bill itself will not be introduced.

It can be blocked from the threshold of the standing committee.

For this reason, the Democratic Party is actively considering a detour, that is, a 'fast track' card.

Jin Seong-jun, senior vice floor leader of the Democratic Party, once said, "If (the Judiciary Chairperson) does not deliberately propose or do not review, the issue of fast track designation can be actively reviewed."

However, for Fast Track designation, 'at least two-thirds of the standing committee members', that is, the approval of at least 11 members, is required, but there are only 10 members of the Democrats' Judiciary Committee.

Only one person is not enough.

So Rep. Cho Jung-hoon got the 'casting boat', and the Democratic Party was initially optimistic that opposition-oriented lawmaker Jo Jung-hoon would approve.

However, it was difficult for Assemblyman Cho to openly oppose it.

Even if it goes through the Kim Do-eup-Jo Jung-hoon gate and passes through the standing committee and even the plenary session of the National Assembly, President Yoon Seok-yeol's exercise of veto power could be another variable.

In order for the bill to return to the National Assembly due to the exercise of its veto power and to be re-resolved, the approval of at least two-thirds (200 seats) of the total number of lawmakers is required, because the number of seats in the Democratic Party cannot be dealt with alone.

The Democratic Party is attacking Rep. Cho Jung-hoon every day.

"Isn't it shameful. The allegations related to Mrs. Kim Gun-hee cannot simply be 'tumbled', and the investigative agencies are bowing their heads in front of the living power" (Jeon Jeon-gi), "The servant (member of the National Assembly) must do what the master (the people) tells him to do." (Chung-rae Jeong), "I have to take responsibility for history" (Kyung-tae Jang) was criticized.

Rep. Park Beom-gye also aimed at Rep. Cho, and yesterday (14th), on KBS radio, he even said, "I want you to look back on how Rep. Cho Jung-hoon came to the National Assembly."

I would like you to take a moment to look back on how Rep. Cho Jung-hoon got into the National Assembly.

Rep. Park Beom-gye brought up the talk of Rep. Cho's entry into the National Assembly, that is, the 2020 general election, and it seems to have evoked the point that 'Rep. Cho was able to enter the National Assembly thanks to the satellite party of the Democratic Party'.

Rep. Cho ran for the Democratic Party's satellite party for proportional representation, the Citizens' Party, and was elected.

Regarding this, Rep. Cho Eung-cheon of the same party said, "(Rep. Park's remarks) are not polite to fellow lawmakers," so maybe that's why.

Rep. Park said in an SNS post today (15th), "I didn't point out that I became a member of the National Assembly thanks to the Democratic Party."

He took a step back.

Nevertheless, the offensive against Rep. Cho continued with the words, "'It's tiring to touch your spouse. Let's be tough' - this is not" "The people decide the special prosecutor Kim Geon-hee bill. We represent the people."

I respect your convictions, Rep.

I am not pointing out that you were elected to the House of Representatives thanks to the Democrats?

Touching your spouse is awkward.

ㅡ This is not the case.

That spouse must be a normal person.

ㅡ I don't think it's a joke on the author's street, not a place to discuss state affairs.

We represent the people.

Rep. Cho is also said to be receiving text bombs from Democratic supporters.

In an interview with 'Jungang Ilbo', he said, "I receive 700 to 800 text bombs a day. Conversely, some Democrats also send me text messages saying, 'Are we guarding the Lee Jae-myung shrine?'"

The idea is that the Democratic Party will continue to fight the opinion of the special prosecutor despite the opposition of Rep. Cho Jung-hoon.

In particular, when the public opinion polls released during the Chuseok holiday showed a high 'opinion in favor of the special prosecutor', it is said that they are going for a strong drive for the time being.

Which first lady in history has had this kind of fruit?

Still, nothing has been clearly explained.

Far from giving a proper explanation, the presidential office is consistently ignorant of his wife, and is focused on covering up allegations, while the prosecution and police are busy disposing of acquittals.

This is why the Kim Gun-hee Special Prosecutor's Office Act came out and why the people are outraged.

In the Chuseok public opinion poll, more than half of the people (64%) judge that the acquittal of Kim Kun-hee by the investigative agency is unfair.

In addition, as the prosecution and police continue to investigate not only Lee Jae-myung, but also Lee's family, the Democratic Party has no choice but to intensify the lending offensive.

They are raising the intensity of the backlash by putting forward a frame of political oppression.

However, at the same time, some skeptical opinions are coming out from within the Democratic Party, and Representative Lee Sang-min and Cho Eung-cheon, who are known as minorists, are representative.

Their voices are not loud in the party.

There is a perception that they are 'those people in the first place', and as the confrontation between the ruling and opposition parties is intensifying, the skepticism of the Special Prosecutor's Office is inevitably buried in a strong voice.

There was an incident where a woman in her 20s was murdered, in front of the women's restroom at Sindang Station on Seoul Subway Line 2, where the incident occurred.

There are flowers of remembrance and a letter calling for an end to hate crimes.