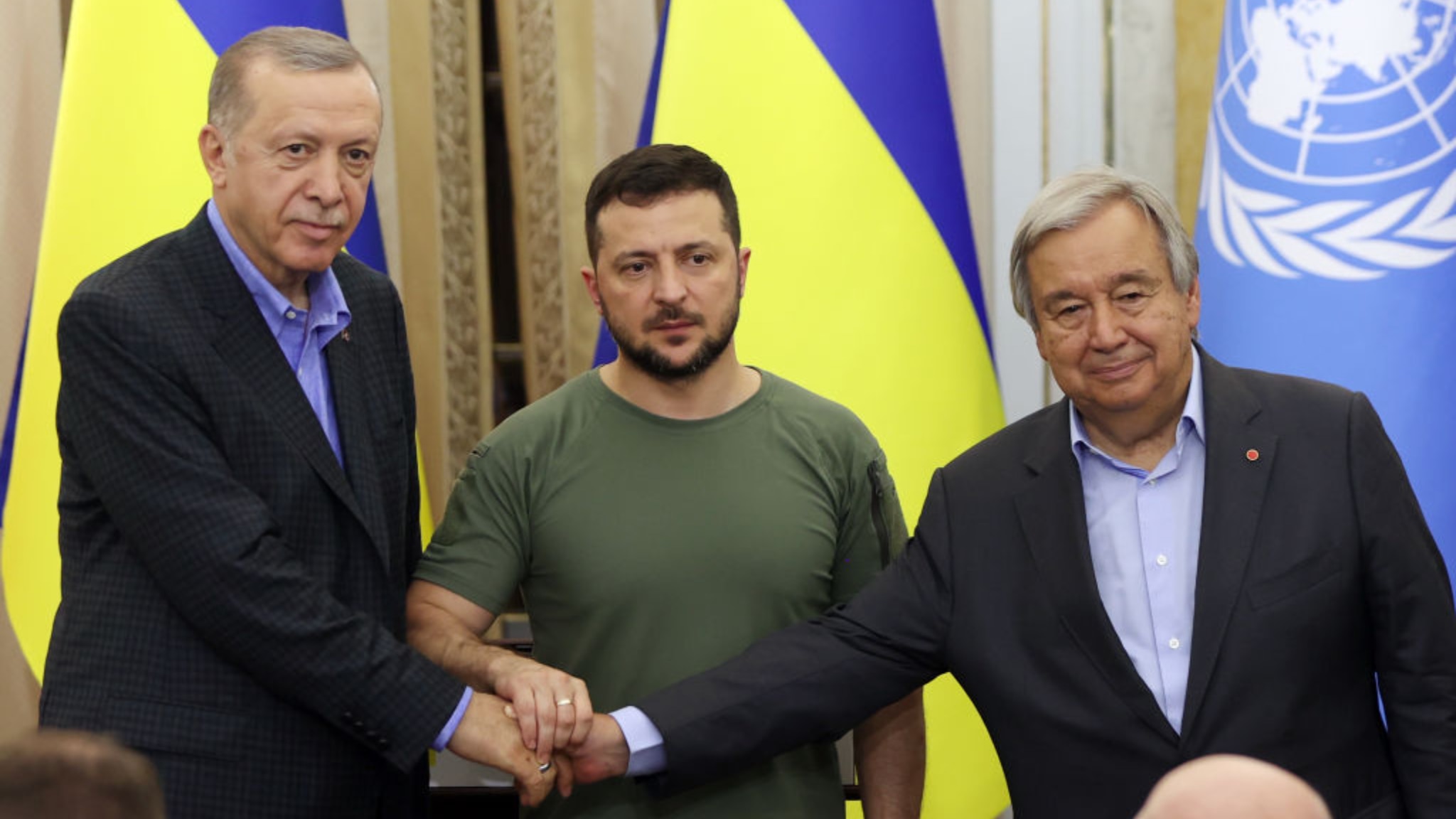 After the trilateral summit between the Ukrainian president, Volodymyr Zelensky, the Turkish president, Recep Tayyip Erdogan, and the UN secretary general, Antonio Guterres, in Lviv, after 40 minutes of trilateral meeting, the three leaders gave life to a conference final print.

declared that "Turkey will continue to evaluate with the Russian President (Vladimir) Putin and the Russian side the outcome of the meetings" held today in Lviv, Ukraine.

Erdogan met Zelensky and Guterres in a trilateral in which he mainly discussed "how to put an end to the conflict between Russia and Ukraine", said the Turkish leader in the press conference reported by Anadolu.

"Turkey supports the territorial integrity and sovereignty of Ukraine", said Erdogan who then said: "We will give the necessary support for the reconstruction of Ukraine".

And on the duration of the conflict, the Turkish leader declared: "I personally believe that the war can end at the negotiating table and basically Guterres and Zelensky have the same opinion".

Erdogan then highlighted the "positive" repercussions that the Ukrainian wheat export agreement could have on the crisis and stated that in order to restart the negotiation process "the international community must show more responsibility".

"We are ready to play our role as facilitators and mediators with the aim of resuming the negotiations" to arrive at the ceasefire between Ukraine and Russia that had started in Istanbul, Turkish President Recep Tayyip Erdogan also said.

Guterres invokes the spirit of compromise

United Nations Secretary-General Antonio Guterres urged Moscow and Kiev to show a "spirit of compromise" and to ensure the continued success of the grain agreement that allowed Ukraine's grain exports to resume.

Speaking after talks in Lviv with Volodymyr Zelensky and Turkish President Recep Tayyip Erdogan, Guterres recalled that in less than a month 21 ships left Ukrainian ports as part of the agreement signed in Istanbul on 22 July and 15 ships have left Turkey for Ukraine to load grain and other food supplies.

"But that's just the beginning. I urge all parties to ensure continued success," he said. "From day one, the parties have worked professionally and in good faith to keep the food flowing. I appeal for this to continue. and so that they overcome all obstacles in a spirit of compromise and definitively resolve all difficulties ".

"Any damage to Zaporizhzhia is suicide"

"Any potential harm to Zaporizhzhia is suicide."

This was stated by the UN secretary general, Antonio Guterres, at the press conference with the Ukrainian president, Volodymyr Zelensky, and his Turkish colleague, Recep Tayyp Erdogan, in Lviv, Ukraine.

Guterres then stressed that "in close contact with the IAEA, the United Nations Secretariat has assessed that in Ukraine we have the logistical and security capacity to support any mission of the Atomic Energy Agency at the Zaporizhzhia nuclear power plant from Kiev, on condition that Russia and Ukraine agree ".

"We must spare no effort to ensure that the facilities or surroundings of the plant are not a target of military operations", added the UN secretary general, reiterating that "military equipment and personnel should be withdrawn from the plant" and "A further deployment of forces or equipment on the site must be avoided but the area must be demilitarized."

"In less than a month 21 ships left from Ukrainian ports and 15 ships left Istanbul for Ukraine to fill up with grain and other food supplies. As we speak, more than 560,000 tons of grain and other Ukrainian farmers' food are on their way. to markets around the world ".

This was stated by the UN secretary general Antonio Guterres in Lviv.

"The positive momentum on the food front reflects a victory for diplomacy, for multilateralism, it is an unprecedented agreement, but it is only the beginning".

"The visit of the Turkish president to Ukraine is a powerful message of support from such a strong country".

The Ukrainian president, Volodymyr Zelensky wrote on telegram, reporting that "during the meeting in Lviv, we discussed with Recep Tayyip Erdogan the possibility of improving the wheat initiative, the situation around the Zaporizhzhia nuclear power plant and nuclear blackmail. of the occupiers, the large-scale theft of grain by Russia in the temporarily occupied territory of Ukraine ".

"Defense cooperation issues were also touched upon", Zelensky wrote again, saying he was "certain that the further expansion of cooperation between Ukraine and Turkey will strengthen both sides".